Too Fast to Measure 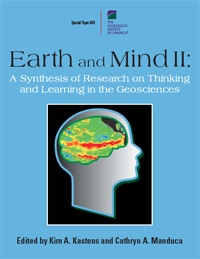 However, having shared my thrill at holding the book in my hands, I have to admit that there are some ideas in the book that I have already outgrown during the months that the book has been in production. A distinctive feature of the book are a set of concept maps that map the intellectual territory of each of the book's major themes: spatial thinking, temporal thinking, systems thinking, and field-based teaching and learning.

Readers of Earth & Mind: The Blog had a preview of a portion of the temporal thinking concept map in post on Temporal Reasoning in Geosciences. One limb of that concept map deals with "Timing of Observations versus Process." This relative timing matters because it controls the nature of the reasoning and evidence that you can put forward to make logical connections between what you can observe and the processes that caused the observable phenomena. The published concept map sketches three possibilities:

I now realize that there is a fourth possibility: 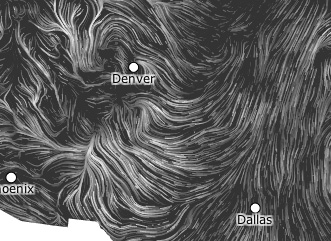 Wind Map by HINT.FM. Dynamic original is here. (more info) Used with permission.
An atmospheric scientist, Yochanan Kushnir, first got me thinking along these lines, when we were discussing the relative virtues of observational data versus model output. He helped me to see that for something as fast moving as the atmosphere, even the best observational data set is only temporarily accurate, and that a model can actually be a more truthful representation of Nature than any single observational data set. This idea took some getting used to for me, as I had spent my geo-career observing and mapping structures that sit still for their portrait.
I was reminded of this issue recently when I saw the most amazing dynamic visualization of wind patterns (more info) over the continental United States. The beautiful clipping at the right shows a small fragment of the map for May 12, 2012. You've got to go see the original, where the wind lines for today are swirling and swooshing before your very eyes. The data come from the National Digital Forecast Database, and the visualization is by Fernanda Viégas and Martin Wattenberg who collaborate under the name HINT.FM. So I feel a need to add a new node to the Time in Geosciences concept map; here it is:

Comment? Start the discussion about Too Fast to Measure