Congratulations to Marcia McNutt, who has been confirmed by the Senate as the Director of the U.S. Geological Survey.

I trailed a few years behind Marcia in the doctoral program at Scripps Institution of Oceanography in the 1970's, when women scientists were scarce at Scripps and non-existent in the higher reaches of the profession. Times have indeed changed: 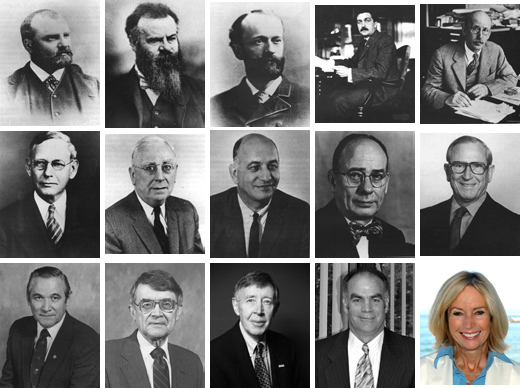 The Directors of the U.S. Geological Survey, 1879 to the present <photo source info>

In describing her background during confirmation hearings before the Senate Committee on Energy & Resources, Marcia singled out her undergraduate "Introduction to Geology" course with Professor John Lewis of Colorado College:

I majored in Physics at Colorado College, but my favorite college course was Introduction to Geology, taught by Professor John Lewis. Colorado College uses the block plan in which students only take one course at a time for a month. Introduction to Geology is two blocks long. So my first two months at college were spent with Doc Lewis and about 19 other students scrambling around the Front Range with our back packs and sleeping bags trying to piece together the geologic history of the Southern Rockies from first principles. We never cracked a book the entire time. I was drawn to the grandeur of the Earth sciences and awed by the time and space scales upon which Earth processes played out. No lab coat. No test tube. Science outside!

Don Woodrow called my attention to Marcia's praise of the impact of a great "Introduction to Geology" course in her Senate confirmation hearing, contrasting this to the nasty and ill-informed dig about "Rocks for Jocks" in a recent NY Times op-ed piece by Calvin Trillin.

Inspiration for my graphic of the USGS Directors: 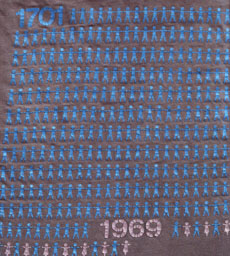 The reason that T-shirt graphic and the USGS Directors graphic work so well (in my opinion) is given by Edward Tufte in his 1997 book Visual Explanations: "Multiples in Space and Time: Multiple images reveal repetition and change, pattern and surprise--the defining elements in the idea of information. Multiples directly depict comparisons.... Multiples amplify, intensify and reinforce the meaning of images." (p.105)