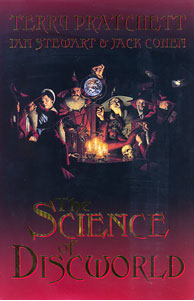 In The Science of Discworld, Terry Pratchett, Ian Stewart & Jack Cohen make the case that education necessarily involves telling "lies to children." We realize that telling lies to children is a pretty common part of traditional parenting (Santa Claus, stork, etc.), but in school! in the citadel of learning and truth! How can this be?

After some discussion of this shocking notion, we realized that it is almost impossible to teach science at the elementary level without simplifying in a way that could be labelled as a "lie." The trick then, would seem to be to figure which kinds of simplifications are least harmful. Here are the criteria we have so far:

Digging deeper into Pratchett et al's fine print, we find that their concept of "lies-to-children" is actually rather like the intermediate steps in a learning progression. They define a "lie-to-children" as "a statement that is false, but which nevertheless leads the child's mind towards a more accurate explanation, one that the child will only be able to appreciate if it has been primed with the lie."

This is a fascinating topic. My students have often said to me, after learning things in upper level courses, that "everything we learned in intro class was a lie!" They were obviously exaggerating, but they were expressing the realization that things aren't as simple as they had originally thought. I think that's a really great discovery about one's own knowledge.

But I don't care for the term "lie" in this context. Approximations, such as the moon causing the tides in the first bullet point, are not attempts to deceive. There are plenty of people in the public who are distrusting of science. When they hear the term "lie", they aren't going to think "an approximation that helps me learn in steps". I don't see how using this terminology of "lies to children" is at all helpful to science education, and it could instead serve to turn off more people and cause more confusion between scientists and the public. Approximations, rather than being attempts to deceive, are attempts to understand. They are not lies.

This topic actually came up in a conversation I had with another geoscience blogger last week. He had made a statement in a blog post that he described as a simplification, but I felt that his simplification went too far as to be a false statement. We had a nice discussion about that.

This brings me to the point: when communicating with the public or teaching students, it is going to be necessary to simplify, approximate, and eliminate jargon, but it is critically important not to say anything that's demonstrably false. I think your bullet points above to a good job of getting us there, but I think we need to be clear and careful about that, and using this terminology of "lies to children" I think confuses that important reality.

This post was edited by Martin Farley on Nov, 2011
Alistair Fraser in his website "Bad Meteorology" quotes Thomas Cardinal Wolsey "Be very, very careful what you put into that head, because you will never, ever get it out." His website is all about correcting erroneous ideas about meteorology. He contrasts simplification, which is OK, with simplistic (simplified so much it is no longer correct), which is wrong. I would put what Dr. Carrigan describes in the simplification category.

I would agree that approximations to the correct explanation are not lies.

We need to be careful in how we say things. It is fairly common for geologists to say, as shorthand, that there is "time missing" at an unconformity. Taken literally, that statement is wrong. What is missing is rock record of an interval of time.

On the other hand, there are wrong ideas floating around out there that my students arrive with. For example, in my pretest for Earth Science, practically all students will answer that being in a car during a lightning storm is (relatively) safe because of the rubber tires. That is merely wrong.

There are (K-12) teachers who lie, often when they don't know better, but can't bring themselves to say they don't know. A colleague's 4th grade daughter came home one day in a high state of indignation because a classmate had asked what causes lightning and the teacher had said "lightning is caused by two clouds bumping together." My colleague's daughter didn't know the correct explanation (which is hardly simple), but knew this explanation was wrong.

A third category involves faculty who think they know what something means, perhaps from its name, but they're not right. A key example of this is the greenhouse effect. I very much disturbed a biology faculty member at my university by pointing out that the atmosphere does not act like a greenhouse despite the name. I hope she is explaining it correctly now in her environmental science classes.

This post was edited by Kim Kastens on Feb, 2013
Ravit Ducan and Ann Rivet have a very nice essay in the 25 January 2013 issue of Science magazine in which they discuss the role of learning progressions in the Next Generation Science Standards. Their comments on the importance of "stepping stone ideas," which are not fully complete but lay the groundwork for future understandings, are particularly interesting in the context of this blog post:

"...[learning progressions] are grounded in research regarding how students actually come to understand core ideas in science... This is critical because intermediate steps in a LP may include understandings that vary from the canonical knowledge of science. ... Although inaccurate understandings can be conceptually productive stepping stones, the extent to which these should be reflected in standards and curricula is controversial. Developers are reluctant to present wrong ideas in standards, and teachers are concerned about teaching them...."

After reviewing the pros and cons, Ducan and Rivet take the position that "... it is counterproductive to shy away from such inaccuracies in the development of standards, assessments, and curricula... standards and curricula should set as goals such stepping-stone ideas and clearly articulate the basis for their conceptual usefulness."

I'm inclined to agree with them.

« But should we call them "lies"?       Embedded Energy versus Embedded Cognition »