But should we call them "lies"?

First, Dana discovered a fabulous cartoon, the exactly speaks to the topic of the post. Wonderously, the cartoon is published under a creative commons license, so I can reproduce it here for you: 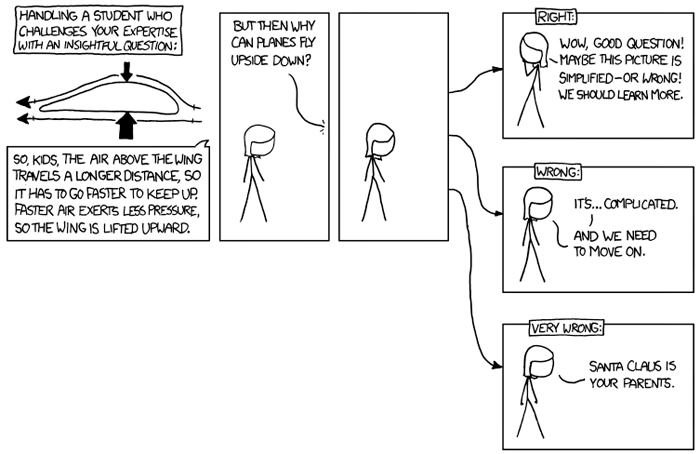 This cartoon comes from xkcd.com, which describes itself as "a webcomic of romance, sarcasm, math and language." Check it out--there is lots more funny sciencey stuff there. And, in case you're wondering, an explanation of why airplanes can fly upside down.

Anyway, the cartoon is an illustration of the third option we described in our previous post: "If a student in the class can spot an inconsistency or contradiction that the teacher can't explain, that's a problem..." Teacher #1 in the cartoon managed to turn the incipient problem into a learning opportunity. Teachers #2 and #3 just changed the subject.

The other new development is that reader Charles Carrigan raised the question of whether we should really be calling these things "lies." This is a good question, and actually Earth & Mind co-editor Cathy raised the same question before the post went live. Dana and I didn't originate the phrase "telling lies to children"; we just plucked it out of The Science of Discworld because it was so edgy and memorable. It seems that there are two different definitions online for "lie (n)": "an intentionally false statement" or "a false statement made with deliberate intent to deceive." Under the first definition, Pratchett et al are probably OK to be calling a statement that is oversimplified to the point of being untrue "a lie," provided that the speaker knows that the statement is false. Under the second definition, they are on shaky ground.

For me personally, I think that the shock value of the phrase "telling lies to children" has had a positive effect on my teaching practice. I was in an 8th grade classroom last week, doing an activity for a project on how teachers teach and students learn with physical models. The activity was supposed to be eliciting their pre-instruction understanding of a model of deposition, and there were some words that they didn't recognize. I was giving them definitions as needed, and writing the definitions on the board. So I defined "deposition," and "coastline." Then someone asked about "velocity," as in "Which particle will most likely settle to the bottom first as the velocity of this stream decreases?" I said "velocity means speed," and wrote that on the board. But as the words came out of my mouth, and as my marker moved across the whiteboard, I saw flashing warning lights and heard alarm sirens sounding in my head: "Lies To Children; Lies to Children; Lies to Children." I knew, beyond the shadow of a doubt, that this was not the moment to digress into a mini-lesson on scalars and vectors. But at the same time I also knew that what I was telling those kids was not scientifically correct.

I really disliked the feeling of those mental flashing lights and the alarm siren blaring out "Lies to Children," and I know that I will try hard to avoid repeating the experience. It is certainly the case that sometimes drastic oversimplifications are the only option in explaining science concepts to learners. But sometimes there is a work-around that avoids a false statement. The desire to avoid those "Lies to Children" warning lights and sirens is going to make me look harder for those work-arounds in the future. In this case, in retrospect, I could have re-written the sentence "...as the speed of this stream decreases..." without actually giving a definition. At a minimum, I could always say "This isn't the whole story, but here's a way to start thinking about it...."

But should we call them "lies"? --Discussion

I think it fairly simple here to again focus on not saying anything that's actually false. Saying "velocity is speed" is technically false, but one could easily say "velocity is like speed" and be perfectly fine. Both velocity and speed have the same kinds of units and refer to a rate of motion. You are absolutely correct that a digression into scalars & vectors probably isn't appropriate for an 8th grade science course!

Where is the teacher’s box in the cartoon for “I don’t know”?

I’m not sure the second box is necessarily wrong. Depending on the context, it may not be worth the class time to worry about subtle or advanced complications that are beyond the scope of the class. See example below.

Unlike you, I don’t think that worrying about velocity as a vector for streams should be a serious concern in a discussion of deposition and coasts for 8th graders. You might worry more about the depositional dip if you’ve also told them about the Principle of Original Horizontality.

The rest of my response may come under the heading “If you ask a complex question, a geologist cannot give a simple answer.”

I think we have two challenges: 1) how to simplify correctly for a particular audience what can become complex in detail and 2) how to deal with phenomena whose explanation we know is incomplete. A secondary part of the second of these is that many people may not know that the explanation is incomplete.

As an example of the first, I teach Earth Science as our basic gen ed class and I spend about one class meeting on tides. Suppose a student asks how we know that the Sun’s influence on tides is about half that of the Moon. For my Earth Science class, the key thing to know is how the Sun modifies the Moon’s tides, not the details of how we know how much. At some point, “It’s complicated…and we need to move on” is the right answer.

As an example of the second, let me use the bald cypress (Taxodium distichum). This tree will grow adjacent to or even in bodies of water. When it does so, it grows protuberances on its roots that stick into the air and are known colloquially as “knees.” The traditional explanation is that the knees are a way for the plant to ensure its roots are oxygenated even underwater. The problem with the traditional explanation is that there is no evidence that it is true (so far as I know, there is no evidence that disproves it either). I have heard a botanist who is a member of the National Academy of Science give the traditional explanation without a word of qualification.

There are lots of things in the earth sciences where a) we don’t know exactly and b) the right answer may not be widely known. Here are a couple of oceanographic examples that worry me that some student might ask about in an intro class:

Water bodies don’t warm up much during the day (unlike adjacent land) because of the high heat capacity of water and the cooling that results from evaporation. Which is more important? (I think from putting together items from different places in a graduate oceanography text that evaporative cooling is more important, but it isn’t explicitly stated. Elementary textbooks commonly talk about heat capacity and not even mention evaporative cooling.)

The Gulf Stream is commonly included in discussions of thermohaline circulation. It is also in (majority?) part a westward-intensified boundary current of the North Atlantic Gyre. How much is each? I have looked in multiple oceanography texts and no one addresses this. This is important when you run into people who assert that climatic warming might shut down thermohaline circulation and thus the Gulf Stream. (This might then lead to a discussion of the role of the Gulf Stream in keeping Europe warm…which more and more is beginning to sound like the traditional explanation for cypress knees.)

I think we worry too much about displaying "pre-packaged" science to our students. We might be worried about confusing them or maybe we see science that way ourselves. Students need to know that the answers are not complete. There are claiims made but there are differing levels of reliability to those claims, based on assumptions made, biases incorporated, etc. Science is the process of making models. James Conant (1947) said it was the delopment of conceptual schemes that result from the "fight through thickets of erroneous observations, misleading generalizations, inadequate formulations, and unconscious prejudice." This is the part we never (or seldom) reveal to students; like some deep dark secret. If we were just honest. "Hey we are making models. They are simplified and utilitarian,but by defintion, they are also wrong. They are NOT the phenomenon, but a working model of the phenomenon. We will keep it as long as it is useful to us. We can change it to be more useful, or we may discard the original for something more useful, or we may keep it (as in the case of Newtonian mechanics) to perform deeds where it gives a good enough approximation of reality." Then the discussion changes to "What is the purpose of the model? How does it fulfill that purpose? You want to know about these abberations? They result from the simplification. Can we change the model to make it work better?" In this way, students haven't been lied to per se, because they are in on it. And science is no longer memorizing facts, but understanding relationships and process that are part and parcel to the model.