"Embedded energy" refers to the energy that was used to create an object--including mining or growing or catching the raw materials, manufacturing and assembling the pieces, transporting the raw materials and finished product, and installing the object in its place of use. A spoon, to take a simple example, required energy to mine the ore, to smelt the ore to make the metal, to shape the metal into spoon shape, plus more energy to transport ore to the smelter, metal to the factory, spoon to the store. Embedded energy is contrasted with the energy required to power or use the product during its lifetime.

There is a somewhat parallel concept, which refers to the knowledge and thinking that was required to design and perfect the object. In his seminal book, Cognition in the Wild, Edwin Hutchins writes of navigational instruments:

"In the Western tradition, physical artifacts became repositories of knowledge, and they were constructed in durable media so that a single artifact might come to represent more than any individual could know... artifacts came to embody kinds of knowledge that would be exceedingly difficult to represent mentally... Many of the instruments of Western navigation are based on the principle of building computational constraints of the task into the physical structure of the artifact." (Cognition in the Wild, p. 96).

Hutchins then goes on to elaborate his idea using examples of the astrolabe, the compass rose, and the navigational chart. In his view of "distributed cognition," thinking doesn't just happen inside one brain; it is distributed across multiple brains, including the brains of people who aren't actually there in the room, people whose thinking is captured in the design of the astrolabe, compass rose, navigation chart or other artifact. 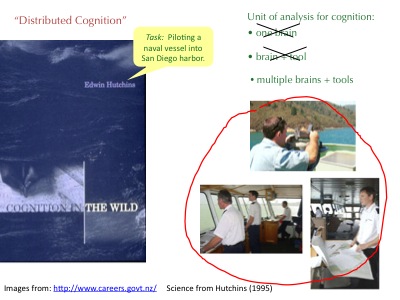 View Kim's powerpoint from 2008 New Tools Cutting Edge workshop
In my geologist's mind, I had been referring to these insights in artifacts as "fossil cognition," by analogy with trace fossils. For example, the trace of the cognition of Gerardus Mercator is present in every navigational chart, even though he is long dead.

I notice two big contrasts, though, between embedded cognition and embedded energy.

The first big difference is that embedded cognition can be carried forward from artifact to artifact with little loss of value, whereas embedded energy is almost entirely destroyed when the specific artifact comes to the end of its useful life. Mercator's insight can be used again and again, in generation after generation of nautical charts, a gift that keeps on giving. But the energy that went into growing the trees to harvest the wood to manufacture the paper to make the chart is a sunk cost. At best, a small amount of energy can be saved if the paper is recycled when the chart is worn out or out of date.

The other big difference is that we have ways to quantify embedded energy, but no way to do so for embedded cognition. The methodology for embedded energy is still a work in progress, and practitioners are still struggling over what exactly to include and exclude when summing up the energy embedded in, for example, a building or a road or a kilogram of epoxide resin. But, there are, nonetheless, methods to come up with how much energy was invested in mining or growing the materials, and manufacturing and transporting the final product. We have units for embedded energy: for example, MJ/kg of raw material.

For embedded cognition, we have no units. So let's make up a unit: the "Mercator," the amount of embedded cognition equal to the cognition included in the Mercator chart. The trouble is that we have no way to compare the number of Mercators in a nautical chart with the number of Mercators in, let's say an automobile, or my laptop computer, so the Mercator fails as a unit of measurements. Another thought would be to take the least patentable increment of invention as our metric. I spent Hurricane Irene in a house on the coast of Maine with a crowd of relatives including two lawyers, so I tried out this idea on them. It turns out that requires a combination of novelty, utility, and nonobviousness; these complex criteria seem more like an invitation to an argument than like the germ of an idea for quantifying embedded cognition.

Nonetheless, from an educator's perspective, how wonderful it would be if we had a reliable, consistent methodology, with quantitative units, for measuring embedded cognition in our students' products. We could assess and reward students for such thinking, and we could evaluate which of our pedagogical strategies most successfully fosters original cognition. This seems far-fetched--but once upon a time quantifying energy was also beyond human capability.

"Embedded" versus "embodied": The term "embodied energy" is sometimes used rather than "embedded energy"; they seem to be synonyms as far as I can tell. Hutchins (1995, p. 96) writes of how "artifacts came to embody kinds of knowledge...." So this essay could have been entitled "Embodied energy versus embodied cognition." I didn't do that because "embodied cognition" already has another meaning: the idea that cognition is profoundly influenced by aspects of the thinker's body, such as how the thinker moves and senses its/his surroundings.

See also Kim's blog post on Turning Nature into Numbers for further thoughts on trying to quantify that which had previously been known only through human experience.

One final random thought: Maybe it will turn out that embedded cognition is actually just another form of embedded energy. When an fMRI measures the activity of a portion of the brain, what it is actually measuring is an increased blood flow, which is responding to a need for oxygen, which is used up in the process of generating energy from glucose.

Comment? Start the discussion about Embedded Energy versus Embedded Cognition