What precursor understandings underlie the ability to make meaning from data?

I've been thinking a lot recently about how scientists and students make meaning from data, spurred in part by the Earth Cube education end-users workshop. Among other things, I've been trying to understand what kinds of deeply foundational understandings might be constructed by young children through unstructured observation using the human senses, and then later re-purposed as they begin to work with data.

Here is one candidate: Future data users need to understand that:

Carol Cleland (2001, 2002) has written eloquently about how geologists do their science by examining and interpreting the traces left by the events of the past. However, it seems to me that at some level many (or maybe even all) data sets can be viewed as traces of events. Many of our scientific observation techniques are attempts to generate artificial traces (aka "inscriptions") for phenomena which do not leave natural traces. Think of tracks of drifting oceanographic buoys, or sonograms of bird calls.

It seems to me that this understanding--that events leave traces, and by looking at the traces we can make inferences about the events--is very deep seated in humans, and begins to develop very young. As an example around which to build up my thinking on this topic, I've been considering the case of a spilled glass of milk. 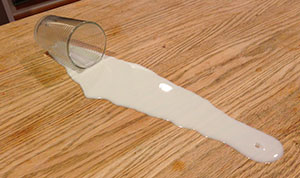 Provenance: Kim Kastens, Lamont-Doherty Earth Observatory
Reuse: This item is offered under a Creative Commons Attribution-NonCommercial-ShareAlike license http://creativecommons.org/licenses/by-nc-sa/3.0/ You may reuse this item for non-commercial purposes as long as you provide attribution and offer any derivative works under a similar license.
Upon observing a spilled glass of milk, I think that a relatively young child can form a mental model of what happened:

This mental model actually has quite a few sophisticated features, features in common with adult scientific models.

First of all, there is the concept of the active agent, the "something" that knocked the glass from the side. This agent has certain known attributes but is nonetheless not precisely specified. The active agent was certainly moving. The agent was most likely alive (a cat, a child), but could possibly have been inanimate (a ball, a big gust of wind). The ability to populate a mental model with an agent that has some known attributes or behaviors, but that is not individually specified, seems to me like an important pre-science interpretive skill, which could underlie the ability to entertain multiple working hypotheses in science.

Consider also the timing of the event. The child knows that the spilling event happened before he or she entered the room, because s/he doesn't remember seeing it happen. And s/he can infer that it didn't happen many days ago, because if that were so the milk would be dried up rather than fluid, and it would smell bad by now. Thus the timing of the event is bounded, but not specified. This is a common situation for geologists, who often can put upper and lower boundaries on an event in the geological record, but cannot pin it down to a specific date, as for example, when Bill Ryan and Walter Pitman were first trying to pin down the date when the Mediterranean waters spilled into the Black Sea.

In addition, this mental model involves some notion of normalcy, that it is normal for a glass to be vertical and for milk to be inside the glass. And some concept of fluids, to allow the notion that the milk used to be in a cylindrical shape but changed into a thin sheet when it was released from its confining container.

Further refinements are possible. The observer could infer the direction of motion of the active agent by the direction that the milk was spread out relative to the glass. And s/he could infer something about the vigor of the knock and the rotational velocity of the tipping glass by how elongate the spill was in the inferred direction of the impact.

Development of this ability could be researched by giving kids of various ages a drawing or photograph of the end state of a trace-producing event, asking them to draw a series of pictures showing how this scene got to be the way it is, and then explain their drawings to the experimenter. This same task could also be used as a learning activity, rather than a research task. I would speculate that younger kids would sketch just one working hypothesis, one sequence of events (for example, just the cat knocking over the glass) and would not allow for other possible working hypotheses. Eventually kids would get to an age were they could entertain multiple specific working hypotheses (maybe it was the cat, maybe it was younger brother), especially when questioned about whether there might be any other possibilities. Quite a bit later, I suppose, would come the ability to grasp and articulate the generalization that there was a knocking-over-agent with an unknown identity but certain knowable attributes. 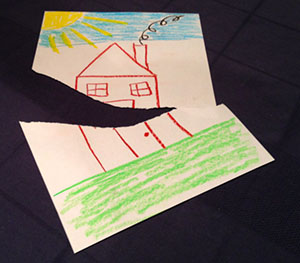 Provenance: Kim Kastens, Lamont-Doherty Earth Observatory
Reuse: This item is offered under a Creative Commons Attribution-NonCommercial-ShareAlike license http://creativecommons.org/licenses/by-nc-sa/3.0/ You may reuse this item for non-commercial purposes as long as you provide attribution and offer any derivative works under a similar license.
Here is one more example: The final state is a torn piece of paper with a crayon drawing on it. The mental model would be:

Once again, we have the idea of an active agent, the one who drew the picture. It definitely was not the cat. It was probably a child, based on the character of the drawing. But we can't specify which child. Then an active agent ripped the paper. We can't tell if the ripping agent was the same or different from the drawing agent. The second agent could have been the cat. Or the drawing child. Or a different child. Again, we have the notion of active but unobserved agents, with some knowable attributes and other attributes that can be bounded but not pinpointed.

The mental model for the ripped paper also has a temporal constraint, but it is a different kind of temporal constraint from the bounding of time in the spilled milk case. In the case of the ripped paper, we know that the drawing was made before the paper was ripped, because the rip cuts across the drawing. This line of reasoning is identical to that which geologists use when they infer that a fault post-dates the deposition of strata which it offsets. There are also some more subtle sequencing inferences possible within the drawing: most likely the frame of the house was drawn before the chimney, doors and windows. But there are some temporal details that cannot be inferred from the trace: for example, we cannot infer whether the chimney was drawn before or after the door.

I don't think it is asking too much to expect that preschool aged children should be able to tackle these kinds of problems, either in a research setting or as learning activities. Gopnik and colleagues (Gopnik, 2012; Gopnik, et al. 2004) have shown that students in this age range have the ability to construct abstract, coherent, learned representations of causal relations among events and then use these representations to make causal predictions. I am asking whether students can make retro-dictions as well as pre-dictions.

Some of the thinking in this post grew from an interdisciplinary graduate seminar that I co-taught with Tim Shipley; thanks to Tim and the seminar students. Some thinking grew from discussions around the founding of EDC's new Oceans of Data Institute; thanks to Jess Gropen and Ruth Krumhansl.

What precursor understandings underlie the ability to make meaning from data? -- Discussion

This is a thought provoking piece. The place I know of where children are challenged to formally develop this kind of skill is in logic problems or lateral thinking problems. The kind where you are given the end state and asked to tell what happened.