"Geologists are comfortable with uncertainty"

"Geologists draw conclusions from observational data, analogs, processes, and often from resources that to other scientists might appear to be totally unrelated. ...Geologists are comfortable with uncertainty as that is normal."
I think Dr. Max's point about "geologists are comfortable with uncertainty" is well taken. In fact, this seems to be one of the make or break points in geoscience education for some students. Students who were drawn to science (rather than, let's say, humanities) because there are clearcut answers and you know whether you got the question right or wrong, tend to be very uncomfortable with the level of uncertainty in geosciences. The idea that what we don't know is vastly larger than what we do know about the Earth can be unsettling.

I think it is possible, though, that the level of uncertainty is equally vast in all sciences. But in Earth Science you get to the boundary between the known and the unknown earlier in your education than in other sciences, so it looks like we have more uncertainty. Years ago, I wrote: 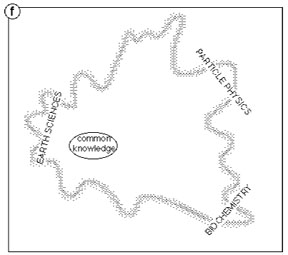 In this diagram, the ameboid shape is supposed to represent all of human knowledge, the territory of "the known." Outside of the ameboid is "the unknown," which is pictured as infinite. Pseudopods of known protrude into the unknown, representing disciplines or topics which have enjoyed recent rapid progress. The fuzzy line represents the boundary between the known and the unknown, the surface on which scientists dance. I made the case that the domain of "common knowledge," which could be viewed as science students' starting point, is closer to the frontier between the known and the unknown in Earth Sciences than in many other sciences.

Fifteen years later, geosciences has learned a lot, especially about how various parts of the Earth System interact. But it is still fairly easy for a freshman, or indeed an elementary school student, to ask a question about the Earth that no geoscientist can answer.

"Geologists are comfortable with uncertainty" --Discussion