The National Science Foundation's Advisory Committee for Environmental Research and Education (AC-ERE) has released new report called "Transitions and Tipping Points in Complex Environmental Systems." Although I found much to agree with in the report, a phrase from the press release rubbed me the wrong way:

Engaging the public is a top priority, the AC-ERE believes. "Without an informed knowledge base, citizens and policymakers are ill-equipped to make responsible decisions about our environmental future. It is time to ask how we can best promote environmental literacy by engaging a cyber-connected society for the benefit of environmental science."

Note that last line: "..... for the benefit of environmental science."

I think this viewpoint is too narrow-minded and self-serving. In these tough times, those of us lucky enough to be employed as scientists and as leaders of science organizations should be asking what science can do for our nation and our planet, not what the rest of society can do for the benefit of science.

Beyond this misstep in the press release, the report has lots of good stuff in it. I especially like that 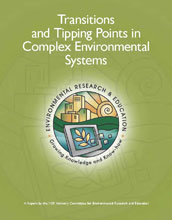 I agree. However, it may be unrealistic to expect that any institution will be anything but self serving. In this case, the 'self' it serves is a worthy one. The question is whether NSF will put its money towards focused work that will benefit the environment. If it really promotes citizen scientists, with real money, then that engagement should raise environmental awareness and not simply promote scientific careers.