You Map It; You Own It 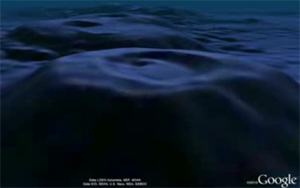 Click here for video.
In honor of World Oceans Day, Google Earth has updated their coverage of seafloor bathymetry, using data from the Global Multi-Resolution Topographic (GMRT) Synthesis. The GMRT folks work upstairs from me and I love beautiful maps, so I went to check out the site. The perky voice of Google's narrator on the highlights video lures the viewer in: "Let's begin by visiting the Lamont seamounts." The screen view plunges dramatically down through the sea surface, and brings us to a line of three seamounts off the coast of Mexico.

To my eye, these weren't just any old three seamounts. I know these seamounts well. Actually, I discovered them.

It was January, 1983. The ink was barely dry on my PhD in marine geology, and I was at sea with two senior scientists, a few students, and a large technical staff, aboard the R/V Thomas Washington. We were surveying a portion of the East Pacific Rise and the Clipperton Transform Fault. This was one of the first cruises with the first multibeam echosounder to be installed on an American academic research vessel. We also had the SeaMARC I towed swath mapping system, a towed camera system for taking seafloor photographs, and the first GPS system ever used for navigation of an academic research vessel. We were like kids in a candy shop, as these new technologies let us see things that no one had ever seen before. The tectonic and volcanic geomorphology seemed as clear as looking out the window of an airplane, in contrast to the blurry approximations afforded by earlier instrumentation.

That particular day, however, we had had endless equipment difficulties. We had launched and recovered our towed instruments way too many times, and had been wrestling with winch and wire all day. By sunset, everyone was exhausted and on edge, and stuff still wasn't working. Research vessels cost a fortune and charge by the 24 hour day, so they are rarely allowed to sit idle at sea. I, as the most junior watch-leader, got the assignment to do something useful with the ship overnight while the expedition leaders and the technical staff got some rest. The co-chief scientists put an X on the big navigation plotter and said "have the ship here at sunrise," and mumbled something about steaming west along a flow line. 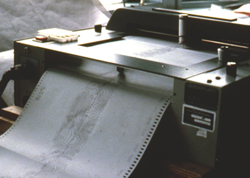 SeaBeam Classic plotter. Photo by Kim Kastens
I plotted a course westward along a seafloor spreading flowline, called the new heading up to the bridge, and settled down for a long, slightly-useful, slighty-interesting night of mapping abyssal hill terrain with the multibeam sonar. The multibeam, a first-generation SeaBeam, produced a swath of bathymetric data about 2/3 as wide as the water was deep. The data were displayed as contours in near-real time on a strip chart recorder and on a huge flatbed plotter. Today's young seagoing scientists can have no idea how miraculous this seemed to us, to see bathymetry unroll in real time, skipping the laborious post-cruise steps of measuring water depth by hand off the paper echo sounder records, plotting depths by hand onto a navigation chart, and contouring by hand on a mylar overlay.

The lab cleared out until I was alone on the sleeping ship, with just one sleepy watchstander and the disembodied intercom voice of the officer on the bridge. We crossed the axis of the East Pacific Rise and headed west. Suddenly, the flatbed plotter and the drum plotter leaped to life and began drawing as fast as their little mechanical hearts could manage, rattling and clattering as though possessed by some bug or demon. I scurried over to see what was wrong, and found that they were in fact drawing contours, very close-spaced contours, and the seafloor was rising faster than I had ever seen.

Gradually, the contours curved around, and the flank, then the summit, then the other flank of a perfect seamount emerged from the plotters. The seafloor flattened and the excitement was over. But then it began again, and a second seamount arose. This one had an extra bonus feature, a summit caldera. I was beside myself with excitement. It was all I could do to keep myself from pulling on the paper in the plotter to make it come out faster. Down we went, down the western side of the second seamount, and then up the side of a third seamount! This one was a composite volcano, with two calderas.

After the third seamount, the seafloor settled down into flattish lumpiness as we continued west along the flowline. I thought about my assignment for the night. I thought about waking up the expedition leaders, and decided that was a really bad idea. Instead, I hijacked the ship, turned right back around, and spent the night surveying back and forth across these three newly discovered seamounts. At sunrise, I had the ship back to the designated X on the map. 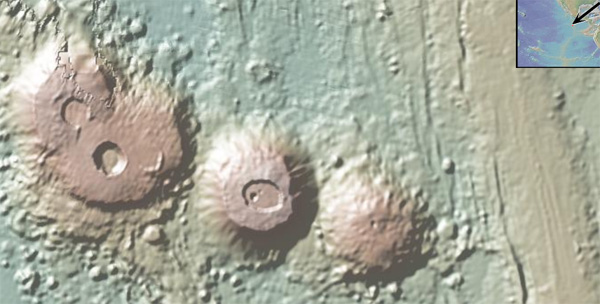 Lamont Seamounts and a portion of the East Pacific Rise (at right). Image by GeoMapApp , data from MGDC, vintage 2011

After that cruise, I did nothing more with those seamounts. I published on the Clipperton Transform Fault data, but other people wrote up the seamount data (Fornari et al, 1987; Barone and Ryan, 1989). I didn't even pick the name, "Lamont Seamounts." I had just that one night alone with my seamounts, before other human eyes got to see them, and before proliferating multibeam sonars had mapped thousands of other lovely seamounts worldwide.

And yet, twenty-eight years later, I still feel a tingle of proprietary ownership of these three seafloor lumps when I see their distinctive morphology.

I am not alone in this feeling. I know of other marine and terrestrial geologists who feel a sense of ownership or special connectedness for patches of the Earth's surface that they have mapped. Why do we feel this way? And why is this feeling so strong and so persistent?

I don't really know, but I have two thoughts. Both arise from our discussion of field-based learning during the Synthesis of Research on Thinking &amp; Learning in the Geosciences:

The first thought has to do with "embodiment." This is the idea that psychological processes, including ideas, thoughts, concepts and categories, are influenced by the body's morphology, sensory systems, and motor systems. Mapping involves choosing a path across the earth's surface, anticipating what one will see along that path, then moving bodily along the chosen path, observing with the senses what is actually there, and reconciling what was anticipated with what is actually seen. All those little discrepant events, when what you see was not what you anticipated--like a giant seamount looming up in your path, for example--are spatially indexed directly into your personal navigation system. Navigation is a very deep and old part of the human cognitive system, reaching way back into our evolutionary heritage as vertebrates. I'm toying with the idea that when discoveries are indexed into this deep-seated navigation system in real time, they get arrayed in mental space and attached to you in a way that is different than when you merely see the same information in a finished representation such as a map.

My other thought has to do with "first inscriptions." Based on observations of scientists in action, Bruno Latour (1987, 1999) described science as progressing through the creation of a "chain of inscriptions," where an "inscription" is a lasting record made by a human or instrument. Science transforms one form of inscription into another form of inscription, and then another and another. As information moves along the chain, moving farther from nature, the inscriptions lose in detail but gain in generalizability, transportability and explanatory power. In this view, the "first inscription" in the chain is unique, because it involves the transformation of a bit of nature into a human-made artifact, whereas all of the other steps in the chain merely transform one artifact into another artifact. In human's system of categorizing objects and phenomena, there is a very deep divide between objects and phenomena made by nature and objects and phenomena made by humans. Perhaps it is the accomplishment of moving a bit of nature across this ontological divide that feels so powerful, akin to alchemy, or transfiguration in the Harry Potter books.

These ideas seem promising, but perhaps insufficient, to account for the sense of connectedness that I and at least some other geoscientists have for places we have mapped.

Do you feel this way about a place you have mapped? Do you know why?

Comment? Start the discussion about You Map It; You Own It