Questions we don't think to ask

The most interesting thing I learned over Thanksgiving arrived during a pre-dinner walk along a rural Massachusetts road heavily impacted by the Halloween storm. Many tree limbs were shattered, fallen to the ground or dangling from their parent trees. My cousin's daughter's friend Mike pointed out that the broken limbs still had their leaves, browned and stiff but still connected, while the healthy trees had lost all their leaves. The rest of us looked more carefully, and sure enough, his observation was correct, tree after tree. 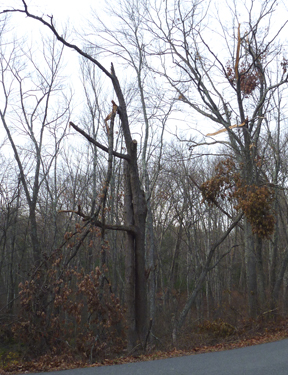 Photo by Kim Kastens, Lincoln MA, Nov. 2011
He told us that this was because trees have a distinct and purposeful process by which they drop their leaves-- it's not just that the leaves get ripped off by the wind or fall by gravity. Later, I looked this up, and sure enough, deciduous plants go through an intricate process of shutting down and sealing off, called abscission. Leaves that can no longer produce energy for the plant through photosynthesis are shed to preserve plant resources. Enzymes degrade the cell walls in a layer of cells, and then adjacent cells swell up, generating shear stresses by pushing and pulling on the adjacent weakened cells. Gravity, wind, rain, or animal motion can then easily break through the remaining little bit of connective tissue, leaving a cleanly-sealed surface on the plant (Coder, 1999).

Now I've been looking at deciduous trees for my entire life, and have dragged many fallen branches, with leaves, off paths and off our driveway. I've been asking questions about Nature intensively for about three decades, and I think of myself as a good question-asker. And yet somehow it never occurred to me to ask why dead limbs hold their leaves while live limbs lose their leaves. It never even occurred to me that this was something that one could even ask a question about. Not only did I not know this interesting fact about trees, but I didn't even know that I didn't know; I didn't know that there was something there that could be known.

Many students and other non-geoscientists seem to have the same reaction to some aspects of Earth Science. For example, why does North America have mountains in the east and west with a flat part in the middle? The fact that this could be asked about, thought about, hypothesized about, is not obvious to most people--they think it just is the way it is; there doesn't have to be a reason. My experience with the dead tree limbs has given me new empathy for their non-questions.

Comment? Start the discussion about Questions we don't think to ask