Multiple lines of reasoning in support of one claim

Kim Kastens
Author Profile
published Nov 22, 2010
One of the attributes of most K-12 classroom science inquiries is that the reasoning that leads from data to interpretation is simple and straightforward. From this experience, students develop the habit of mind of expecting that a data set in science class will lead by a single linear robust chain of reasoning to a claim or "answer," like this:

Earth Science, in my experience, tends not to work this way. Instead, many of the most bold and important claims in Earth Science have been built from many different forms of data and observations. Each data type leads to a chain of reasoning that "suggests" or "supports" or "is compatible with" the claim, like this: 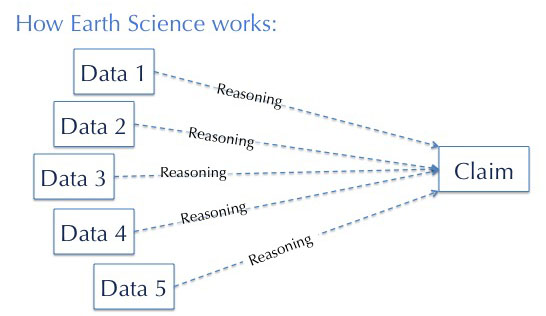 For example, the data supporting the claim for the mass extinction at the Cretaceous/Tertiary boundary includes iridium isotope concentrations, shocked quartz, spherules, tsunami deposits, magnetic and gravity anomaly patterns, the pattern of cenotes (sinkholes) in the Yucatan Peninsula, etc.

Likewise, the data types supporting the claim for anthropogenic climate change include temperature measurements of the oceans and atmosphere, atmospheric carbon dioxide concentration, sea level from tide gauges, sea level from satellites, the dates of first flowering of various plants, pH measurements in the ocean, the thickness of tree rings, etc.

Ault (1998) makes the case that this structure of knowledge--in which independent, converging lines of inquiry have to be integrated and reconciled to produce the warrant for a claim--is a fundamental consequence of the historical and interpretive nature of geology.

Critiques or skeptics can pick off the lines of reasoning one by one. The anthropogenic climate change claim has been particularly vulnerable to such sniping.

Somehow we have to convey to our students and the public that it is the assembled preponderance of the evidence that supports the claim, not any single line of reasoning taken by itself.

Although students may not be used to thinking this way in science class, they are used to thinking this way in life outside the classroom. Decisions of where to go to college, whom to marry, which car to buy, whom to hire, are often made through this same kind of holistic weighing of the evidence. Jury trials and search committees function through this same kind of reasoning, weighing multiple forms of evidence, comparing apples and oranges.

See also Cleland, C. E. (2002). Methodological and epistemic differences between historical science and experimental science. Philosophy of Science, 69, 474-496, for a description of building of the claim of plate tectonics through the accumulation of multiple lines of evidence, and more detail about the K/T example.

Multiple lines of reasoning in support of one claim --Discussion

One more next-morning thought: I showed this diagram last week at a conference on using data that was attended by many math educators. This context got me to thinking that the mathematics that we typically teach undergraduates does not give them any quantitative way to think rigorously about about the aggregate quality of claims that depend on multiple lines of reasoning. The math we give them, correlation coefficients, confidence intervals, etc., gives them ways to evaluate the robustness (the "dashedness" in the diagram) of an individual line of reasoning from data to claim, but no way to integrate the apples and oranges of the different lines of reasoning.

Well said, Kim! I will incorporate these diagrams when discussing NOeS with my preservice teachers and preservice citizens (G101 students). Building the case for plate tectonics followed the same pattern of multiple lines of pretty good, but not incontrovertible, evidence.
~Scott Linneman

« Should we call on non-volunteering students?       Astronomers' Tricks with Light »