What is the West?

What is the West? is a written reflective exercise, with associated readings and discussion, designed to 1) build insight into how personal experiences shape our perception of landscapes, and the American West in particular, 2) enhance knowledge of the geography and ecology of the American West, and 3) illuminate the role of water (or lack of water) in the natural and cultural history of the American West. Through written reflection, selected readings, and discussion, students explore and contextualize their understanding of the West within the larger geography of the continent. The process highlights the ways in which personal experiences, cultural narratives & myths, and ecological knowledge influence perceptions of landscapes. This exercise can be followed by a separate exercise (Migration: An Empathy Exercise) also uploaded on this site.

The general intention of this exercise is to deepen students' understanding of the ecological nature of their own experiences and integrate these experiences within the broader temporal and spatial scales of the American West. An important ecological subtext of the exercise is the role of water, both in terms of the role water plays in the landscapes upon which students reflect, and the role it plays in the ecology, exploration, colonization, development, and cultural identities of the American West. Specific experiences, skills, and capacities to develop through the exercise include:

I have used this exercise towards the beginning of a 300-level interdisciplinary class related to western US water development, to build student connection to the curriculum and the geography on which the curriculum is focused at the beginning of the quarter/semester. It could be adapted for any class related to the ecology, environmental history, water policy, or cultural geography of the American West. For example, the exercise could be used to add a reflective component to an aquatic science-based curriculum, or to build personal connection to the curriculum within an environmental studies or geography class. My students have ranged from first-year to fifth-year students, in small class sizes (<20 students). In larger classes, it could be used as part of a reflective lab or discussion group. The larger class size could be managed either with sufficient teaching assistant support (for commenting on reflections), or by having groups of students swap reflections and provide feedback to each other. The methods of this exercise can be adapted for other regions. The exercise serves as a single assignment. Students do best when they have at least a couple days' notice on the assignment to leave adequate time for reflection. There are no skills or concepts that students need to have mastered in advance.

Part one: Write two pages in journal entry style (full paragraphs with proper grammar but relatively free-form) about your instinctive reaction to the question: What is the West (American West)? As you are thinking about how to answer this question, you might consider the following questions: What images, aspects of landscape, or cultural associations come to mind when you think about the West? What makes the West in your mind? What feelings do you associate with the Western landscape or your idea of the West?

Part three: Write a two-page reflection (short paper style) about whether and how the ideas presented in Freedom and Want affect your thinking about the West. What new ideas or images arise? Did any new ecological factors stand out to you? Was your original description of the West accurate to the West as a whole, or did it most closely represent the part(s) of the West where you live or have lived? Did any contradictions arise between your perception of the West and that presented in Freedom and Want? 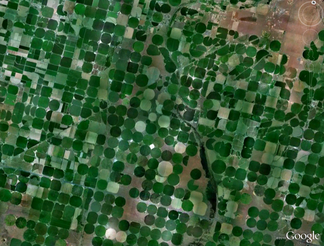 Provenance: Screen capture from Google Earth.
Reuse: This image is intended to serve as an example, not to be reused. 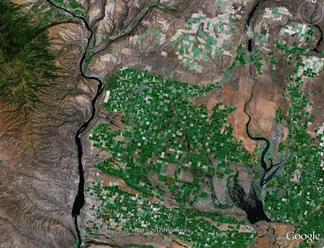 Provenance: Screen capture from Google Earth.
Reuse: This image is intended to serve as an example, not to be reused.

I have only done this exercise with classes in Washington State, and one of the fascinating things that frequently emerges is that most students describe "the West" as soggy rainforest, and are startled by the dual realizations that a) most of the West is arid, and b) they had globalized their experience to an entire half-continent. I would be interested to know how students in other regions respond.

Things to clarify and reinforce are the sequence of the assignment (e.g. first reflection prior to reading so that students first expose their preconceptions) and the slight difference in writing style between the first and second reflection. A more free-flowing form for the first reflection seems to allow ideas, conceptions, and descriptions of place to emerge. In the second reflection, slightly more structure aids in helping students to focus on the questions at hand in the process of structuring their response in a slightly more formal way.

For applying this exercise to large classes (>20), teaching assistants can be recruited to help with evaluation of written reflections, students can swap papers and give each other peer feedback, or the written reflections can be articulated as preparation for class discussions which then serve as the primary form of feedback.


The following resources and readings can follow the assignment to continue to build insight into the complexity of definitions of the West and its ecological context:
This exercise can be followed by a second exercise described on the Curriculum for the Bioregion's page, Migration: An Empathy Exercise. This second exercise follows up on the insights about experience with place, perception, and connection, by looking at what happens when we move, or are forced to move, thereby severing historical connections with particular places.

I have assessed the effectiveness of this activity in meeting the six goals outlined above through a variety of means of verbal feedback, evaluation of written work, informal in-class "tests" that reference the material, and surveys. Goal six (develop written reflective abilities) is the most easily assessed, and for this I track individual improvement in writing skills over the course of the term, based on the quality of this and other written assignments. I assess progress on other areas of development (ability to contextualize experiences, surface assumptions, recognize tendency to universalize experience, recognize role of water, build reflective skills) through a combination of formal and informal methods. Least formal is the evaluation of student responses during the discussion following the exercise. To integrate ecological and geographic knowledge with personal insight, tests, take-home tests, or later reflections can all be useful. For a fun way of testing & reviewing, I have used games of Jeopardy™ (based on the gameshow) in class that focus on the geography, ecology, and environmental history of the American West. Formal assessments could include a test, take-home test, or later reflection. Generally with regard to reflective exercises, I incorporate questions about this assignment into an end-of-course survey (e.g. Did the assignment yield new perspectives on the student's connection to and ideas about the Western landscape? Did the assignment illuminate hidden assumptions about landscape? Did the assignment enhance ecological understanding of the American West, particularly in relation to the role of water?).