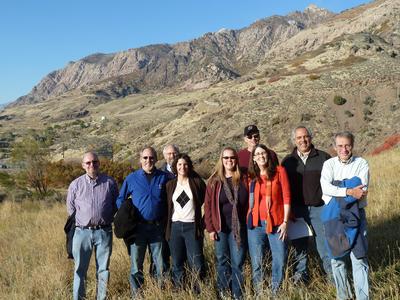 CUR module authors (left to right) Jeff Ryan, Patrick Burkhart, Dave Mogk, Meagen Pollock, Jeanette Pope, Bob Shuster, Pat Manley, David Gonzales, and Ed Hansen. Not pictured: Rob Thomas and Monica Bruckner (staff).
The bulk of this module was written during a writing retreat held on October 27-30, 2011 at Weber State University, Ogden, UT. This event brought together several faculty from across the nation who are actively involved with undergraduate research, including members of the Council on Undergraduate Research (CUR) ( This site may be offline. ) and PIs and staff from On the Cutting Edge.

Undergrad Research resources from across Teach the Earth »

Undergrad Research resources from across Teach the Earth »