submitted by Erin Heffron, IVS 3D
Fledermaus is an interactive 3D data visualization system that is used for a variety of applications including environmental impact assessment, mining, geology, oceanography, and research. iView3D is a free viewer for files in the Fledermaus file format. This program contains the basic viewing capabilities of Fledermaus but is freely downloadable.
Jump down to Audience and Setting : Educational Examples : How to Get this Software : How to Use the Software : Other Examples 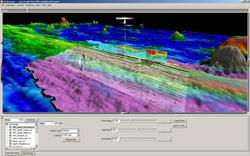 Fledermaus is a 3D visualization and analysis software used for topographic and bathymetric data. This software suite allows you to create and interact with full-resolution terrain and bathymetric surface models, and then integrate those surfaces with a variety of other data types to make a "scene." Users can add images, vertical imagery, ASCII points and lines, Electronic Nautical Charts (ENCs), 3D models, ESRI shapefiles to build a really nice, easy to use visualization of all types of interrelated data. You can also use Fledermaus to run profiles along a surface, do slope calculations, create fly-throughs (flight paths), and more. Users can interact with the data using a standard 3-button mouse or a 3D navigation device (3DConnexion Space Navigator) in normal viewing mode or stereo (split-screen or full stereo). In the near future, Fledermaus will support the integration and display of time-stamped data-so you can show things like earthquakes, sediment migration, and wave propagation over time.

Fledermaus scene of earthquake locations under Japan, displayed in the free viewer iVIew3D. Created at the SIO Visualization Center by David Shelly and Satoshi Ide. Click to enlarge

iView3D is a free viewer for Fledermaus format files, known as SD or SCENE files (.sd or .scene). SD files consist of a single surface-usually a high-resolution detailed piece of topography or bathymetry, possibly with imagery draped over it. Scene files are collections of related SDs and other datasets for an area, saved together into one interactive "scene." Users can download, view, and interact with already-created SDs and scenes that others have posted; flight paths created in Fledermaus can also be played back in iView3D. Fledermaus is used by many people, both academic and commercial, in ocean exploration, mapping, and development related fields, as well as other geospatial/geoscience research and industry. Some users will post Fledermaus files on their sites for download, or will include them in reports; many of these free scenes have the potential to be great supporting tools for education. iView differs from the full Fledermaus software in that you can't create SDs or SCENEs from your own data and you can't do things like profiling and calculations. It is strictly a viewing tool.

Fledermaus is a good tool for educators working at all levels, and for students themselves at upper levels. Educators who would like to show a collection of related geospatial datasets in 3D and be able to do things like profile on the surface, create fly-throughs, etc. would benefit from having the software, though finding data and building scenes of their own can be time consuming. Upper-level students taking GIS classes or other classes with a GIS component, or classes based on data collection methods, etc. would benefit from having the software to use.

iView3D and associated scene files would be good for educational purposes at many levels. For introductory level classes, scenes can be used as part of lectures of all sizes. The viewer can be loaded onto lecture hall computers or a lecturer's laptop; scenes can be open and running in the background, then accessed during the appropriate part of the lecture. In smaller classroom or computer lab settings, students can be allowed to control the mouse or 3D device to enhance their learning.

Examples of Educational use

(Developed at the 2008 workshop on Teaching with New Geoscience Tools)

How to Get the Software

The Fledermaus software can be purchased by contacting IVS 3D sales information staff. It is a commercial software so there is cost involved though there are significant discounts for academic and educational purposes. The software is available for Mac, Linux, and Windows systems (more information about platforms).

To run in full stereo, you need to have a Nvidia Quadro series or 3D Labs Wildcat card. Passive or split-screen stereo will run on any video card that has dual outs, such as the cards mentioned above.

All of that said, Fledermaus can run on pretty much any recent machine, from laptop to full-blown workstation, though a better-then-average video card will likely be required.

iView4D is freely downloadable from the IVS 4D website. It is available for Mac, Linux, and Windows and has passive stereo capability. There is no minimum hardware requirement though a fairly recent video card is recommended; for passive stereo, you will need a card that has dual-outs such as a Nvidia GeForce card (4 and higher).

How to Use this Software

Already-created SDs and SCENE files can be opened in Fledermaus by going to File>Open Data Object (SD) or Open Scene.

Creating your own surface SDs and SCENES does take a little more work. The modules used in official IVS classroom-based training as well as the associated datasets are available on the IVS 4D website, under Support & Downloads>Training & Services>Guides and Resources. The software reference manual and user forum are also available online.

Other folks have posted information and tutorials for Fledermaus on their sites. Those I know of:

Once you have downloaded iView3D and some sample files, launch the software. Go to File>Open SD or Open Scene. SD files have the extension .sd, and are represented by an icon that looks like a blue squiggle on a grey background. Scene files have the extension .scene, and a blue squiggle on a white background. You can also double click on either icon to launch the viewer.

Once files are loaded and visible, you can use your 3-button mouse or 3D navigation device to explore the scene. Navigation devices such as the 3DConnexion Space Navigator provide a short tutorial on their use. To explore using a mouse, follow the directions under Help>Navigating the scene. Some basics to get you started:

Other Examples of use

Scripps Institution of Oceanography Visualization Center
The folks as SIO Viz create really nice Fledermaus scenes and movies and post them on the site for download. The "Library" tab takes you to the area for visualization download, while the "Projects" tab will tell you a little more about some of the projects these visualizations were created for. They also co-sponsor and host Earthquake Education Workshops and use iView 3D as one of their resources. The workshop agenda and resources page are linked on the page above.

Shallow Survey is a conference held every few years which focuses on the collection and analysis of a common bathymetric dataset. Shallow Survey 2008 was held in Portsmouth, NH in October 2008.

USGS Open-File Report 2004-1082 The Gulf of the Farallones: Sidescan-Sonar Imagery

Return to the Tools index page »

See more Tools for Teaching with Data and Simulations »

Data, Simulations, Models resources from across Teach the Earth »

Data, Simulations, Models resources from across Teach the Earth »