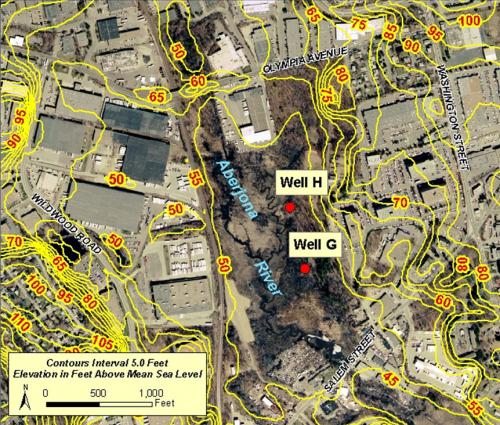 On the morning of December 4, 1985, a set of water-level measurements was made in a network of monitoring wells screened in the glacial materials underlying the Aberjona River valley at Woburn, Massachusetts. These data were collected as part of a U.S. EPA initiative but were made available for use in the trial to reconstruct the pre-1964 and post-1979 steady-state flow conditions in the aquifer, when municipal Wells G and H were not pumping and only the industrial well operated by the Riley Tannery was in use. The potentiometric surface map made from these data became an important piece of evidence during the trial.

Later that day, at noon, Wells G and H were turned on and pumped at their average historic production rates: 700 gpm at Well G and 400 gpm at Well H. These production rates were maintained for 30 days, until January 3, 1986. At that time, water levels throughout most of the aquifer were approaching a new steady-state configuration with respect to the additional pumping stress created by pumping Wells G and H. On January 3, 1986, another set of water-level measurements was taken in the monitoring wells. These water levels were used in the trial to reconstruct typical groundwater flow conditions between 1967 and 1979 when both wells G and H were operating and supplying water to local residences. The December 4 measurements are shown on the "Figure 1" worksheet in the "Water-Level Maps" file, whereas the January 3 measurements are shown on the "Figure 2" worksheet.

The water-level data presented on the two maps represent information at discrete locations in the aquifer. Contouring these data requires interpolation between the points of data to produce a continuous surface known as a potentiometric surface. Using the guidelines given in Chute, N.E. (1959) , construct a potentiometric surface map for both sets of water-level data. Use a 2-foot contour interval. One rule of thumb to remember while contouring the data is that in shallow aquifers, water levels often mimic the land surface topography. So consult the topographic map of the area provided at the beginning of this description to help guide the contouring in areas away from the pumping wells.

Once the contours are drawn, the two maps can be used to infer differences in the groundwater flow conditions and river/aquifer interactions when Wells G and H were not in use and when the wells periodically supplied water to parts of Woburn between 1967 and 1979. The well operated by the Riley Tannery (southwest corner of the map) operated throughout this 13-year period and during the 30-day test in December 1985 and January 1986 at a rate of approximately 200 gpm. Thus, a small cone of depression will exist around this well in both potentiometric surface maps.