Scott Bair, a rookie professor at Ohio State, using water-level data from Woburn in 1988
In the Spring of 1987, a conference was held in Denver by the National Ground Water Association. The topic of the conference was Using Computer Models to Solve Practical Problems and more than 500 professional and academic scientists and engineers attended. At that time, the revolutionary use of digital computers to construct models based on numerical solutions to governing groundwater flow equations was just beginning. Although many groundwater professionals had heard of the Woburn Toxic Trial, very few were aware of any of the details. One of the main attractions at the conference was a special session in which two of the expert hydrogeologists from opposite sides in the Woburn Toxic Trial described the data, analyzes, interpretations, and exhibits they presented at the trial. 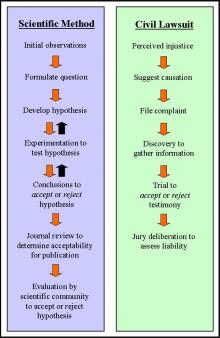 As a new professor at Ohio State, I found it fascinating that these two highly regarded professionals, both with impeccable credentials, reached such disparate opinions about the role of the Aberjona River, the permeabilities of the subsurface materials, and the traveltimes of contaminants to municipal wells G and H when they shared a common set of information and data. I thought these data sets would be a wonderful teaching tool for students in my classes at Ohio State to explore and use. One lesson I convey to students is that data are merely data. They are critically important. They can be expensive and arduous to collect. And they must be analyzed, interpreted, and evaluated, for without those latter steps, data are merely data.

This website contains much more information and many more general resources to explore why experts reach different opinions even though they share common data (Bauvelt, 1999; Lahm, 1987; Springer, 1992; Cunningham, 1995]) and many more specific resources about the disparity of expert opinions in the Woburn Toxic Trial. Learn more by reviewing Bair, 2001 (Acrobat (PDF) 4MB Jun18 09), resources collections, and learning modules.