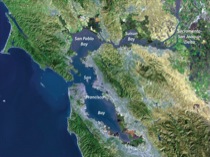 Hide
Figure 1: This picture is a satellite image, taken from space, of the San Francisco Bay (Bay) and Sacramento-San Joaquin Delta. The colors in this image all represent different land cover and land uses. Open water is shown in blue. Many of the dark green areas adjacent to the Bay waters are either natural or man-made wetlands that are fully or partially flooded by the tides on a regular basis. The orange and light yellow colored areas in the South Bay and North Bay are salt ponds, separated from the Bay by levees and formerly used for salt production. The grey areas are residential, urban, and commercial development. Details

Hide
Figure 2: This map depicts a wetland area in the San Francisco Bay (Bay) prior to European settlement and widespread development of the Bay shoreline. The dense tidal channels provide rich habitat for native birds, fish, and other species by creating refuge and promoting nutrient and sediment exchange from the Bay. Details 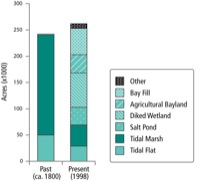 Hide
Figure 3: This graph shows the amount of tidal marsh and tidal flat (collectively tidal wetlands) before and after European settlement and development of the San Francisco Bay shoreline. Salt ponds, diked wetlands, and agricultural baylands are areas separated from the Bay by levees and used for human use, such as salt production, duck hunting and outdoor recreation, and farming practices. Bay Fill refers to material, such as sediment and debris, used to fill in wetland areas for development or other uses. These areas can be seen in the satellite image in Figure 1. Details

Hide
Figure 4: This diagram helps conceptualize the geomorphic processes that occur when tidal marshes respond to sea level rise in the San Francisco Bay (Bay). At the margin of the open waters of the Bay, sediment is eroded and suspended in the water column during periods of high wave activity. This suspended sediment is carried onto the surface of tidal marshes during high tide or high waters of a storm. It is deposited on the marsh surface either as plants trap the sediment or the waters become calmer or both. Gradually this sediment deposition builds up the surface of the marsh, called accretion or accumulation, and as sea level rises, the landward edge of the marsh moves upward and landward. Details

The San Francisco Bay (Bay) is part of the largest estuary on the west coast of North America. It supports a densely populated and prosperous surrounding cultural landscape (Figure 1). In combination with the contiguous Sacramento-San Joaquin Delta, the estuary historically covered over 800,000 acres (3,000 km²) supporting diverse natural habitats including open waters, tidal flats, and freshwater, brackish, and saline tidal wetlands (Goals Project 1999). One of the most unique aspects of the San Francisco Bay area population is that, after a period of widespread development eliminated over 80% of the tidal wetlands from the 1850s to the late 1960s, the region made political and financial investments to conserve and, more recently, restore the Bay ecosystem. Projected rates of sea level rise over the next century now require a new management strategy to preserve that community investment, as well as to protect the huge financial investment in infrastructure and urban development (Parris and Lacko 2009).

The Changing Morphology and Management of the San Francisco Bay

Geomorphologic and other scientific studies of the San Francisco Bay chronicle a history of rising seas that have shaped and re-shaped the Bay bottom and shoreline. Sediment cores tell us that the Bay formed during a period of rapid sea level rise, spurred by warming temperatures and melting glaciers, starting about 10,000 years ago and lasting about 6,000 years (Atwater et al. 1979, Byrne et al 2001, Malamud-Roam et al 2007, Watson 2004). Geomorphic analysis of historical evidence from the late 1800s (navigation charts, topographic surveys, maps from Spanish settlers, etc) and sediment coring studies demonstrate how the continual motion of the tides gradually shaped the Bay shoreline into a vast network of biologically diverse, densely-vegetated tidal marshes along the Bay shoreline (Figure 2). US Coast Survey navigation charts also provide the necessary data for bathymetric analysis of the underwater (subtidal) areas of the Bay, a revealing aspect of the morphologic history of the Bay (Jaffe and Foxgrover 2006, Jaffe et al 2007).

As the Bay shoreline was being developed, surface mining in the Sacramento-San Joaquin watershed eroded vast amounts of fine sediment from the Sierran hillslopes which was then transported by the rivers and deposited in the Bay (McKee et al 2006, Jaffe et al 2007, Schoelhammer et al 2007). From the 1850s to the 1890s, more than 250,000,000 cubic yards (~191,138,715 cubic meters) of sediment was deposited in the Bay primarily from the Sacramento-San Joaquin watershed, enough to fill 60 Superdomes (Jaffe et al 2007, SFEI 2009). Some of this sediment was used by developers to "fill" tidal wetlands and shallow water areas of the Bay in preparation for building; additional sediment was dredged to deepen Bay channels for shipping and navigation. Comparison of the historic records and present day aerial photographs reveal that this unregulated development of the Bay and its shoreline eliminated 80% of the tidal marshes on the Bay shoreline (Figure 3) (Goals Project 1999). Since then, former and remaining wetlands have been utilized for development and managed for a variety of uses, including salt production, flood control, utility corridors, recreation, and, to an increasing extent, conservation.

In the late 1960s, groundbreaking policy (the MacAteer-Petris Act) was passed in the California Legislature prohibiting un-permitted development by regulating the use of "fill" and securing the public right to access the Bay. This legislation formed the San Francisco Bay Conservation and Development Commission (BCDC) as a management agency that presently regulates and enforces Bay fill. With controls on development and community support for the environment, over $100 million dollars has been invested in restoring tidal marshes on the Bay shoreline. This investment includes the largest tidal marsh restoration project on the west coast (~16,500 acres or 67 km2), which is currently in progress in the South San Francisco Bay, and significant projects in San Pablo Bay. The Bay still retains critical wetlands for endangered species and other wildlife, and large areas could be restored elsewhere in the Bay. However, the fate of existing and future restoration efforts depends on the development of new policy and management paradigms to address projected increases in sea level rise (Parris and Lacko 2009).

Based on 30 years of restoration experience in the Bay, geomorphologists have demonstrated that, aside from available land, a major component of a successful restoration is the availability of a plentiful supply of fine sediment (Orr et al 2003, PWA and Faber 2004).

Tidal marshes are able to adapt to sea-level rise by accretion and migration (collectively referred to as "retreat" or "transgression") (Figure 4). Accretion in tidal marshes is a combination of organic accumulation from decaying marsh plants and inorganic sediment deposition. Inorganic deposition occurs when waves erode sediment from tidal flats and low elevation tidal marshes and tides deposit that sediment onto the higher marsh or land newly restored to tidal action. As sea level rises, the tides reach further landward and inundate previously upland areas. In this fashion, tidal marshes migrate upward and landward as sea level rises.

A combination of faster sea level rise, limited open space for restoration, less sediment coming into the Bay, and less sediment existing within the Bay could reduce the ability of marshes to accrete and migrate, causing erosion of tidal marshes and making future restoration more difficult (Callaway et al 2007, Orr et al 2003, Parris and Lacko 2009). In comparison to the historic periods, more sediment is now trapped behind water supply and flood control dams; dams also reduce flood flows, limiting the transport of the available sediment pool from the watershed to the Bay (McKee et al 2006, Jaffe et al 2007, Schoelhammer et al 2007). The Sacramento-San Joaquin watershed, once thought to be a source of approximately 90% of the sediment entering the bay, is now estimated to contribute only 60% of sediment inflow (McKee et al 2006). Local tributary watersheds, such as the Napa and Sonoma rivers and Alameda Creek, contribute the remaining 40%, but are not yet actively managed to direct valuable sediment supplies to desirable shoreline sites. The area of tidal flats in the Bay, an important source of sediment for the marshes, has been reduced by more than 60,000 acres (Jaffe and Foxgrover 2006, Jaffe et al 2007, SFEI 2009).

If the rate of human-induced carbon dioxide emissions equals the past forty years, the United States Geological Survey (USGS) projects a rise in sea level of 46 centimeters (18 inches) by mid-century (2040-2060) and 140 centimeters (55 inches) by the end of the century (2090-2110) (Cayan et al 2008, Knowles and Cayan 2002, Knowles 2008). This amount of sea level rise would more than double the historic rate of sea level rise from approximately 0.1 inches per year to 0.3 inches per year, increasing the risk of erosion in the Bay and on the Bay shoreline.

Erosion will lead to loss of tidal marshes and tidal flats, and it will also undermine the many protection structures (seawalls, rip-rap revetments, levees, etc) that separate residential and urban developments from flooding. In most cases, protection structures accelerate erosion (Griggs 2005). Seawalls and levees reflect wave energy back onto the adjacent shoreline. Construction and maintenance of these structures often requires the use of sediment, diminishing the sediment pool available for tidal restoration. Using these structures, the cost of protecting development alone against a 55-inch rise in sea level is estimated to be about $14 billion (Heberger et al 2008).

Widespread and continued erosion in the Bay and along the Bay shoreline could have devastating consequences for state of California and the southwestern United States. The Bay area is a center for innovation because it houses some of the world's leading universities, research institutions, and high-tech industries. Preserving and restoring tidal marshes and tidal flats may provide sustainable alternatives to structural protection, providing a natural buffer for valuable shoreline development. At the same time the impacts from existing and new structural protection will have to be offset by balancing ecosystem and development uses on the shoreline. The Bay ecosystem is a valuable nexus for preserving biodiversity, as a critical component of the Pacific Flyway, a nursery for native fisheries, and essential habitat for many species of special concern. This equitable management of the Bay requires new policies and management strategies for agencies like BCDC to honor the investment made by the Bay area community in the late 1960s for future generations to come.