The Mexican Alps: A Zone of Glacier Carved Cirques and Valleys 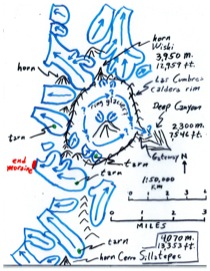 BACKGROUND The Mexican Alps is a zone of spectacular landforms similar to those found in the glaciated regions of the Rocky Mountains. It is located just north of Mexico's highest mountain, Pico de Orizaba, about half-way between Mexico City and the Gulf of Mexico. Pico de Orizaba is a strato-volcano similar to Mt. Rainier, while the peaks in the Mexican Alps were once part of a strato-volcano that was blasted away about 17,000 years ago (Hoskuldsson, 1992). The eruption left a caldera nearly identical to Crater Lake in Oregon, but without the water. Both calderas have crater rims about eight kilometers in diameter. Elevations are comparable to many peaks in the Grand Tetons. These were not the southernmost glaciers in North America, as glacial features cluster around a 3,820 meter peak in Costa Rica (Weyl,1956; Lachniet, 2004). Glaciers in Mexico advanced around 195,000, 15,400, 13,100, 9,500, 2,750, and less than 1,265 years ago (Vazquez-Selem and Heine, 2004). These dates are for other mountains, as the glacial features of the Mexican Alps remain undated.

PRESENT GLACIERS Although no glaciers presently exist in the Mexican Alps, the largest glacier in Mexico, the Great Northern Glacier, is located just to the south. It has a length of about 2.5 kilometers. (Lorenzo, 1964; Crausaz, 1993; Brown, 2005)

DISCOVERY These glacial features were first noted on oblique air photos made as stereo pairs. They are also obvious on vertical stereo air photos and the 1:50,000 topographic maps. Lauer (1983) illustrated former glaciers and snow fields extending some ten miles north to south and five miles east to west of the summit cone of Pico de Orizaba (5,635 meters above sea level). His map shows several valley glaciers protruding another five miles to the east and west. This would make the former snow and glacier fields on Pico de Orizaba even more extensive than those on Mont Blanc at present. Lauer did not map any glaciers at the location covered in this vignette. Most of the glacial features are on the western slopes of the range.

MYSTERIOUS RING OF NOTHINGNESS Hoskuldsson (1992) found volcanic deposits inside the caldera, and about five miles west of the rim, but none immediately west of the rim. The ash flow deposits thinned out toward the west, and he was able to map them as far away as twenty miles. So why was there nothing from the caldera rim outward for five miles west? He speculates that at the time of the eruption, the volcano was as high as Pico de Orizaba. It was in the middle of an Ice Age. Volcanic ash fell on the glaciers and snowfields around the base of the mountain. When the ice and snow melted the ash that fell near the base of the mountain was carried away with the running water. His most recent date for the eruption is 16,100 years ago. Vazques-Selem and Heine (2004) think the oldest date for a glacial advance around that time would be 16,000 years ago. Geologically, the dates are close.

Several cirques have tarns, although they only have water in them during the rainy season. One tarn is 120 meters across. Many of the original tarns have filled in with vegetation and sediment, and are now meadows and swamps. In the entire range, we encountered only three shepherds, who were grazing their sheep in a meadow.

While there do not appear to be any paternoster lakes, there are several locations where meadows, with with steep rises between them, form the stepped topography typical of glaciated valleys.

Not all of the glaciers appear to have left end moraines, or if they did, subsequent erosion has removed enough material to make the identification of these landforms difficult in the field and on air photos. In the southwestern part of the range a few end moraines are clearly visible crossing the lower reaches of the glaciated valleys. They were identified on the vertical stereo air photos. All have been breached along the northern side by streams.

Lateral moraines parallel some of the deeper valleys. When followed up the valley they terminate at the equilibrium-line altitude (ELA) which was once the lower edge of the former zone of accumulation. Some of these lateral moraines appear as distinct ridges several meters high along the sides of the glaciated valleys.

Generally streams are continuous from the head to the mouth. Glaciated alpine valleys, however, often have small branch glaciers joining at a high level. Once the ice is gone, a stream in a small branch cirque will flow across a relatively flat meadow or out of a tarn, and then plunge over a steep slope to the bottom of the main glaciated valley. There are a number of these well-formed hanging valleys in this region.

The Mexican Alps may have had a ring glacier. A racetrack circles the central dome of the caldera. It is outside of the central dome and inside the inner walls of the caldera. Clearly there was some ice inside the caldera, since there are a number of small cirques on the inner walls of the caldera rim, and several small cirques on the northern side of the central dome. The drainage divide of the racetrack is northwest of the dome. One stream branch flows north, then east, then south, where it joins a branch that also starts at the divide, and flows south, then east, and finally northeast. After the two streams join, a single stream then pass through a gateway, or breach in the rim of the caldera. The stream has carved a canyon with steep walls over a thousand meters high to the east as it drops down toward the Gulf of Mexico. If the ice in the racetrack had been continuous, and thick enough to flow as a glacier, then it would have formed a donut shaped glacier which squeezed out of the gateway. However, the racetrack may have formed a ring lake which eventually breached the eastern walls of the caldera rim by flowing over the crest after the caldera filled with water. At present, the gateway is V-shaped, so it appears to have been cut, or at least modified, by stream action.