Hide
Figure 2: Photograph of an alluvial fan in Bristol, Vermont. Inset photograph is a view inside of the backhoe trench, which is used to map sediments that were deposited in the alluvial fan during storm events. Arrow points to the location of the trench in the fan surface. Details 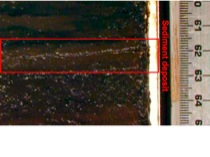 Hide
Figure 3: A small section of a sediment core taken from South Pond in Stark, NH. The sandy, light colored layer contains coarser sediment than the surrounding darker organic muds, In addition to visual analysis, these layers are distinguished by performing laboratory tests to measure sediment size and organic content. During storms, small wood fragments (i.e. twigs) wash into the lake along with the coarse sediment. These fragments are used for radiocarbon dating to calculate the age of the deposit. Details 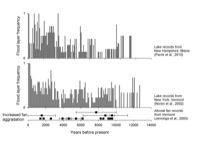 Climate is the long-term average of variables in the Earth's atmosphere, such as temperature, precipitation, and wind. For millions of years, climatic events, such as rainstorms, have shaped the earth's surface leaving sediment deposits that can be studied to understand climate. By compiling pre-historic, sedimentary records, researchers can define natural climate patterns as well as variations that could have detrimental effects to society (i.e. climate change).

Understanding the natural variability in precipitation, for example, is necessary for distinguishing and projecting changes that may accompany climate change. Decreases in the frequency and magnitude of rainstorms could cause drought that destroys crops and threatens drinking water supply. Conversely, an increase in the frequency or magnitude of rainfall could cause floods that damage development, stress critical infrastructure such as roads and storm drains, and more importantly endanger lives. Thus, deciphering geomorphic records of precipitation and damaging floods preserved in natural archives enables society to understand and plan for floods of the future.

In the heavily populated northeastern United States, big rainstorms are known to have caused floods that significantly changed the landscape and damaged developed areas. Sedimentary records of these events are preserved in lakes and along valley floors through New York, Vermont, New Hampshire, and Maine (Figure 1). For this reason, New England is an apt setting for undertaking geomorphic research on climate variability.

What is the evidence of storms?

The upper reaches of watersheds in New England commonly consist of steep hillslopes with loose sediment including fine silts and sands as well as coarse gravel, cobbles, and boulders. During storms, rainfall collects in narrow depressions on the hillslope (gullies) and accelerates as it moves downhill, initiating erosion of the sediment on the hillside. At the base of the hillslope, water dissipates across the valley floor, depositing sediment as the water decelerates. In these instances, the sediment forms a recognizable, cone-shaped deposit, called an alluvial fan. Backhoes can be used to dig trenches across alluvial fans, where geomorphologists distinguish storm deposits containing coarse sediment poorly mixed with silt, sand, and other debris (Figure 2).

In other locations, rainfall collects in streams that flood during storms, eroding the stream channel. Across New England, many streams flow directly into lakes, forming deltas where coarse sediment settles in the lake and on the lake margin. The coarse sediment forms characteristic layers that contrast sharply with the fine-grained organic muds that slowly accumulate in lakes over time (Figure 3). These unique layered deposits can be studied by collecting sediment core samples from suitable lakes and analyzing the sediment in the cores using lab tests that identify key characteristics such as grain size (texture), organic content, and color. Hundreds of these flood-deposited layers have been documented in alluvial fan trenches and in sediment cores collected from lakes in New York, Vermont, New Hampshire, and Maine.

After the positions of flood layers have been documented, radiocarbon dating methods are used to determine their ages. In a single sediment core sample or fan trench, numerous pieces of organic material are collected and dated: small pieces of charcoal and plant seeds, leaves, and stems are the most common materials that are dated in these deposits. The exact timing of these events, derived from the radiocarbon dates, is important primarily because it allows the record of storms revealed in a single lake or fan to be compared with those of other sites.

Where these records are synchronized, it increases our scientific confidence that the storms were related to regional climate patterns as opposed to conditions specific to a single locality. For example, a local convective thunderstorm could initiate flooding in one lake watershed and leave neighboring watersheds dry. However, large storms, such as hurricanes and extra-tropical cyclones ("nor'easters"), would cause flooding across New England resulting in lake deposits and alluvial fans with the same or similar ages (Figure 4).

What does the evidence say?

Patterns of past storminess have been identified from the geomorphic records of both New England lakes and alluvial fans (Figure 4). These records indicate that over the past 12,000 years, when landscape looked similar to today, storm activity increased and decreased in the New England region several times (Figure 4).

The record of storms from New York and Vermont lakes and alluvial fans reveal a consistent 3,000-year pattern where storms increase. The regional patterns revealed by both the sedimentary evidence and historical meteorological observations suggest long-term changes in the preferred state of the Arctic Oscillation as the likely synoptic-scale climate driver. However, this pattern is not evident in the record from New Hampshire and Maine. The discrepancy may reflect regionally distinct climatic processes, or a contrasting methodology used to analyze the cores from these two regions.

Both sets of lake records show an increase in the frequency of storms over the past 4,000 years, as well as a distinct period of increased storminess around 6,000 years ago. Because there is agreement between the records throughout New England over the more recent period, a regional climate pattern of increased storminess may be emerging. The lake records also suggest that storminess is continuing to increase towards the present day. Regional patterns of climate, such as those caused by the El Niño/Southern Oscillation, have significant impacts on people's lives in other localities. Further geomorphic research is necessary to ensure accurate comparison between the lake and alluvial fan records and to distinguish natural patterns of storms in the New England region.

« Sea Level Rise in the San Francisco Bay – Considering Morphology in Adapting Management       What's in a fan?: A closer look at the stratigraphy of five Vermont Alluvial Fans »