Slow erosion without creep in the McMurdo Dry Valleys, Antarctica 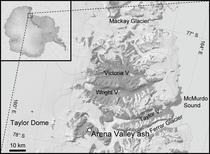 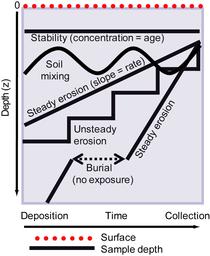 Hide
Figure 3. A cartoon diagram of how an exposure model represents the change in depth through time for a sample collected for cosmogenic nuclide analysis. The black lines represent different paths that a sample in an unconsolidated deposit could have traveled relative to the surface. Because the production rate of cosmogenic nuclides depends on the depth of a sample, we can integrate these depth through time curves to make unique predictions about the concentration of cosmogenic nuclides in the samples that we measure. In this manner, we can determine the stability, erosion rate, and potential for mixing and burial at the sample site. Details 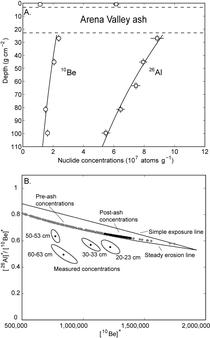 Hide
Figure 4. Measured 10Be (circles) and 26Al (squares) concentrations (atoms g-1quartz) at the Arena Valley ash site. The small vertical and horizontal lines indicate the range of depth of the sediment sampled and the error in the nuclide measurement, respectively. In some cases, these values are smaller than the markers used to indicate each datum. The white box shows the approximate location of the Arena Valley ash in the soil column. The solid lines show the predicted nuclide concentrations for the best-fit model results where the erosion rate after the emplacement of the ash was ~0.2 m Ma-1. 4.B) A Klein-Nishiizumi-two-isotope diagram, which plots the 26Al/10Be ratio against the 10Be concentration. Nuclide concentrations for each sample have been divided by the production rate of the nuclides at each sample depth. For each sample that we have concentrations of both 10Be and 26Al, the measurements are shown as black circles with ellipses around them representing the 68% confidence interval. The general interpretation of this diagram is that cosmogenic nuclide concentrations that reflect only surface exposure plot on the upper line, concentrations that reflect erosion plot on the lower line, and concentrations that reflect a more complicated exposure history, such as burial or inheritance, plot below these lines. A more detailed explanation of this diagram can be found in Lal (1991). The grey boxes and black circles show the results of using an exposure model to consider the nuclide concentrations as the sum of their pre- and post-ash components, respectively. Both pre-and post-ash components plot directly on the steady erosion line, indicating that the measured nuclide concentrations can be explained by erosion alone and do not indicate that the sample site has been buried. Details

Quantifying erosion rates is central to understanding how landscapes evolve through time and for discerning the links between landforms and the processes that shape them. The alpine valleys of the McMurdo Dry Valleys in Antarctica (MDV - Figure 1) have a unique hyperarid, cold, polar desert climate. The MDV are incredibly dry, receiving less than ~10 cm of water equivalent in precipitation each year, and extremely cold, with mean annual temperatures of ~-22°C. Because it is so cold and dry, running melt water is rarely observed, and bacteria and nematodes (a worm from the phylum Nematoda) are typically the highest life forms found in the MDV. Under these conditions, erosion rates are thought to be among the lowest in the world. The preservation of ash deposits of up to 15 Myrs old at the present-day surface has been interpreted as indicating that these cold and dry climate conditions have persisted for millions of years in the MDV, implying that erosion rates have remained low for millions of years too (e.g. Denton et al., 1993). Landscapes such as the MDV make geomorphologists wonder: How low can erosion rates be? Is it possible to have zero erosion across a landscape? What are the geomorphic processes operating in a landscape with very low erosion rates? How do processes and rates in the MDV compare to planetary bodies such as the Moon and Mars? In this vignette, we will briefly describe the method of quantifying erosion rates with cosmogenic nuclides, and discuss an example from the MDV to address these questions.

Cosmogenic nuclides, such as 10Be and 26Al, accumulate in quartz in rocks and soil that are exposed to cosmic rays, which is generally the upper few meters of the surface. Because these nuclides accumulate only due to exposure to cosmic rays, we can use their concentration to address questions regarding the age and rate of processes like erosion on any geologic surface (e.g. Lal, 1991; Gosse and Phillips, 2001). We collected samples of surficial deposits in the MDV by digging a soil pit and taking bulk sediment samples of soil at various depths down to ~1 m. One of our sample sites includes an ash layer that is 4.34 Myrs old (Marchant et al., 1993) (Figure 2--The Arena Valley ash site). We collected samples from above and below this ash layer and measured the concentration of cosmogenic 10Be and 26Al in the quartz from these sediments.

The measured concentrations of 10Be and 26Al at the Arena Valley ash site fit a simple exponential curve and indicate that the site has been experiencing erosion at a rate of ~0.2 m Myrs-1 for the past ~4 Myrs (Figure 4). Additionally, the concentrations of 10Be and 26Al indicate that this site has not been shielded from cosmic rays, which indicates that glaciers have not expanded to cover this site, or experienced any vertical mixing due to cryoturbation or soil creep in the past ~4 Myrs. Various other surface deposits in the MDV have been sampled for similar cosmogenic nuclide analysis, and each have found that slow, steady erosion (0.2-4 m Myrs-1) without creep has been going on in the MDV for the past ~1-4 Myrs (e.g. Putkonen et al., 2008; Schiller et al., 2009).

The slow, downslope movement of rocks, minerals, and soil due to gravity, regardless of the method or process responsible for the movement of the material, is called soil creep. Creep has the ability to move material downslope at rates on the order of cm yr-1, and it is the dominant process responsible for transporting much of the soil from the landscape to river channels (Oehm and Hallet, 2005). Soil creep is thought to be a nearly universal process that occurs in all but the most hyperarid climates. Because all of the sites studied in this project (Morgan et al., 2010) have cosmogenic nuclide concentration profiles that are well-explained by an exposure model that predicts an exponential curve, vertical mixing of the regolith is not indicated as an active geomorphic process in the timeframe that the nuclide concentrations record (~1-4 Myrs for all sample sites). If vertical mixing was active during this time period, the nuclide concentration profiles would be expected to be well-mixed and would not fit an exponential profile. Thus, even though the surface is eroding and we observe wind-blown sediment fluxes (Lancaster, 2002), any downhill transport of material (e.g. Putkonen et al., 2007) must be limited to the upper few centimeters because creep is not indicated by the samples that lie just below the surface. Because soil creep rates affect the rates of landscape evolution (Oehm and Hallet, 2005), the lack of creep at the sample sites may contribute to the low erosion rates determined in this study.

The erosion rates of unconsolidated deposits in the MDV (0.2-4 m Myrs-1) are so low that they are comparable to the lowest bedrock erosion rates ever reported, which also come from other arid regions (e.g. Belton et al., 2004; Dunai et al., 2005). The lack of creep and vertical mixing in these deposits is likely related to the lack of moisture in the regolith that could induce frost heave, and because the MDV lack higher lifeforms that would cause bioturbation. The lack of creep suggests that slopes should retreat in parallel, which may help to preserve the fresh appearance of surface deposits in the MDV for millions of years. Because unconsolidated deposits in the MDV can be viewed as an end-member in the spectrum of both soil moisture content and biotic activity, we can consider these erosion rates to be similar to what is experienced on the surface of Mars and the Moon today, and that the preservation of surface landforms on these planetary bodies may result from a lack of soil creep that would act to degrade these features.

« Complexity of suspended sediment transport in an agricultural drainage system in Imperial Valley, southern California       The degradation of glacial deposits in the McMurdo Dry Valleys, Antarctica »