The degradation of glacial deposits in the McMurdo Dry Valleys, Antarctica 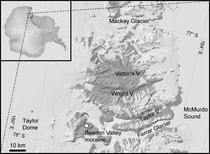 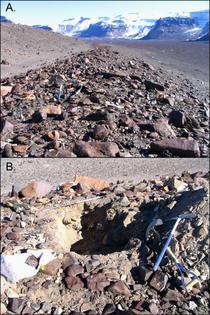 Hide
Figure 2. Photos of the Beacon Valley moraine sample site. A) The sample site is shown by the pick and shovel, which lie at the crest of the moraine. B) The hand-dug sample pit. Details

Hide
Figure 3. The depth vs. time plot for the sublimation exposure model in a reference frame that is fixed to the surface. The solid lines denote the mass that shields each sample through time. Initially, the samples are deposited in debris-rich ice, so they are shielded by both the overlying debris and ice. After this unit is deposited, it degrades due to both sublimation of the ice and erosion of the resulting till, and the samples approach the surface at a rate equal to the sum of these processes. Samples remain in the ice until the ice front has passed below the sample, at which point the sample accretes into the till. Once a sample has accreted into the till, the only process that affects the shielding of the sample is erosion, and the samples will approach the surface at a rate equal to erosion alone. Details 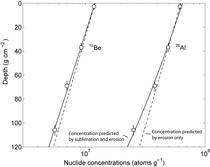 Surface deposits such as glacial moraines and tills can yield significant information about the timing, extent, and rate of environmental change on Earth. In order to correctly interpret the record of past environments recorded by these deposits, we need to understand how geomorphic processes may have altered these deposits. Exposure dating with cosmogenic nuclides is a method for understanding the processes and rates at which glacial deposits change through time so that we can correctly interpret the paleoclimate information that they contain. One such place that the application of cosmogenic-nuclide exposure dating has greatly increased our knowledge of environmental change is Antarctica.

The McMurdo Dry Valleys, Antarctica (MDV) contain a number of well mapped glacial deposits that record various episodes of glaciation over millions of years (e.g. Calkin, 1964). Of particular interest to geomorphologists is the observation that glacial deposits in the MDV present two apparent contradictions regarding the degradation of unconsolidated deposits. Many glacial deposits are millions of years old, yet they have maintained their meter-scale morphology and appear fresh on the landscape despite the fact that bedrock and regolith erosion rates in the MDV have been measured at 0.1-4.0 m Ma-1 (e.g. Summerfield et al., 1999; Putkonen et al., 2008). Additionally, relict glacial ice persists under a thin veneer of Miocene-aged soils even though modeled and measured sublimation rates of ice in Antarctic soils suggest that without any recharge mechanisms this ice should sublimate at a rate that would leave the upper few meters of soil completely dry on the order of 103-105 years (e.g. Sugden et al., 1995; Hindmarsh et al., 1998).

To correctly interpret the record of glaciation in the MDV indicated by these deposits, we need to understand what geomorphic processes have acted upon them since they were deposited, which means we need to directly address these apparent contradictions between perceived stability and measured and modeled rates of geomorphic activity. In the Beacon Valley (Figure 1), we used cosmogenic nuclides 10Be and 26Al, which accumulate in quartz in rocks and soil that lie in the upper few meters of the surface, to address questions regarding the exposure history of glacial deposits in the MDV (e.g. Lal, 1991; Gosse and Phillips, 2001). Sampling of glacial deposits in the MDV involves digging a soil pit and taking bulk sediment samples of soil at various depths down to ~1 m (Figure 2--the Beacon Valley moraine site). Analysis of the concentration of cosmogenic nuclides 10Be and 26Al involves building an exposure model to explore how these samples have changed depth with time, which will strongly affect the measured concentration of 10Be and 26Al in the samples (Figure 3). Exposure models predict cosmogenic nuclide concentrations at depth in the soil column, and we can test how well these predictions match the measured concentrations to determine which geomorphic processes are active and the rate at which they operate (Figure 4).

The general concept for analyzing the cosmogenic nuclide measurements is to use the local geologic and geomorphic context to determine what happened geologically. Then we construct an exposure model to describe these geologic events and use the 10Be and 26Al concentrations to determine when and how fast the geologic events occurred. For example, consider a crest of a glacial moraine in Beacon Valley that was deposited when the Taylor Glacier was larger and expanded into this valley (Figures 2, 3, 4). After deposition, it appears that the till underwent erosion because the current moraine surface is capped by a desert pavement that formed as a lag as the finer sediments were eroded away. Though ground ice was not found at this site, we must consider the possibility that this till contained either massive ice or ground ice that has subsequently sublimed away because many moraines in the MDV are initially deposited with ice cores. Sublimation, the process by which solid ice transforms directly to vapor without becoming liquid, is the likely mechanism that would cause the loss of ice in the soil because the climate of the MDV is so cold and dry, and because the surface of the moraine lacks liquid water-related features such as rills and gullies that would indicate that ground ice had melted and flowed away. Figure 3 shows a conceptual model and an exposure model that combines the effects of ice sublimation and erosion of till. Though Figure 3 shows these models in a cartoon fashion, exposure models describe how the depth of a sample has changed through time with mathematical equations (see Morgan et al., 2011 for a detailed explanation).

Results from fitting the exposure models to the measured nuclide concentrations for the Beacon Valley moraine indicate that the data cannot be adequately explained by erosion alone, and that the sublimation exposure model can capture all of the data (Figure 4). The model parameters for the best-fit sublimation exposure model are: 12 m Myr-1 for the sublimation rate, 0.78 m Myr-1 for the erosion rate and 7.7% for the initial debris concentration. The age of the moraine cannot be uniquely determined because the nuclide concentrations reach an equilibrium between production, decay, and the degradation rates in ~0.4 Ma. However, what is consistent is that the lowest sample at this site emerged from the ice 0.13 Myrs ago. Overturning of the till by cryoturbation ("frost churning", the mixing of soils due to changes in temperature at or below freezing), vertical mixing, or soil creep is not indicated by the cosmogenic nuclide profile, and degradation appears to be limited to within a few centimeters of the surface.

These results help resolve the apparent contradiction between stability and activity observed in the MDV. First, the degradation rates are low when compared to temperate regions on Earth. Second, the measured nuclide profile indicates erosion and sublimation have been operating for > 105 years without vertical mixing. These two results would allow glacial deposits in the MDV to maintain their morphology and contain ground ice close to the surface for millions of years. Degradation without creep or vertical mixing would result in parallel retreat of the slopes of a moraine such that it would maintain steep slopes and a fresh appearance on the landscape. As ice sublimes through a till layer the permafrost table will lower through a soil, and if the overlying till is also lowering due to erosion then the permafrost table may persist near the surface. Erosion of the units above ground ice or relict glacier ice may explain how this ice continues to lie beneath a thin layer of overlying debris even though it is actively subliming, without a need to invoke recharge mechanisms.

« Slow erosion without creep in the McMurdo Dry Valleys, Antarctica       Fluvial geomorphology in a tank - The scientific value of physical experiments »