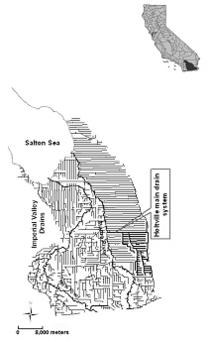 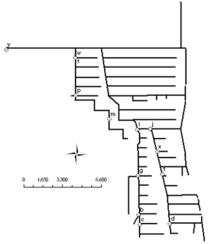 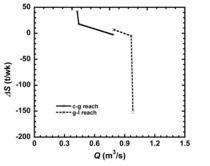 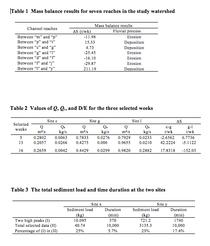 Hide
Tables 1, 2, and 3. Table 1: Mass balance results for seven reaches in the study watershed. Table 2: Values of Q, Qs, and D/E for the three selected weeks. Table 3: The total sediment load and time duration at the two sites. Details

Suspended sediment refers to grains moving in suspension in flows because the weights of these grains are balanced by the upward lift force caused by flow turbulence. It can originate either from channel bed and banks or from hillslope areas contributing to the channels. Suspended sediment serves as a major pollutant that degrades water quality of rivers, lakes, and coastal environments. Although suspended sediment load in the main stream channel is related to river hydraulics such as water discharge and the shape of channel cross section, it is more affected by sediment supply from contributing areas of rivers where the supply rate is the function of a coupling effect of land use and cover, soil type, topographic structure, and precipitation patterns. The primary identified areas for sediment supply are agricultural lands, deforested sites, and urban areas, which are collectively called non-point sources of pollution. Therefore, determination of total suspended-sediment load at the watershed scale is critical for establishing criteria for the maximum daily amount of sediment aquatic vegetation can tolerate (i.e. total maximum daily loads, TMDLs), based on which best management practices can be designed. However, the process of suspended sediment transport is complex and the amount of suspended sediment load per year for a given watershed is not easy to determine. This study demonstrates such complexity in an agricultural drainage system in southern California (Gao et al., 2007).

The Imperial Valley agricultural drainage system is the major component of the Salton Sea watershed located in southeastern California (Fig. 1). It has been listed as an impaired water body in terms of California's Clean Water Act Section 303 (d). The primary cause for the impairment is the suspended sediment with sizes ranging from clay, silt, to fine sand, and is largely originated from dispersed agricultural lands in the Imperial Valley. The study area, the Holtville main drainage system, is 114.5 km2 and consists of a linear channel network to the east and a dendritic network to the west. The variations of sediment concentration sand flow rates are investigated by a sampling strategy involving thirteen sites (Fig.2) to collect weekly sediment samples (from September 2003 to January 2004) on the first-order drain channels (i.e. sites b, x, and w), and three main tributaries (i.e. sites m, c, d, p, g, f, t, l, and j). In order to understand the temporal changes of sediment load within a week, sediment data were collected at the 5-minute interval using both a turbidity sensor and a pressure transducer at sites x and y.

If DS is positive, then erosion occurs in the reach; if DS is negative, then deposition occurs in the reach. Values of DS for the sampled reaches were calculated using eq. (1). The general distribution of DS in these reaches did not show any clear spatial pattern, though absolute values of DS were small at smaller spatial scale (e.g. 4.73 t/wk in the c-g reach) and big at larger spatial scale (e.g. 211.19 t/wk in the l-y reach) (Table 1). This means the spatial distribution of suspended sediment is complex.

To further understand such complexity, values of Qs from three randomly-selected weeks along c-g-l reaches were examined in detail (Table 2). On the one hand, as Q increased, Qs in sites c, g, and l was not always increasing with Q. On the other hand, DS in the two associated reaches (i.e. the c-g and g-l reaches) consistently decreased as Q at the outlets of the two reaches (i.e. the sites g and l) increased. This suggests that in both reaches, as Q increased, the process of sediment transport changed from deposition to erosion. In spite of the similarity, the two reaches also showed differences (Fig. 3). First, the same amount of DS (e.g. 5 t/wk) may be caused by smaller Q in the c-g reach (i.e. about 0.65 m3/s) than that in the g-l reach (i.e. about 0.83 m3/s). Second, the critical Q at which the process of sediment transport changed from deposition to erosion was about 0.81 m3/s in the c-g reach, while about 0.94 m3/s in the g-l reach. One has to realize that the difference is mainly caused by the fact that the c-g reach had fewer cumulated agricultural fields than the g-l reach. Therefore, a clear spatial pattern of sediment transport may be obtained by eliminating such spatial effects through defining two new variables, unit area discharge Qa (m3/s.km2) and unit area net sediment discharge DSa (t wk-1km-2):

Using these two variables, an empirical model for sediment transport at the entire watershed scale can be subsequently developed:

The above-mentioned spatial patterns of sediment transport are based on data collected at the weekly scale. Nonetheless, the 5-minute data collected at the site x and y for the period of about one week (Fig. 4) showed that the data contained several sediment peaks and troughs (represented by the solid curve in Fig. 4). At the small scale (i.e. site x), sediment peaks were clearly caused by individual irrigation event as the channel is directly connected to agricultural fields. Yet, at the large scale (i.e. site y), sediment peaks were the collective effect of both multiple irrigation events and mixing of different sediment concentrations from different channel branches. Therefore, sediment concentration C was much higher at site x than that at site y. Figure 4 also exhibits that considerably high C occurred in quite a short period with relatively high Q (i.e. the two high sediment peaks at sites x and y). The calculated time durations and total sediment loads for the two high sediment peaks and all selected data at both sites showed that at site x, about 25% of total sediment load was carried out of the first-order drain in less than 6% of the total time period (about a week), while at site y, only 23% of total sediment load was produced in about 18% of the same period (Table 3).

These results revealed two features that failed to be represented by the empirical model at the weekly scale: (1) in a period of one week, a large amount of deposition may occur in less than one day and gradual erosion may dominate the rest of the time, (2) both magnitude and duration of deposition in one week progressively decreased as spatial scale increased (i.e. from upstream to downstream channels).

Slow erosion without creep in the McMurdo Dry Valleys, Antarctica »