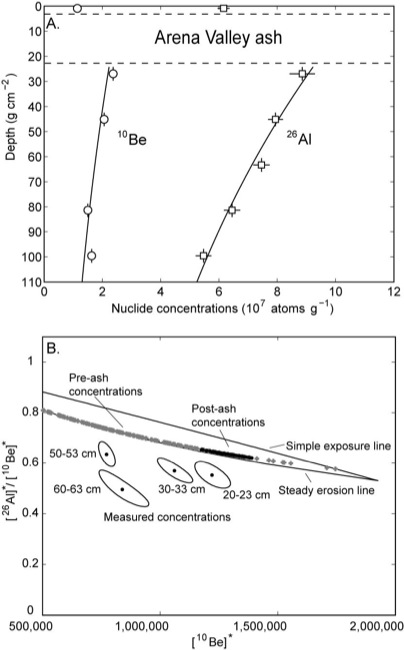 Figure 4. Measured 10Be (circles) and 26Al (squares) concentrations (atoms g-1quartz) at the Arena Valley ash site. The small vertical and horizontal lines indicate the range of depth of the sediment sampled and the error in the nuclide measurement, respectively. In some cases, these values are smaller than the markers used to indicate each datum. The white box shows the approximate location of the Arena Valley ash in the soil column. The solid lines show the predicted nuclide concentrations for the best-fit model results where the erosion rate after the emplacement of the ash was ~0.2 m Ma-1.

Last Modified: 2014-10-27 20:49:48
Permanent URL: https://serc.carleton.edu/download/images/18431/data_arena_valley_ash.jpg
The file is referred to in 1 page
Provenance
Created by the author of the page containing
this file.
Reuse
This item is offered under a Creative Commons Attribution-NonCommercial-ShareAlike license http://creativecommons.org/licenses/by-nc-sa/3.0/ You may reuse this item for non-commercial purposes as long as you provide attribution and offer any derivative works under a similar license.