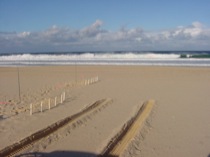 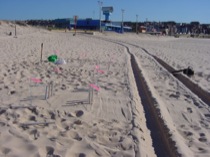 Hide
Photograph showing the control experiment with the different layout of wind sand traps, the vehicle tracks and the garden leaf blower in position. Details 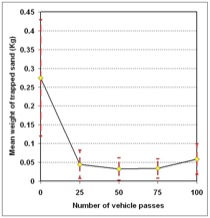 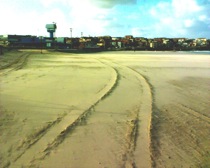 The use of 4-Wheel Drive (4WD) vehicles on coastal beaches is an activity that attracts considerable controversy amongst beach users. 4WD vehicles are currently permitted access to hundreds of beaches throughout Australia.

The ecological and physical impact of 4WD vehicles on beaches is an area of steadily growing knowledge. The effects on dune vegetation and vertebrates have been the focus of many studies with fewer studies directed towards the effects on invertebrates and the physical disturbance to the beach.

4WD vehicles directly physically alter beaches by affecting the beach surface with tyre tracks. The distribution of these tracks is principally between the lower swash zone (extent of wave run-up) and the foredune. This zone is the source of sand for the creation, replenishment and growth of coastal dunes. Coastal dune systems play a substantial role in protecting and nourishing the beach and the areas behind it during and after erosion events.

It was hypothesized that the tracks created as a result of driving a 4WD vehicle on a beach causes a change in the surface roughness that significantly disrupts the transport of sand from the beach to the dunes by the wind. It was thought that the vehicle tracks form a 'micro-catchment', trapping sand being transported across the beach and change the beach surface roughness, affect the airflow over the beach and the subsequent transport of wind-blown (aeolian) sand.

The second experiment was designed in such a way that the results would be statistically comparable. This involved artificially creating the wind using a garden blower and using replicate study plots (Figure 3). An analysis of variance (ANOVA) was conducted on the measurements taken and it was determined that vehicle tracks result in a significant reduction in the amount of sand transported compared to an unaffected section of beach (Figure 4). There was not a significant difference between the number of times the vehicle drove along the track.

This experiment concluded that the tracks caused by 4WD vehicles resulted in a significant reduction in the amount of sand transported when compared to an unaffected section of beach. This experiment is however limited in two aspects. The first is the duration over which the measurements were taken. Due to the size of the sand traps used, the experiments could not be conducted for greater than 5 minute intervals because the traps would reach maximum capacity. It was observed that after longer periods of time the vehicle tracks in-filled, thus reducing their impact (Figure 5). Secondly, the experiments were conducted across a single vehicle track, with multiple passes, however it is commonly observed that under normal use, multiple vehicle passes result in multiple tracks. These limitations are acknowledged, but the significant results obtained indicate the potential implications of vehicle tracks on the transport of sand from the beach to the dunes. Further research is required into the physical impacts of 4WD vehicles on beaches not only to address the limitations of this study, but to address other gaps in the current knowledge in order to insure the successful management and sustainable use of coastal beaches by 4WD vehicles.