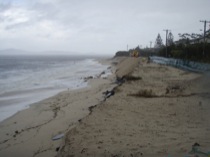 Hide
Photograph showing the erosion that is threatening property and infrastructure at Jimmy's Beach on the northern shoreline of Port Stephens. Details 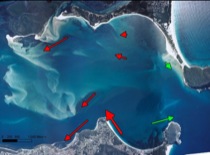 Hide
Aerial photograph showing the deployment locations and combined current velocity and duration index with dominant flow direction. Arrows are drawn to scale relative to index such that a longer arrow indicates a greater velocity or duration asymmetry. Details

Port Stephens is a popular tourist destination located on the mid-north New South Wales (NSW) coast, 230 km north of Sydney, Australia (Figure 1). Despite the regions popularity, it is not protected from the forces of nature and the wide-spread problem of coastal erosion that threatens the recreational value and infrastructure of the area (Figure 2). To successfully manage coastal erosion it is necessary to understand the processes responsible for the erosion, transportation and deposition of sediment.

Port Stephens is an estuary, which is a term used to describe an area that is the interaction of freshwater and marine systems. In this particular setting the freshwater or fluvial influences are largely confined to the western basin and the marine influences dominate the eastern basin (Figure 1). Marine influences refer to the supply of sediment to the estuary and the processes (waves and tidal currents) which are responsible for eroding, transporting and depositing this sediment.

A study is being undertaken to better understand these processes. The first step of this process is to record the tidal currents at representative locations throughout the eastern basin. This is achieved using two Acoustic Döppler Current Profilers (ADCP). These instruments are mounted on the sea floor and are capable of simultaneously recording the water velocity and direction at different depths above the instrument. This has been done at nine locations over a period of 13 months (Nov. 2007 to Dec. 2008). This data can then be used to characterise tidal flow patterns and infer sediment transport pathways.

Finer sediments exhibit a lag between the flow velocity dropping below that needed to transport the sediment and the sediment being deposited. Thus, the duration that a current flows in a particular direction is also of significance when inferring sediment transport. The duration of each flow phase have been processed in the same way as the current velocity to produce a residual phase duration. Since both current velocity and duration play a role in the transport of sediment, the residuals of these two variables were combined to produce an index value. This index value represents the residual direction and magnitude of the tidal current flow. This can be visualised (Figure 4) and used to infer net sediment transport patterns prior to more detailed analysis.

Some interesting results were observed from this study, most notably the occurrence of 'double dominance', whereby a greater mean velocity in a particular direction (phase) is paired with longer flow durations in the same direction (phase) (Figure 3). There is a prevalence of flood dominated flows over the shallower regions of the basin and ebb dominated flows at the entrance. These results indicate a complex interaction between the tidal circulation patterns and the estuarine morphology evident in the large sand shoals or 'flood-tide delta' that can be seen in the eastern region of the aerial photograph (Figure 4).