Width convergence in tide-dominated estuaries: the case of the Alligator Rivers, Northern Australia.

The Alligator Rivers estuaries. The image was captured by LANDSAT 5. Details 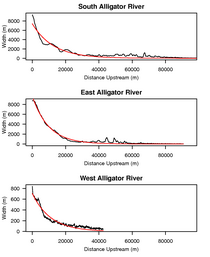 Hide
Width against distance upstream for the Alligator Rivers estuaries. The red lines are exponential curves, which were fit to minimise the residual variance between the fit and the data. Details

Hide
a) Measured mouth width against the parameter L from the exponential curve fit for estuaries on the north Australian coast (after Davies and Woodroffe, In Press). b) Three ideal exponential channels, with different shapes but the same value of L Details

The Alligator Rivers region is situated in the southeast corner of Van Diemen Gulf, northern Australia (Figure 1). It contains some excellent examples of tide-dominated estuaries (Figure 2). An immediately obvious feature of these estuaries is their strong upstream decrease in channel width (Figure 2). This morphology, which is often described as a converging or funnel shaped width profile, is typical of tide-dominated estuaries (Dalrymple and Choi, 2007). In this vignette we will consider some ideas about the form of tidal channel width convergence, and its causes. Firstly however, it is useful to review some background about estuarine geomorphology.

Many different definitions of the term estuary have been proposed (Dalrymple et al., 1992; Elliott and McLusky, 2002). Here we will assume that estuaries are semi-enclosed coastal water bodies, which form where rivers flow into the sea, and which receive sediment from both marine and fluvial sources. Estuaries are often classified as being either tide-dominated or wave-dominated. Theoretically, a tide-dominated estuary is one in which tidal currents are the most important driver of sediment transport in the estuary mouth (Dalrymple et al., 1992; Boyd et al., 2006). Wave-dominated estuaries can be similarly defined.

Importantly, the dominance of waves or tides in an estuary is strongly related to its morphology and facies distribution. Indeed, individual estuaries are most often classified visually as either wave or tide-dominated (rather than by the measurement of process), by comparing their morphology and facies distribution to idealized wave and tide-dominated models (Dalrymple et al., 1992; Harris et al., 2002; Boyd et al., 2006). This approach was used to classify the majority of estuaries in Australia (Harris et al., 2002), and in each case the results were compared with independent estimates of the wave and tidal power at the estuary mouth. Estuaries classified as tide-dominated usually had a higher ratio of tide to wave power than did estuaries classified as wave-dominated (Harris et al., 2002), supporting the proposed relationships between process and morphology. In sum, there are strong general relationships between morphologies and dominant processes in estuaries.

What are the typical morphological characteristics of tide-dominated estuaries? Although a range of different morphologies have been identified (Dalrymple and Choi, 2007), perhaps the most visually obvious is the upstream decrease in channel width. This can be seen to occur in the West, South, and East Alligator Rivers (Figure 2). In the literature, it has been commonly reported that the decrease in width occurs exponentially with distance upstream (e.g. Wright et al., 1973; Chappell and Woodroffe, 1994; Savenije, 2005). Mathematically then: Width ~ W*exp(-x/L) where W and L are fitting parameters, and x is the distance upstream.

How well does the exponential relationship apply to the Alligator Rivers? Figure 3 demonstrates it is indeed a good description of the Alligator river width profiles. Given this, the exponential fit provides some convenient statistics with which to summarise the estuarine width profile. The parameter W will be approximately equal to the estuary mouth width. The parameter L describes the rate of width convergence, and can be understood as follows: Suppose that you were in a boat at some point in the estuary at which you measured the channel width. Then L approximates the distance that you would have to travel upstream for the channel width to reduce by a factor of e (~=2.718) relative to the first measurement. According to the exponential model, this distance does not depend on where in the estuary you begin.

In the West, South and East Alligator Rivers, L is approximately 11, 12.5 and 10 km respectively. It is interesting that despite the large differences in the mouth size of these systems, their value of L is quite similar. Studies of other estuaries in nearby parts of Northern Australia have been conducted by Davies and Woodroffe (In Press), who found that L is typically in the range 5-30km, and does not seem related to the mouth size of the estuary (Figure 4). This result implies a strong change in estuary shape with mouth width: Estuaries with a larger mouth width tend to be more strongly funnel-shaped than those with a smaller mouth. This is illustrated visually in Figure 4, which depicts three idealised channels with similar values of L, but different mouth widths. Notice how channel 1 is most strongly funnel-shaped, with channels 2 and 3 begin progressively less so.

Why do tide-dominated estuaries tend to develop an approximately exponential width profile? A key point is that the tidal discharge at a given cross-section will depend on the tidal prism upstream of it. Thus the tidal discharge will increase as one moves downstream. In order to accommodate this increasing discharge, the estuary must exhibit a downstream increase in at least one of the following: cross-sectionally averaged velocity, depth, or width. It appears that often in nature, width increases accommodate most of the increase in discharge. Mathematical arguments based on these observations, and further simplifying assumptions, suggest that estuaries with a constant tidal range and cross-sectionally averaged velocity amplitude should exhibit an exponential width profile (e.g. Chappell and Woodroffe, 1994; Savenije, 2005). While the specific assumptions of these theories differ, any theory which assumes that estuaries adapt morphologically to meet certain constraints on their 1D tidal hydrodynamics (described in terms of velocities and water levels) will predict that L is independent of the estuary mouth width (Davies and Woodroffe, In Press).

Natural estuaries will of course not perfectly satisfy the strong assumptions underlying these theoretical arguments. Further work is required to fully understand the co-evolution of morphology, sedimentology and hydrodynamics in tide-dominated estuaries.