See also an introduction to Dune Morphology and Orientation in another vignette by Fitzsimmons. 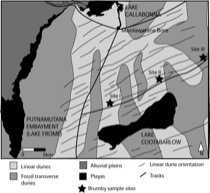 Hide
Figure 2 Map of the northern Strzelecki Desert region, showing the longitudinal profile, including cross sections and chronologies for the three sites. The rectangular boxes correspond to auger holes taken from the dune crests, from which samples were collected and stratigraphy interpreted. Note that Putnamutana is an embayment of Lake Frome, and currently lies between two palaeoshorelines (fossil transverse dunes) of palaeolake Frome. Details

The Australian desert dunefields are dominated by linear dunes, which form a large anti-clockwise whorl across more than one third of the continent (Wasson et al., 1988). Despite being so extensive, the mechanisms of regional scale formation of linear dunes through time and space are poorly understood (see vignette "Regional trends in desert dune morphology and orientation"). Linear dunes form broadly parallel to the resultant vector of sand-shifting winds, and can vary in length from several hundred metres to several hundred kilometres in length. Several models exist for linear dune formation at large scales. The downwind extension model proposes that linear dunes extend longitudinally by progradation along their length (Mabbutt and Sullivan, 1968; Wopfner and Twidale, 2001). In such cases, sediment derived from upwind dominates over locally-derived sediment, resulting in increasingly younger dune ages downwind and sediment evolution. In the windrift model, aeolian scouring ("wind rifting") of sediment from the local interdune swales onto dunes causes upward accretion of sediment, limited by supply (Hollands et al., 2006; King, 1960). The longitudinal morphology of the linear dune is maintained by deflection of grains along dune axes for short distances (Tsoar, 1978), resulting in downwind propagation of the dune morphology. Dune formation by this model would show no decline in age downwind, and would not rely on upwind sources of sediment.

The timing of linear dune activity along a longitudinal transect may help us to better understand the process of linear dune formation as a function both of space and time. The region of linear dunes on the south-western margin of the Strzelecki Desert in central Australia, east of the large playa Lake Frome, provides an excellent site to test the proposed models of dune formation, since dunes there preserve multiple stratigraphic horizons separated by paleosols, and in many places overlie fossil transverse source-bordering dunes. The preservation of dune stratigraphy indicates the occurrence of multiple dune building events at different points along longitudinal transects, and the proximity or otherwise of fossil transverse dunes indicates relative availability of sediment locally. The fossil transverse dunes are designated as such, despite not lying immediately adjacent to Lake Frome, since they originally formed as shorelines adjacent to a more easterly ancestral lake which migrated westwards over time. Each fossil transverse dune was preserved following episodes of lake depocentre migration or regression. They are subdued features in the landscape due to degradation over time. Dune orientation does not align exactly with the current wind regime, indicating that the dunefields are largely relict features that formed under wind conditions different from those prevailing today.

The role of downwind extension versus local aeolian wind rifting in dune formation was tested by sampling three sites along an approximately 20 km longitudinal transect of an individual dune (Figure 1). The three sites represent the point of genesis (I), a point roughly halfway along the dune's length (II), and its terminus (III). The longitudinal profile traverses two fossil transverse dunes which are topographically subdued and rarely discernible in the field. The linear dunes have migrated longitudinally over these features. The transverse dunes probably acted as sediment sources over time, and may also have reactivated at the same time as the linear dunes were forming (e.g. Fitzsimmons et al., 2007a).

The sedimentology of the three linear dune sites is very similar. Substantial proportions of feldspar and rock fragments, and zircon provenancing studies, suggest that sediments across this region were derived from the basement rocks of the Flinders Ranges to the west (Fitzsimmons et al., 2009; Pell et al., 2000). Feldspar content is especially high at sites that overlie transverse dunes, and within the transverse dunes themselves, however there is no systematic variation in feldspar content with distance from the Lake Frome playa or Flinders Ranges at this scale (Fitzsimmons et al., 2009). This suggests that dune formation may rely on local windrifting. Site I contains clay pellets, which were deflated from adjacent, periodically-inundated, swales. The instability of clay pellets under long distance transport further supports the hypothesis for local windrifting as the dominant mechanism for linear dune formation.

Optically stimulated luminescence (OSL) dating was undertaken on samples from each of the stratigraphic units identified at sites II and III, and at regular depth intervals for site I (Fitzsimmons et al., 2007b). The oldest reliable ages for the longitudinal transect occur at site I and indicate activity between approximately 28-34 ka (Figure 2). The three ages are within 2σ of one another and effectively represent deposition of at least 3.2 m of sediment in a single event. The uppermost age at site I lies within 2σ of all the reliable linear dune ages at the other sites (Figure 2), implying effectively coeval aeolian activity at all three sites between approximately 16.5-13.6 ka. The lowermost ages at site I predate those at site II, which may indicate downwind transport over time, but this is unlikely given the age of ~52 ka from the lowermost linear dune horizon at site III further downwind.

In the case of this transect in the south-western Strzelecki Desert there is no unequivocal evidence for a downwind decrease in age, as would be expected for dune development by downwind extension. Nor does the sedimentological evidence suggest a decrease in feldspar content downwind, which might also occur with downwind extension. Furthermore, thermoluminescence (TL) dating of linear dunes in the Simpson Desert to the north supports local windrifting. Luminescence dating is therefore a useful tool which assists with the testing of previous empirically unassessed hypotheses for geomorphic processes, since the chronologic evidence is consistent with the sedimentological evidence of locally derived material. Based on the combined evidence of geochronological, sedimentological and stratigraphic methods, the windrift model of local reworking and accretion is favoured.