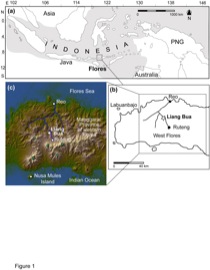 Hide
Figure 1: (a) The Indonesian archipelago. (b) A map of western Flores showing the location of Ruteng and Liang Bua (white star). (c) A LANDSAT image of western Flores and the study region. Source: Westaway et al. (2009). Details 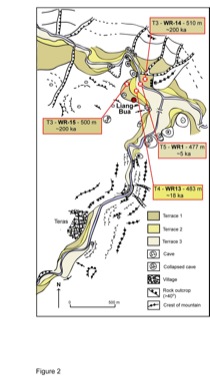 Hide
Figure 2: A geomorphological map of the topography close to Liang Bua. The location of the sampling sites (red circle with a cross), terrace number, age, sample code and height above sea level have been included in boxes. Source: Westaway et al. (2009). Details 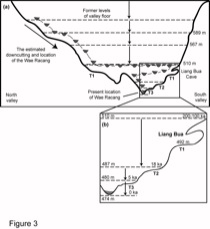 Hide
Figure 3: A reconstruction of the terraces in Wae Racang valley. (a) The estimated location of the river and valley floor during alluvial downcutting of the valley. (b) The height above sea level and age of the terraces. Source: Westaway et al. (2009). Details

Hide
Figure 4: A reconstruction of the geomorphological events before and after the exposure of Liang Bua. (a) The cave as a subterranean chamber (b) tectonic uplift and alluvial downcutting brought the valley floor within close proximity to the chamber, (c) the Wae Racang wandered across the valley (d) causing collapse, river invasion, and the deposition of conglomerate deposits. (e) As the river continued its downcutting momentum, modifications occurred to the cave form. Source: Westaway et al. (2009). Details

Liang Bua, in western Flores, Indonesia (Figure 1) is a large limestone chamber with a wide entrance and a cathedral-like atmosphere. It's name, meaning 'cool cave' explains its attraction as an occupation site for early hominids. But the cave hasn't always been so appealing. Liang Bua was originally a subterranean chamber and was later exposed by landscape processes, such as river downcutting and cave collapse that were fuelled by rapid tectonic uplift. Presently, the site is situated at the same elevation as the highest of three alluvial terraces (510 m), which were deposited by the Wae Racang river in a wide Miocene limestone valley. The sub-aerial exposure of Liang Bua created the first opportunity for human occupation and since then the cave has accumulated a wealth of archaeological material during a ~100 ka occupation period, including the almost complete skeleton of Homo floresiensis.

Establishing when the cave was exposed provides an understanding of how landscape processes interact within a tropical karst valley and helps us to establish a maximum age of occupation for the site. Evidence for the exposure of Liang Bua can be gained from: 1) the age of the adjoining river terraces outside the cave; 2) the pattern of cave collapse; and 3) the age of alluvial deposits found in the cave.

1. The age of the stepped river terraces.
The Wae Racang flows for ~25 km from the slopes of Ruteng town north to the sea at Reo (Figure 1b, c). Tectonic uplift in this region has triggered rapid river downcutting and the abandonment of the original floodplain creating a series of three stepped alluvial terraces (Figure 2). The first has been extensively eroded by river action in the vicinity of Liang Bua and has suffered limestone collapse, preserving only a remnant of its original extent. On the northern side of the valley, the third terrace is extensive, with only a dry valley running westwards to interrupt its form. The second terrace is most apparent in front of Liang Bua, where it laterally extends for 62 m along the flanks of the river valley. On the opposite side of the river the second terrace is absent and the first terrace extends straight down to the present river channel. The third alluvial terrace is a Holocene deposit that extends down to the Wae Racang (474 m), but it is absent directly adjacent to Liang Bua.

The ages of these terraces, provided by luminescence dating of sediment, combined with key sedimentary characteristics and terrace morphology, provides a timescale for the location of the river during terrace development (Figure 3). The river would have been able to reach the same elevation as the cave, via overbank deposition of the first terrace between 250-215 ka, suggesting that the river occupied the same elevation as the cave ~200 ka. It subsequently eroded its floodplain over the next 100 ka, reaching the elevation of the second terrace at ~18 ka followed by the third terrace during the Holocene at ~5 ka.

2. The pattern of cave collapse.
The soft, impure, tuff-bearing clastic limestones of this region facilitate high densities of solution features that are prone to collapse. Tectonic uplift encourages valley deepening and weakens the structure of dissolution chambers, which is the primary cause of collapse in this landscape (Figure 4). Evidence of this process can be observed in the sediments of Liang Bua at ~5 m, where the presence of huge limestone blocks suggests that the cave entrance underwent large-scale collapse. This process was important for initiating the accumulation of archaeological evidence as it transformed a discrete opening into a wide entrance, thereby creating an environment suitable for human occupation.

3. The age of the alluvial conglomerate deposits
An extensive alluvial conglomerate dominates the southern end of Liang Bua, extending 18 m from the rear wall. The volume of this deposit, its location, and the calibre and composition of its clasts indicate high-energy fluvial transport and deposition of allogenic sediments. The deposition of these fluvial sediments represents the first exposure of the cave by the Wae Racang (Figure 4). The age of the conglomerate cliff exposure ~190 ka indicates that sub-aerial exposure of the cave occurred no earlier than the late Middle Pleistocene, which agrees with the age range of the first alluvial terrace at ~200 ka. Thus, ~190 ka is viewed as being a maximum age for the exposure of Liang Bua and a maximum age of occupation for the site. This chronological evidence provides a context for archaeolgical evidence found within these deep cave sediments.

« Climate change in the dead heart of Australia       Reconstructing the geomorphic history of a cave: a case study from Liang Bua, Indonesia »