Climate change in the dead heart of Australia 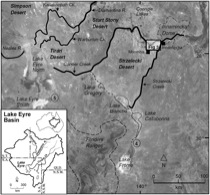 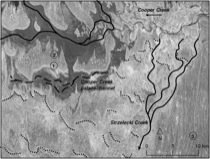 Hide
Figure 2. Cooper Creek exits a confinement at Innamincka, in South Australia, and flows into a large alluvial and aeolian fan which comprises most of the Strzelecki desert. Solid lines indicate contemporary river flow paths, and the dashed line indicates identified palaeochannels beneath the floodplain. The dotted lines show the 'source-bordering' aeolian dunes which run parallel to the palaeochannels. The linear dune clusters have then spread downwind from these source bordering dunes. Details

Hide
Figure 3. View of Cooper Creek and the linear dunes of the Strzelecki Desert from the air. Today Cooper Creek is a mud dominated system, but in the past it would have transported abundant sands, which were then re-worked by wind to form the dunes. A sinuous palaeochannel would have onced flowed at the bottom of the photograph, supplying the sand for the linear dunes in the main part of the photograph. Details 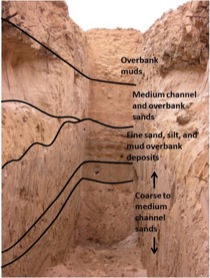 Hide
Figure 4. This pit was dug in the floodplain adjacent to Strzelecki Creek, on the eastern edge of the Strzelecki Desert. Numerous cut-and-fill cycles can be seen in the stratigraphy, where the river has had to respond to changes in discharge, and also base level (change in lake level) over the last ~100,000 yrs. Details

Despite the absence of large-scale glaciation, the Australian continent has experienced substantial environmental change throughout the Quaternary period. This is especially pronounced in central Australia, where one seventh of the continent is drained internally to the depocentre, and lowest point in Australia, Lake Eyre (Figure 1). Research has shown that at one time, large sandy braided and meandering rivers carried water through dunefields to a large freshwater lake system. Today, the rivers are hostage to the dunefield, and floodwaters might only reach Lake Eyre once every ten years or so. In order to understand the development of this arid desert landscape, and how changing climates have affected it, we need to find out when rivers and dunes were active, and how they are related to each other.

Large volumes of fluvial and aeolian quartz sand have been deposited and reworked within central Australia throughout the Quaternary. This is an ideal material for luminescence dating techniques, which allow us to determine the length of time these grains have been buried. If we combine this dating method with detailed stratigraphy of the rivers and dunes, a picture of changing wet and dry environments begins to emerge. This approach has been taken in the Strzelecki Desert, where Cooper and Strzelecki Creeks run through an expansive linear dunefield.

Looking from above, be it from a satellite image or from an aircraft, it is obvious that contemporary river patterns are affected by the position of the linear dunes (Figures 1 & 2). It is also apparent that the linear dunes are grouped into discrete clusters, with a flat muddy floodplain in between (Figures 2 & 3). Interestingly, if we dig beneath the linear dunes and floodplain, we find abundant fluvial sands, which stand in stark contrast to the mud dominated fluvial system of today (Figure 4).

Why then, do we have so much fluvial sand beneath muddy floodplains and linear dunes? Clearly Cooper and Strzelecki Creeks were much more active in the past, and the substantially higher discharges allowed transportation of coarse sands in braided and meandering streams. Most of this fluvial sand was transported during previous interglacials (i.e. warm stages), albeit with declining amounts with each successive interglacial. However these rivers also maintained active channels throughout glacial periods (i.e. cold stages) as well, suggesting that although rainfall and discharge had declined, central Australia was not completely dry during glacial periods.

It is also clear that fluvial transportation of sand was the dominant source of sand for the linear dunefields. The rivers were probably seasonal, and this allowed sand to be blown from the channel and into 'source bordering' or transverse dune features running parallel to the channel. These large source bordering dunes were then reworked into the linear dune clusters that cover the Strzelecki Desert. The ages of the linear dunes do not seem to reveal any significant growth during glacial or interglacial periods, in fact, they have a very steady, linear growth rate for at least the last 100,000 years. This suggests that the development of linear dunes in central Australia was not directly driven by changes in global climate, but rather by local and regional changes in sediment supply.

What does all this tell us about climate change and dead heart of Australia? Large rivers once flowed across the Strzelecki Desert delivering sand, which could then be used to build the dunes. Discharge has steadily declined over the Quaternary, such that today, the rivers are a shadow of their former selves. The linear dunes have probably been slowly accreting throughout this time, building first from fluvial sands, and then from the re-working of smaller dunes. Central Australia has, therefore, been able to build its dunefields for at least the last 100,000 years, and probably much longer. It was also much wetter, especially during interglacials, and the rivers would have supported a diverse riparian habitat and fed large freshwater lakes. However, during the current interglacial, central Australia is just as arid, if not more arid, than during any previous glacial period. Why is this so? No one is really sure. Some researchers believe human arrival dramatically altered the vegetation which in turn altered the climate, whereas others believe the climate has changed all on its own as the continent has slowly drifted northwards. Whichever the case, it seems the dead heart of Australia has much more to reveal about climate change.