Reconstructing the geomorphic history of a cave: a case study from Liang Bua, Indonesia 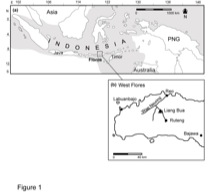 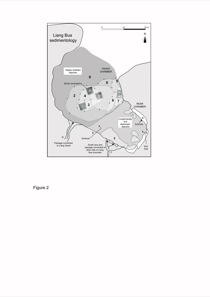 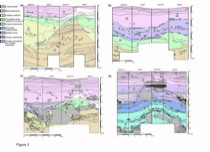 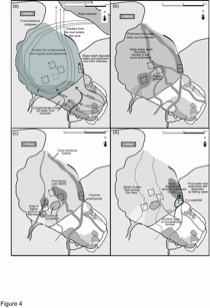 Hide
Figure 4: “Time slices” of the geomorphic evolution of Liang Bua (a) 130 ka - the collapse of the front entrance and the erosion of the deposits by a tributary (curved arrows) of the Wae Racang (solid unit) combined with slope wash from the rear channels (thick arrows). (b) 100 ka - the removal of the pond water and the formation of channels created areas of higher ground (light shading in front chamber) and an uneven cave floor topography. (c) 70 ka - the formation of small, standing bodies of water and the creation of small zones of occupation (dark shading in the front chamber). (d) 18 ka - the creation of a new zone of occupation in Sector XI. Westaway et al. (2009). Details

Liang Bua, a large cave situated 16 km from Ruteng in western Flores, Indonesia (Figure 1), was formed as a subterranean chamber over 600 ka. From this time to the present, a series of geomorphic events influenced the structure of the cave and deposits (revealed by excavations SI-SVII, Figure 2), creating a complex stratigraphy (Figure 3) containing stone artifacts, plant and animal remains, pottery, metal items and skeletal remains including Homo floresiensis. Within these deposits, nine main sedimentary units have been identified (Figure 3). The stratigraphic relationships between these units provide the evidence needed to reconstruct the geomorphic history of the cave. This history was dictated by rapid uplift and dominated by water action including slope wash processes, channel formation, pooling of water, and flowstone precipitation, which created waterfalls, cut-and-fill stratigraphy, large pools of water, and extensive flowstone cappings.

The sediments in the cave can be divided into two areas: the rear chamber, comprising mainly of in situ and modified conglomerate and slope wash deposits (Figure 2), and the front chamber, consisting of deeply stratified and complex interbedded deposits (Figures 2 and 3).

Unit 1 is a densely packed clast-supported conglomerate with a coarse matrix of silty sand (Figure 2). It represents the river's first high-energy entry into the cave and the oldest unit at ~193 ka according to the results of red TL dating techniques. The river deposited conglomerate in the rear and domed front chamber and during the last interglacial (~130-120 ka), the unit was modified by extensive erosion and the deposition of slope wash (Figure 4a).

Unit 2 is a basal unit consisting of fine silts and clays and contains lenses of coarse sand, low-angle cross-bedding of coarse and fine units, with some non-parallel and convoluted bedding (Figure 3, Unit 2). This unit was deposited by suspension at ~100 ka in a pond that was derived from slopewash from other caves in the system.

Unit 3 is collapse material (fallen pressure slabs) and slumped channel infill containing stone artifacts and bone at relatively high densities (Figure 3, Unit 3). It was deposited in scoured channels and represents the oldest intensive occupation layer. The collapse material from the evolution of the domed cave roof created a dam that filled with channel infill ~95 ka. This age range supports the notion that the river had stopped entering the cave, and the ponding events had ceased by ~100 ka (Figure 4b).

Unit 4 is an occupation deposit with high concentrations of stone artifacts and bone, including those of neonatal Stegodon, giant tortoise, and Homo (Figure 2, Unit 4). It contains a matrix of silty clay capped by flowstone and represents the second main layer of occupation. The arrangement of pools and channels during this period almost surrounded an area of cave floor directly to the southwest of Sector IV (Figure 1), which after a period of channel erosion created a greater relief and formed a remnant area of higher ground. This area is thought to have been a zone of occupation, representing a flat, dry haven within the cave environment (Figure 4c).

Unit 5 is a fine clayey-silt suspension deposit that accumulated in a pool created by the decline of an originally erosive, wide and deep channel by the east wall of the cave ~55 ka (Figure 2, Unit 5).

Unit 6 is a reworked conglomerate eroded from the easterly corner of the rear and front chambers and deposited in the newly formed pool between 55-41 ka (Figure 2, Unit 6).

Unit 7 is a clayey-silt occupation deposit containing the LB1 skeleton (holotype of Homo floresiensis) and contains a further phase of intensive occupation. This unit represents a pool deposit containing the skeleton and bank deposits containing stone artifacts, hearth stones, charcoal, and bone, including Stegodon, Komodo dragon, and other hominin remains (Figure 2, Unit 7). The pool by the east wall persisted in the cave environment for at least ~ 40 ka from 55-11 ka, and the absence of sedimentary structures suggests that either the pool varied in depth, or the rear sinkholes and resulting waterfall was a source of intermittent disturbance and sedimentary infilling. The presence of a pool at this time is one of the reasons for the excellent preservation of the skeletal evidence, as once emplaced it was rapidly covered in fine silts during a period of channel inactivity. The bank deposits of the pool also represented an area of higher ground and a zone of occupation ~18 ka (Figure 4d).

Unit 8 is a volcanic deposit consisting of a coarse black volcanic sand and fine silt layers containing tephra that both represent primary airfall deposits and were deposited in pools by suspension (Figure 2, Unit 8). Between ~18-16 ka the black sand unit was deposited by the east wall and represents a localized eruption. Between 12-11 ka the pool acted as a sink for accumulating tephra deposits from an extensive volcanic eruption that is more regional in its origin.

Unit 9 is a younger occupation and modern slope wash deposit consisting of clayey silts and sandy silts and contains charcoal, fire-reddened clays, Neolithic material including pottery, burials, and a high density of artifacts (Figure 2, Unit 9). It was deposited at ~10 ka when the pools and channels had disappeared, sheetwash replaced rill wash and overland flow, resulting in the horizontal deposition of clayey silts. This process removed the uneven topography and created a level cave-floor surface that was better suited to occupation.

The sequence of geomorphological events interpreted from these units (e.g., exposure of cave and high-energy deposition, suspension in a pool, creation of higher ground, channel erosion, cut and fill, bank and pool deposition, volcanic events and sheetwash) restricted occupation to certain zones (Figure 4). Continuous occupation of the cave may not have been possible until after ~100 ka, when the accumulated water had drained from the front chamber. The next ~89 ka were dominated by flowing water creating waterfalls, cut-and-fill by channels, periodic pooling of water, and occasional volcanic events and the creation of zones of occupation - two earlier zones established ~74-61 ka by the west wall and center (Figure 4c) and a later zone ~18 ka and located by the east wall (Figure 4d).