Human Impacts on the Landscape

Figure 2 This excavator can load a 70 m3 truck in 5 scoops. (Photo courtesy of Douglas Jacobson) Details

Figure 3. Estimates of the mass of earth moved per capita at various times in the past (After Hooke, 2000) Details

Figure 4. Estimate of total mass of earth moved by humans at as a function of time. (After Hooke, 2000) Details 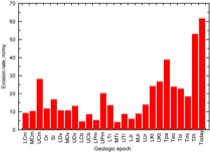 Humans move tremendous amounts of earth every year. They are arguably the premier geomorphic agent sculpting the surface of Earth today.

In the early 1990s, people in the United States were moving about 0.8 Gt (Gt = gigatons, or 1 billion metric tons) of earth in house construction, 3.2 Gt in mineral production, and 3 Gt in road construction every year (Hooke, 1994). If this much earth were dumped into the Grand Canyon annually, it would fill the canyon in about 400 years, or about 0.01 percent of the time it has taken the Colorado River to carve it! Such a comparison is not so far-fetched as one might think. A common method of coal mining in West Virginia today is mountain top removal (Fig. 1). To gain access to coal seams at depth, entire mountain tops may be unceremoniously shoved into adjacent valleys, filling the valleys.

Scaling this earth moving to the world as a whole, I estimated that humans were moving 30 to 35 Gt of earth every year (Hooke, 1994). This estimate is likely to have been conservative, as it did not include earth moved in construction of commercial buildings, dams, levees along rivers, and in many other endeavors. Nor did it include earth moved in agriculture. For comparison, meandering rivers, worldwide, may shift 25 to 40 Gt of sediment from the outside bank of one meander bend to the point bar in the next during a year, and other geomorphic processes move much less material (Table 1). Table 1 (Acrobat (PDF) 31kB Oct29 09)

About 1500 Gt of soil are moved annually, worldwide, in plowing (Hooke, 1994). Most of this is simply transferred from furrows to ridges, and is then washed back to fill the furrows; no permanent landform is created. On the other hand, about 75 Gt/y is actually eroded from the plowed fields by wind and water (Wilkinson and McElroy, 2007). A lot of this is deposited only a short distance from the field on slopes and in floodplains, but 10 to 15 Gt/y may be transported all the way to the oceans (Judson, 1968; Hooke, 1994). Soil is being removed from farm fields at about 10 times the rate at which it is being formed by weathering processes (Montgomery, 2007), an estimate that does not bode well for the long term viability of the world's food supply, especially in view of the alarming rate of population growth.

Montgomery (2007) has noted that civilizations tend to expand rapidly while agriculture in fertile valley bottoms allows populations to grow. To feed the growing populations, farmers begin to use sloping land on valley sides. Erosion of the hillslope soils follows. Once no new land is available on valley sides, nutrient depletion and soil loss encourage increasingly intensive farming, which results in further soil loss. In some cases, agricultural capacity eventually becomes inadequate to support the burgeoning population, triggering societal decline, commonly accompanied by warfare, and finally collapse. This was a key thread in the collapse of the Mayan civilization in Central America, and also contributed to the collapse of the civilization on Easter Island in the Pacific, and of the Viking settlements in Greenland (Diamond, 2005). There is no inherent reason why a similar scenario could not play out, worldwide, in the near future, especially considering the current global food shortage, the overdependence that most of us have on oil exporting countries, and the vastly increased military prowess available.

Of course humans have not always been such prolific earth movers. The earliest archeological record of human earth moving is from 1.5 million years ago when people, probably of the species Homo erectus, pressed pebbles into muddy soil on the banks of the Jordan River near present day Ubediyeh in Israel to make a firmer living surface (Nur, 2008, p. 52). Subsequent milestones in the motivation and ability of humans to move earth occurred in the Mesolithic, about 9,000 B.P. (B.P. = before present), when the hunter-gatherer way of life gave way to farming and village life; about 5,000 B.P. and 3,500 B.P. at the beginning of the Bronze and the Iron ages, respectively, when the desire for minerals led to expanded mining, and metal tools facilitated earth-moving activities; about 200 B.P. when steam power and the Industrial Revolution led to a need for coal and at the same time provided machinery for mining coal and other earth-moving endeavors, and finally a century ago when the internal combustion engine eventually led to the humongous excavators of today, some of which can pick up 30 tons at a swipe (Figs. 2 and 3). When the curve in Figure 3 is multiplied by the population at various times in the past, the explosion in human earth moving in the last century is staggering (Fig. 4).

To examine sediment fluxes over a still longer time span, Wilkinson (2005) has estimated sediment movement to the oceans over the past 500 million years by looking at the volume of sedimentary rock preserved in the geologic record (Fig. 5). The Pliocene and the present are unusual in Earth's history. The reasons for the large volumes of sediment delivered to the oceans during this time period are not known: glaciation may have increased erosion rates, but there were periods of glaciation in the Paleozoic. Perhaps continents are more emergent (higher above sea level) now than at any time in the past.

Regardless of the reasons for the increase in sediment flux to the oceans in the past few million years, it is clear that humans have become exceptionally proficient at moving earth, and that the consequences of this, particularly the resulting loss of agricultural soil, are cause for concern. Coupled with an impending shortage of the raw ingredients for fertilizer and active consumption of groundwater at rates faster than it is being replenished in many agricultural areas, it seems unlikely that Earth's present human population can be sustained for many more decades, let alone the projected increased population.

« Reconstructing the geomorphic history of a cave: a case study from Liang Bua, Indonesia       Radiocarbon calibration »