Research in cognitive science has identified a number of instructional strategies or "tools" that can be used to help students develop their spatial thinking skills. These tools include gesture, comparison (including analogy and progressive alignment), and sketching. Not surprisingly, geoscience educators have traditionally incorporated all of these tools in our teaching, though not always consciously or intentionally. Here's a brief summary of what cognitive science research says about how and why each of these tools is effective, and also about best practices for incorporating them in teaching spatial skills. You can read a more thorough description of the research supporting the use of these strategies in Ormand et al., 2017.

Jump down to read more about gesture | sketching | comparison or to see the reference list. 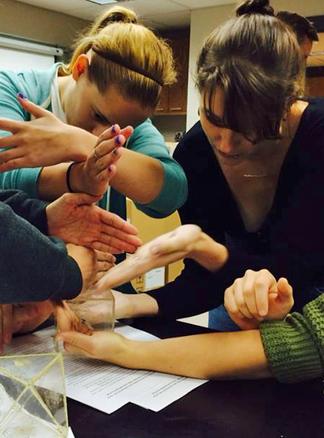 Provenance: Tina Hill, UW-Madison
Reuse: This item is offered under a Creative Commons Attribution-NonCommercial-ShareAlike license http://creativecommons.org/licenses/by-nc-sa/3.0/ You may reuse this item for non-commercial purposes as long as you provide attribution and offer any derivative works under a similar license.

You may think of gesture as a means of communicating spatial information, and it is. However, it can be more than that. Students who gesture about spatial relationships perform better on spatial visualization tests than students who don't gesture (e.g. Kastens et al., 2008; Goldin-Meadow, 2011; Atit et al., 2015). Moreover, students learn spatial concepts better when they gesture than when they watch someone else - even an instructor - gesture (Goldin-Meadow, 2011). This may be because gesture provides a mechanism for cognitive offloading (Goldin-Meadow et al., 2001). It is, therefore, important to move beyond gesturing at our students to having our students gesture to us or to each other. Indeed, students' gestures can provide us with insights into their thinking - literally making their thinking visible to us (Herrera and Riggs, 2013)

Geoscientists also routinely encode more information in gestures than may be apparent to our students. In general, gestures that convey meaning are classified as either deictic or iconic. Deictic gestures indicate an object's location, typically by pointing or tracing; iconic gestures indicate some aspect of an object, such as its shape. Geoscientists, however, sometimes combine these functions, using a single gesture to convey information about shape, location, and spatial orientation. For example, a sedimentologist might use gesture to illustrate the relationship between a single cross bed and the bed sets in a cross-bedded sandstone. However, our students may not be aware that the gesture is conveying multiple types of information, because that's not how most people use gestures (Atit et al., 2013). 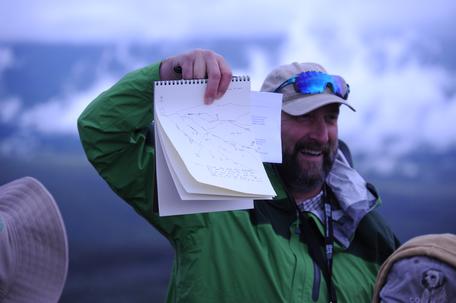 Provenance: Bob Krantz, ConocoPhillips
Reuse: If you wish to use this item outside this site in ways that exceed fair use (see http://fairuse.stanford.edu/) you must seek permission from its creator.

As with gesture, geoscientists often think of sketching primarily as a means of communication. However, just as with gesture, it can also be a useful tool for making our students' thinking visible. For this reason, sketching can be a powerful tool for assessing student learning (e.g., Johnson and Reynolds, 2005). In addition, sketching can be an aid to developing students' spatial thinking skills.

Sorby (2009) showed that sketching in 3D improves spatial visualization skills and results in higher rates of success in undergraduate engineering courses. Similarly, Gagnier et al. (2017) showed that having students make predictive sketches about the interior of an object, and immediately showing them the correct answer, boosted students' performance on penetrative thinking tests. Predictive sketching is just what it sounds like: you ask students to sketch a prediction. For example, Gagnier et al. asked students to sketch what they would see when they sliced through a play-doh model of a 3D geologic structure, such as a plunging fold. In essence, they asked students to sketch the cross-section. This exercise - making the sketch and then comparing it to the correct answer - helped students develop the ability to visualize the interior of geologic block diagrams (Gagnier et al., 2017). Since having students compare their predications to the correct answer immediately after they finish their sketch is an important component of predictive sketching, adding sketching to a course need not result in additional grading time for the instructor. It's more important for students to make and evaluate their own sketches than for you to grade them.

Comparison can be used to draw students' attention to key features of an object. Two common means of introducing comparison are analogies and alignment.

Analogies can help us to use what we know about familiar objects to develop our understanding of less familiar objects (Gentner, 1983). As with gesture and sketching, analogy is a common strategy used in teaching geoscience concepts (e.g., see Jee et al., 2010, and references therein; Davis and Fischer, 2016). Cognitive psychologists describe analogies in terms of "mapping" the features of a "target concept" - something less familiar, that we want to help someone understand better - onto a "base concept" - something that we presume they already understand. If there is a one-to-one correspondence between the features and characteristics of the base concept and the target concept, the analogy is straightforward. An analogy that takes this form is a powerful teaching tool. However, if there are any significant differences between the base concept and the target concept, it is essential to call students' attention to those differences. Otherwise, students will draw incorrect conclusions from the analogy (Jee et al., 2010; Resnick et al., 2016). 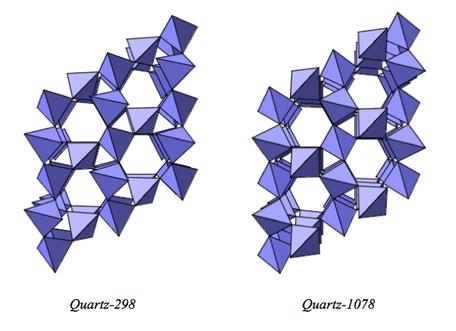 ×
CrystalMaker diagrams of the atomic structures of low-temperature and high-temperature quartz polymorphs.

Provenance: Carol Ormand, Carleton College
Reuse: This item is offered under a Creative Commons Attribution-NonCommercial-ShareAlike license http://creativecommons.org/licenses/by-nc-sa/3.0/ You may reuse this item for non-commercial purposes as long as you provide attribution and offer any derivative works under a similar license.

Making visual comparisons of similar objects or structures helps us to identify key differences. Progressing from comparisons of very similar objects to less similar objects scaffolds the ability to identify salient features (Gentner et al., 2007). This progression is called progressive alignment. For example, if we ask students to compare low-temperature and high-temperature polymorphs of quartz, that visual comparison will draw their attention to key differences in the atomic structures. If we then ask the same students to compare the structures of phyllosilicate minerals, that is a progression from comparing very similar structures to comparing somewhat less similar structures. Both of these activities are strong strategies for teaching and learning.