Prior Research on Spatial Thinking 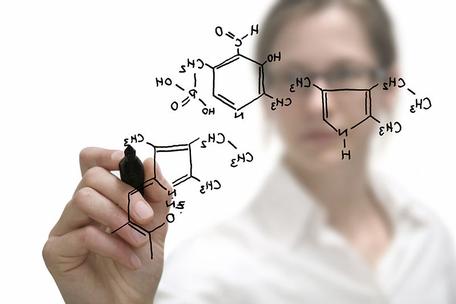 ×
Chemical compound being drawn by female chemist. Image courtesy of the United States Department of Defense.

Provenance: This image or file is a work of a Defense Advanced Research Projects Agency (DARPA), an agency of the United States Department of Defense, employee, taken or made during the course of an employee's official duties. As a work of the U.S. federal government, the image is in the public domain. Available via Wikimedia Commons: http://commons.wikimedia.org/wiki/File:Chemical_compound_being_drawn.jpg
Reuse: This item is in the public domain and maybe reused freely without restriction.

Spatial reasoning is critical to success in the STEM disciplines and the skills that make up spatial reasoning are not explicitly taught in current curricula (NRC, 2006). The ability to visualize spatial relations, such as object shapes, locations and how these can change over time, as well as how the observer may move within a spatial layout, all are fundamental skills necessary to understand and reason about STEM concepts and to communicate effectively with the sort of diagrams that are pervasive in STEM. This conclusion comes from both long-term longitudinal studies (e.g., Shea et al., 2001) and small-scale laboratory studies (e.g., Hegarty et al., 2009). Spatial skills are a strong predictor of selecting STEM majors in college and moving into STEM careers. Analyses of large-scale data sets of spatial skills measured in high school show that performance on standardized psychometric measures of spatial skills predicts success in STEM outcomes, e.g., success in STEM majors in college and professional entry into a STEM field (Shea et al., 2001; Wai et al., 2009; Webb et al., 2007). Smaller scale experimental studies lead to the same conclusions. For example, spatial skills influence the ability to interpret graphs and solve problems in physics (Kozhevnikov et al., 2007), and affect success in training for medical careers (Hegarty et al., 2009; Wanzel et al., 2002).

Spatial skills can be learned

Substantial improvements in spatial skills are possible and the improvement directly affects STEM retention. Meta-analyses of research on training spatial skills have found improvement on spatial test scores after modest amounts of training (e.g., 12 hours of playing Tetris – Terlecki et al. (2008), or 12 5-minute sessions of practice visualizing cutting solids – Lord (1985)), with effect sizes averaging 0.67, meaning the average improvement after training was two-thirds of a standard deviation (Baenninger and Newcombe, 1989; confirmed in an updated meta-analysis by Uttal et al., in review). In a study of training in the context of STEM education, increases in spatial test scores were found for engineering students provided with training in 3D visualization from 2D displays. The training increased students' chances of completing an engineering degree (Sorby, 2009). 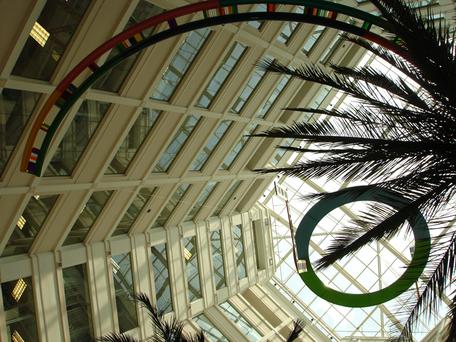 ×
Looking up in the atrium of the National Science Foundation building. Photo by Carol Ormand.

Provenance: Carol Ormand Ph.D., Carleton College
Reuse: This item is offered under a Creative Commons Attribution-NonCommercial-ShareAlike license http://creativecommons.org/licenses/by-nc-sa/3.0/ You may reuse this item for non-commercial purposes as long as you provide attribution and offer any derivative works under a similar license.

Spatial reasoning is not a single skill

Spatial reasoning is not a single ability. Converging findings in cognitive science, from cognitive psychology, linguistic, and neuropsychology, argue for a basic typology of four classes of spatial skills (Chatterjee, 2008). Briefly, these 4 classes involve spatial relations within objects (e.g., the orientation of the c-axis within a calcite crystal or the slope of a cross-bed) and relations between objects (e.g., the relative locations of outcrops, or the orientation of bedding relative to metamorphic foliation) crossed with static and dynamic versions of each.

We have found different profiles for the four skill classes in a survey of different STEM disciplines (Hegarty et al., in press). Geoscientists were notably high in all classes. The four classes fully encompass the spatial skills identified as important for geoscientists (Kastens and Ishikawa, 2006).

The majority of the research on spatial skills in the context of STEM education has focused on 2D to 3D visualization and mental transformations (rotation and folding). Only a small body of work in cognitive science of education has studied any of the other geoscience-relevant spatial skills (Kastens and Ishikawa, 2006). Research on individual difference in ability to visualize penetrative relations has found a broad range of skills across individuals and a consistent effect of gender (Kali and Orion, 1996; Hegarty et al., 2009). On average, males outperform females in measures of penetrative thinking. Hegarty et al. (2009) report effect sizes of 0.5 and 0.7 in their studies (males are, on average, one-half to seven-tenths of a standard deviation better than females). To put this in perspective, this is comparable to the most robust gender effects previously reported for spatial skills, which are well established for mental rotation (Newcombe et al., 1983). In addition, while there appears to be some shared variance, penetrative thinking is not the same as mental rotation and may require different cognitive processes. Measures of the two skills correlate only 0.5 overall, and only 0.3 when shared variance associated with reasoning ability is factored out (Hegarty et al., 2009). Thus, training penetrative thinking likely cannot be achieved by simply employing the known procedures for training mental rotation. 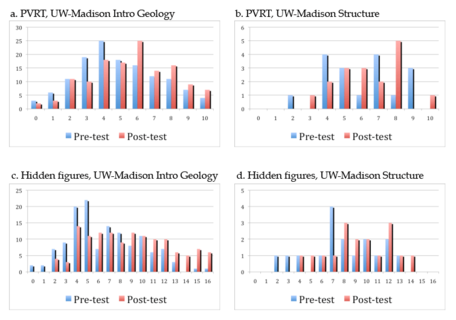 Reuse: If you wish to use this item outside this site in ways that exceed fair use (see http://fairuse.stanford.edu/) you must seek permission from its creator.

We have tested students' spatial skills in introductory and structural geology classes at the University of Wisconsin – Madison and in introductory geology, hydrogeology, mineralogy, structural geology, and tectonics classes at Carleton College. We find that students' skills vary enormously on a variety of psychometric and geoscience-specific tests, in both the introductory and upper division classes (see figure at right for a selection of typical results; click on the image to see a larger version). Further, we found that students' mental rotation and penetrative thinking skills correlate with course success, to different degrees in different courses (Harwood et al., 2009). These findings replicate the general conclusion of work on the relations between STEM success and spatial skills (e.g., Shea et al., 2001) by demonstrating that the broad generalization holds for both introductory and upper-level geoscience courses, and that there is plenty of room for improvement even in upper-level courses.

While correlation does not imply causation, we think it likely that there is a causal relationship between spatial skills and success in geoscience because spatial visualization is required to understanding topics as diverse and fundamental as plate tectonics, mineral structure, sedimentation patterns, metamorphism, rock deformation, groundwater flow, the interior structure of the Earth, and much more. Yet these skills do not come easily to everyone; many students struggle with the penetrative thinking skills necessary to effectively reason about 3D spatial relations. In addition, prior studies have shown that poor spatial skills can be a barrier to learning geoscience (e.g. Rapp et al., 2007; Riggs and Balliet, 2009).

As spatial thinking skills are critical to geoscience learning, students who do not have these skills will struggle. In fact, it appears that students self-select to continue past introductory geoscience courses to upper-level courses, at least in part, on the basis of their spatial thinking skills (Harwood et al., 2009). Failure to promote learning to visualize penetrative relations will likely lead to gender inequities in the STEM pipeline. Previous work on mental rotation has found effect sizes for training that are considerably larger than the gender differential, meaning that gender differences can be removed with training (Terlecki et al., 2008). Training effects for penetrative thinking have not been well studied. We are aware of only one study that has reported training in visualizing slices through objects (Lord, 1985). Nevertheless, the extensive basic research on mental rotation and spatial learning offers solid grounding for developing materials to support teaching and student practice of penetrative thinking.

Kali, Y. and Orion, N. (1996). Spatial abilities of high-school students in the perception of geologic structures. Journal of Research in Science Teaching, 33, 369-391.

Kastens, K.A. and Ishikawa, T. (2006). Spatial thinking in the geosciences and cognitive sciences: A cross-disciplinary look at the intersection of the two fields. In C. A. Manduca and D. W. Mogk (Eds.), Earth and mind: How geologists think and learn about the Earth (pp. 53-76). Boulder, CO: Geological Society of America.

NRC (2006). Learning to Think Spatially—GIS as a Support System in the K-12 Curriculum. Washington DC: The National Academies Press. http://www.nap.edu/catalog.php?record_id=11019#toc