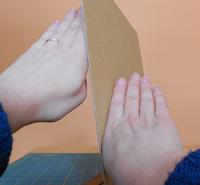 ×
Gesturing a layer offset by faulting. Photo by Carol Ormand.

Provenance: Carol Ormand, Carleton College
Reuse: This item is offered under a Creative Commons Attribution-NonCommercial-ShareAlike license http://creativecommons.org/licenses/by-nc-sa/3.0/ You may reuse this item for non-commercial purposes as long as you provide attribution and offer any derivative works under a similar license.
Students use gestures to explore the relationship between fault slip direction and fault separation by varying the geometry of faulted layers and the slip direction.

At the end of this exercise, students will:

This exercise accompanies a lecture on fault separation in an undergraduate structural geology course. Students need to know the difference between strike-slip and dip-slip faults prior to beginning the activity. This is one of several gesture exercises incorporated in the course, so students are accustomed to using gesture to describe and illustrate structural concepts.

Students explore the relationship between fault slip direction and fault separation by varying the geometry of faulted layers, slip direction, and the perspective from which these are viewed. They work in teams to explore these complex geometric relationships via gestures.

We walk around the room, watching and talking with the students as they work through the exercise. It's a quick and easy way to see whether students understand fault separation, and where they are struggling with this concept.