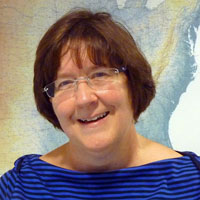 Provenance: Krista Herbstrith, Carleton College
Reuse: This item is offered under a Creative Commons Attribution-NonCommercial-ShareAlike license http://creativecommons.org/licenses/by-nc-sa/3.0/ You may reuse this item for non-commercial purposes as long as you provide attribution and offer any derivative works under a similar license.
The National Association of Geoscience Teachers and On The Cutting Edge is proud to congratulate R. Heather Macdonald on receiving the 2014 American Geophysical Union award for Excellence in Geophysical Education.

Dr. Macdonald's efforts with NAGT and On the Cutting Edge are extensive. Dr. Macdonald was elected to the NAGT executive committee in 1991 as a councilor and again in 1994 as second vice president rising through the offices to president in 1996. During her tenure on the board, she was engaged in building interest in education at Geologic Society of America (GSA) with symposia, sessions, and more. She has been the overall leader of the On the Cutting Edge project for the past 12 years, established the early career workshop program, and is currently a member of the committee spearheading the transfer of that project to NAGT. Dr. Macdonald has been a strong advocate for women's issues and was integral to establishing the NAGT two-year college division (Geo2YC).

NAGT/On The Cutting Edge congratulates Dr. Macdonald on this well deserved recognition of her commitment to geophysical education.

Dr. Macdonald will be recognized during the Honors Tribute at the 2014 AGU Fall Meeting, which will take place on Wednesday, 17 December 2014 in San Francisco.