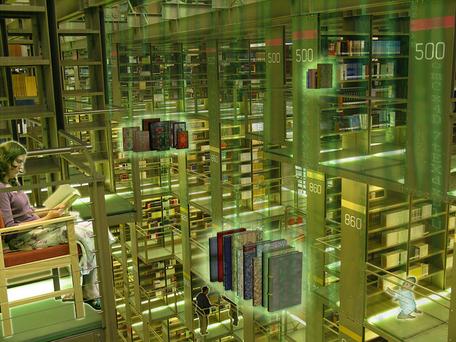 ×
NSDL was conceived at a time when both the promise and the shortcomings of the World Wide Web for education were apparent. NSDL was rooted in the notion that values added by libraries were critically important to realizing the potential of the Web and addressing its shortcomings. The library metaphor allowed the NSDL community to achieve a level of agreement that helped catalyze the NSDL collaborative initiative. However, the term "library" is overloaded with meanings that have become both assets and liabilities. Comparison to a library, with its traditional role as selector and purveyor of published information, can perpetuate the view of library as distribution channel, perhaps overlooking or underestimating its place and potential in supporting users in the creation of new resources.

Metaphors are powerful mental models that help us make meaning of our world. Our use of metaphors is sometimes purposeful and sometimes almost accidental (Lakoff, 1980). Since virtual organizations such as digital libraries are difficult to visualize, employing the metaphor of a library was helpful to explain the ideas behind it (Gazendam, 1999). This metaphor became a driving concept that helped NSDL achieve the level of agreement necessary to initiate the NSDL collaborative.

As with many metaphors, however, the many interpretations of "library" became both assets and liabilities. In this essay, we explore how the metaphor worked and did not work and how it fared during the various phases of this long-term project. The NSDL community held multiple definitions, often conflicting, of what a "digital library" was or should be. Some participants used the term strictly metaphorically, while others tried to build a digital representation of a more physical or "bricks and mortar" structure. (For more information, see Endnote 1: Evolution of the National Science Digital Library as a Metaphor.)1

The Library Metaphor as an Asset

A library is a multi-faceted endeavor that adds value to the items in its collections. Vartan Gregorian, President of the Carnegie Corporation, in its 1998 Annual Report, articulated the grand tradition of what a library could embody:

A living institution, libraries contain the heritage of humanity: the record of its triumphs and failures, its intellectual, scientific, and artistic achievements, and its collective memory.... They provide tools for learning, understanding, and progress. They are the wellspring of action, a laboratory of human aspiration, a window to the future...they are a medium of progress, autonomy, empowerment, independence, and self-determination...the symbol of our universal community, of the unity of all knowledge, of the commonwealth of learning.... It represents and embodies the spirit of humanity in all ages (p. 9).

NSDL was conceived at a time when both the promise and the shortcomings of the World Wide Web for education were becoming apparent. Many in the NSDL community were taken by the notion that the values of traditional libraries could be critically important both to realizing the potential of the Web and to addressing its shortcomings. These aspects of libraries informed the initial design of NSDL and eventually resulted in policies to support critical digital library functions. (For more information, see Endnote 2: More about Library Metaphors)2

The Library Metaphor as a Liability

For all its value in creating enthusiasm and painting a broad picture of NSDL potential, significant problems arose from the use of the library metaphor in creating a focused, coherent vision for the effort. These problems are outlined in the following subsections.

Metaphors can have somewhat plastic understandings, making the communication of vision, mission, audience, and expectations for experiences difficult at best. This diversity may stem from an individual's personal interactions with a library or its services, or conversely, from no personal experience at all, with both situations leading to the perpetuation of differing interpretations. The metaphor may be insufficient to create a congruent vision in the minds of all users or developers.

Because the utility of any metaphor depends on a shared understanding of its meaning, we must consider the case where the metaphor "library" does not conjure up a mental model of any kind. This possibility seemed unlikely at the onset of NSDL. However, in today's world, the widespread use of mobile technologies, the ubiquity of accessible information resources, and the emergence of generations that may never enter a physical library raise the possibility that the word "library" in the future may reference some untethered device rather than a building and its associated services.

Comparison to a library, with its traditional role as selector and purveyor of published information, can perpetuate the view of library as distribution channel, perhaps overlooking or underestimating its place and potential in supporting users in the creation of new resources.

The use of a metaphor can also lead to misconceptions about or lowered receptiveness to new ways of performing key functions. In the case of libraries, misconceptions and resistance include the following examples:

1Evolution of the of National Science Digital Library as a Metaphor

The initial vision of what was to become NSDL grew, in part, from the comprehensive review of the state of undergraduate STEM education, Shaping the Future, New Expectations for Undergraduate Education in Science, Mathematics, Engineering, and Technology (NSF 96-139) . This report called for a digital clearinghouse to organize, validate, and disseminate the instructional resources produced through the NSF's Course and Curriculum Development Program (CCD), Instrumentation and Library Improvement Program (ILI), and later Course, Curriculum, and Laboratory Improvement (CCLI) projects funded by the Division of Undergraduate Education.

Subsequent advisory reports reviewed the potential of information technology to transform STEM education and emphasized the role of instructional technology in supporting "access to world-wide resources, accumulation and presentation of data, and enabling communication, interaction, and collaboration among students and instructors to improve the practice of teaching and the experience of learning" (NSF 98-182).

The original outlines for a [link http://www.dlib.org/smete/ 'SMETE Library' new] (Fortenberry, 1998) were presented in two reports:

The concept of a digital library emerged from this discussion because it seemed to capture the need to share resources widely with a community, effectively organize resources, and support users with a strong set of library services. Early discussions added the notion of library as community center—the "intellectual commons" of a discipline—that integrates collections, services, and people in support of excellence in STEM education (Manduca and Mogk, 2000).

The technical advances that motivated the creation of NSDL were also rooted in the emerging world of digital libraries as much as in that of the Web in general. The concept of a central information or knowledge store had been explored previously by visionaries such as Vannevar Bush (1945) and J.C.R. Licklider (1965). The bringing together of technical advances with the needs of the educational community were highlighted in two important guiding principles in an essay by Dr. Christine Borgman, "Social Aspects of Digital Libraries" (1996):

Thus, the concepts of what constitutes a library were deeply embedded into NSDL from the beginning. This approach required careful coordination of diverse educational needs and expectations with the technology that could make this vision a reality. The foundational document, Pathways to Progress (2000), provided an ambitious direction for NSDL:

The National Science, Mathematics, Engineering, and Technology (SMET) Education Digital Library (NSDL) was conceived and is being constructed to support excellence in SMET education for all Americans. The NSDL will be a comprehensive information system built as a distributed network and will develop and make accessible collections of high-quality resources for instruction at all levels and in all educational settings. It will also establish and maintain communication networks to facilitate interactions and collaborations among all SMET educators and learners, and will foster development of new communities of learners in SMET education. Multiple services will be available to help users effectively access and use NSDL resources.

Libraries can be associated with many metaphors, including the following examples: