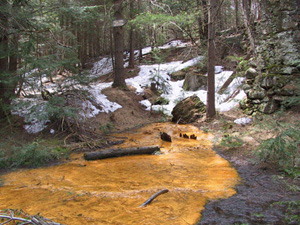 Hide
Davis Mine was originally used to extract pyrites. The waters of the emerging stream are acidic and rich in iron compounds which are then exploited by various bacteria that produce oxidized iron compounds with the typical orange/brown colour. Details

The world that we are familiar with is full of oxygen, never too cold nor too hot (most of the visible organisms live in a relatively limited range of temperatures from 5°C to 40°C), and we are protected by our atmosphere from most damaging radiation. This familiar world defines what we think of as normal, and the organisms that live at the edges of this world or beyond it are the 'extremophiles.'

Interestly, most extremophiles are microbes and they may live in places that we might think should be uninhabitable. Such places include the very deep oceans which are very cold, very dark with no light to support photosynthesis, and under incredible pressure. Or perhaps they can be found in bubbling cauldrons of acidic waters of Yellowstone National Park. Microbial life began probably about 3 billion years ago, and the first evolutionary steps began in a world without oxygen, with a different atmosphere unable to provide protection from ultraviolet radiation, and with water bodies which were hot and acidic. It was a physiologically challenging world, but one in which the microbes survived and succeeded, and through their success they began to change the world - adding oxygen to the atmosphere and changing the micro-environments into places that are less stressed. 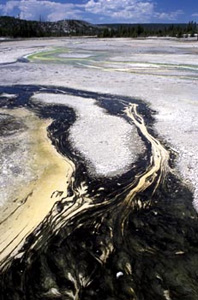 Hide
A dramatic pattern of colors in Porcelain Basin is formed by different communities of microbes living along a striking temperature gradient. Details

The extremes still exist out there, often still dominated by the microbial communities. The study of these environments and the organisms that live there has considerable value for us. The anoxic world (including the sulfur-dominated thiobios) is arguably the most extensive habitat in the world, at best only the very top layers of sediments and soils are rich in oxygen, the remainder is anoxic. From here, whether rice paddies or mangrove swamps, comes methane one of the most potent greenhouse gases. As we exhaust those parts of familiar biology that are easily knowable, we move increasingly into the less familiar worlds. This area of study is proving to be valuable and rewarding for many reasons. The study of extremophiles challenges our concept of the limits of life. We make discoveries, such as the enzymes of the temperature tolerant bacterium Thermus aquaticus, that have made molecular biology into the powerful tool that pervades almost all of biology. The study of extremophiles informs our quest for the comprehensive tree of life and helps us to understand how evolution has taken place. Astrobiology pays very close attention to life at the extremes for many reasons. If Life is to be found away from Earth, it will most likely be in places and of a form that we are not familiar with. The early planet was an extreme habitat, and we expect this to be true of other planets on which life is developing.

Take a Closer Look at Extremophiles and their Environments

Who Are the Extremophiles? introduces extremophile terminology and features resource collections for each of the major groups of microbial extremophiles.

Extreme Environments defines the various types of extreme environments, offers collections for each environment, and highlights specific habitats of interest.