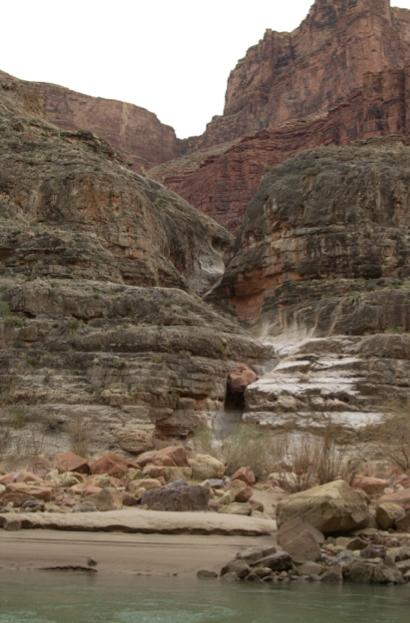 Provenance: Jon Pelletier, University of Arizona
Reuse: This item is offered under a Creative Commons Attribution-NonCommercial-ShareAlike license http://creativecommons.org/licenses/by-nc-sa/3.0/ You may reuse this item for non-commercial purposes as long as you provide attribution and offer any derivative works under a similar license.

The development of the Grand Canyon involves three main sets of processes. First, bedrock exposed on the steep hillslopes adjacent to the Colorado River and its tributaries are broken down by weathering processes operating near the surface (such as frost cracking and the expansion of plant roots into joints and other small cracks). Second, weathered rock is transported down hillslopes and into channels by the direct action of gravity (mass movements) and the influence of gravity on water (overland flow) which generates shear stress. Third, fluvial channels of the Colorado River and its tributaries transport the sediment delivered to them downstream and further erode into the bedrock below by the processes of plucking and abrasion.

First and foremost, the formation of a canyon requires that relief be created. Relief is simply a difference in elevation. Relief is necessary because sediment transport processes all require a slope, which is just relief divided by horizontal distance. Most scientists believe that a steep-walled and deeply incised canyon began to form in response to relief production along the Grand Wash-Wheeler Fault system that demarcates the downstream end of Grand Canyon starting approximately 16 million years ago (Ma). However, this was well before the arrival of the Colorado River into the Grand Wash trough. Between about 16 and 6 Ma, a canyon was forming slowly, driven by a relatively small river draining a local area. At that time, the Colorado River was flowing elsewhere (we still don't know where due to the lack of preserved Colorado River deposits older than 4.4 Ma). We do know that the Colorado River started flowing over the "step" or elevated section created by the Grand Wash-Wheeler Fault system between 5 and 6 Ma. At that time, the erosion that formed the Grand Canyon really accelerated. Relief can be produced either by the uplift of rocks on one side of a fault or the subsidence of rocks on the other side. We do not know for certain whether the relief produced along the Grand Wash Fault was created by uplift of the Colorado Plateau or the subsidence of the adjacent Grand Wash Trough.

You can set three parameters in the model. These are the rock erodibility factor, the hard/soft contrast factor, and the cliff retreat rate. Also, you can change how many storage intervals you would like and how long the simulation runs. The model begins at 6 Ma which is close to the time when the Colorado River began flowing along its present course.

Provenance: WILSIM project
Reuse: This item is offered under a Creative Commons Attribution-NonCommercial-ShareAlike license http://creativecommons.org/licenses/by-nc-sa/3.0/ You may reuse this item for non-commercial purposes as long as you provide attribution and offer any derivative works under a similar license.

The cliff retreat rate determines the speed or pace at which cliffs wear back laterally. The cliffs adjacent to Grand Canyon wear back in a slope-retreat style. That is, they maintain a near-vertical form as the wear back. Slope retreat is a common style of hillslope evolution in weathering-limited environments (those where weathered rock is transported off of hillslope almost as fast as it is weathered into transportable material). Weathering-limited conditions tend to occur in relatively arid climates such as that of the southwestern United States. Cole and Mayer (1982) used fossil packrat middens to measure the rate at which the most resistant rocks (those of the Redwall limestone) wear back by retreat. They obtained a value of approximately 0.5 m kyr-1, but you can increase or decrease this value to see how having rocks more or less resistant to weathering would affect the shape of the canyon.

The rock erodibility factor controls the rate of erosion into the weaker rocks by fluvial channels (the Colorado River and its tributaries). A rock erodibility factor of 0.1 kyr-1 generates erosion at a rate equal to 0.1 m kyr-1 for a fluvial channel of slope equal to 1 (45°) and drainage area equal to 1 km2. In WILSIM-GC, channels with larger contributing area and/or steeper channels have higher erosion rates, while those with smaller contributing area and/or lower slopes have lower erosion rates.

The hard/soft contrast is a dimensionless number that controls the relative erosion rate between strong and weak rocks for the same size channel. The rocks that are the most resistant to fluvial erosion in the Grand Canyon sequence are the limestones (Kaibab, Redwall, and Muav). This can be deduced from the fact that fluvial channels steepen significantly when they encounter those rock types. The clastic sedimentary rocks are more fractured and thinly bedded and hence require less power river flows to pluck bedrock from the channel bed. The actual sequence of rock strata represented in the model is a simplified version of the stratigraphy present in the Grand Canyon. The sequence represented in the model has a strong layer located 400 m below the canyon rim, representing the Redwall limestone. The greater resistance of the Redwall limestone relative to rocks above and below it results in the largest single "step" in the cross sectional shape of the Grand Canyon.

The origin of the Grand Canyon and the relief that triggered incision are still subjects of active debate. New ideas abound, such as the possibility that the Grand Canyon was formed by a river flowing from west to east rather than from east to west. Also, rocks from western and central Grand Canyon indicate that they have been relatively close to the surface (e.g. within approximately 2 km) for a very long time (c. 70 Ma). Whether this means that the Grand Canyon is much older or that a canyon similar in shape to the Grand Canyon existed higher in the stratigraphy (i.e. above the level of the Kaibab limestone) is uncertain. A list of scientific papers are provided below that delve into the process models used in WILSIM-GC and that explore these active scientific debates.

Provenance: National Park Service
Reuse: This item is in the public domain and maybe reused freely without restriction.