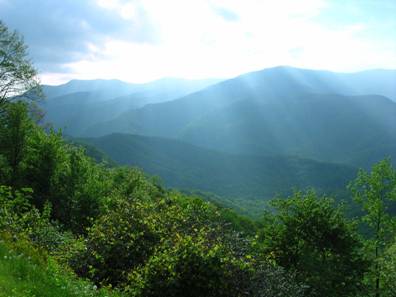 ×
Temperate forest
Biomes are large geographic areas that contain distinctive plant and animal communities. Biomes may be composed of multiple ecosystems, and the primary factors which distinguish different biomes are temperature and precipitation. A biome's temperature and precipitation regime influence soil temperature and soil moisture conditions, as well as the soil type, and are responsible for the presence of distinctive vegetation types in each biome. Major biome types include forests, grasslands, tundra, deserts, shrublands, and wetlands.

Biomes are large geographic areas that contain distinctive plant and animal communities. Biomes may be composed of multiple ecosystems, and the primary factors which distinguish different biomes are temperature and precipitation. A biome's temperature and precipitation regime influence soil temperature and soil moisture conditions, as well as the soil type, and are responsible for the presence of distinctive vegetation types in each biome. Major biome types include forests, grasslands, tundra, deserts, shrublands, and wetlands. Each of these biomes has distinctive soil types, which are discussed below. 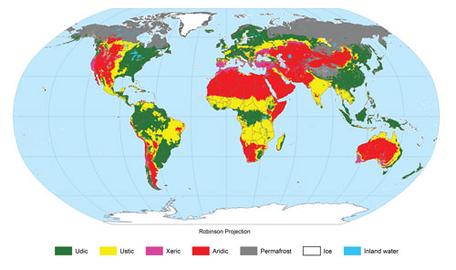 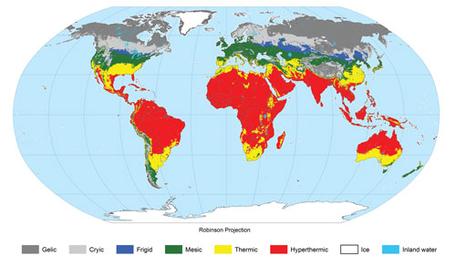 Forests cover 30% of the Earth's land surface and are the most diverse and complex ecological systems. There are several types of forest biomes- tropical rainforests, temperate rainforests, temperate forest, coniferous/boreal forest (taiga). Tropical rainforests (Know Soil, Know Life Figure 7-5) are characterized by warm temperatures and high rainfall and are primarily found in equatorial regions. Vegetation in these regions is lush, with large trees and dense vegetation on the ground surface. However, due to high amounts of rainfall and fast uptake of nutrients from decomposing organic matter by plants, the soils in the tropical rainforest are generally nutrient-poor and non-fertile. The primary soil orders found in tropical rainforests are Oxisols and Ultisols, which are soils rich in iron and aluminum oxides (red color) but with low natural fertility. 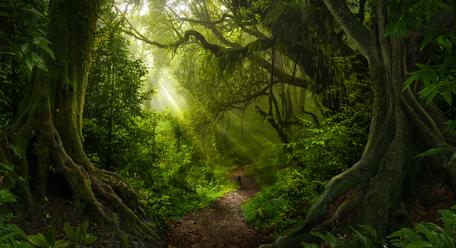 Temperate deciduous forests generally receive more than 100 cm of rain per year and are characterized by a dormant season during which the trees shed their leaves. Temperate deciduous forests primarily occur in areas with glacial till, loess, eolian, residuum, and alluvium parent materials. In northern regions, these forests often have younger Alfisol and Inceptisol soils, while in warmer, southern regions, these forests generally have more highly developed Ultisols or Spodosols. Coniferous or boreal forests (also known as taiga) are found just south of the arctic tundra and are evergreen. These forests are dominated by Spodosols where the parent material is sandy, and by Inceptisols and Entisols when other parent materials are present. These soils are generally acidified as needles from evergreen trees decompose and release organic acids into the soil. In general, taiga soils are acidic and sandy and have low nutrient contents.

There are two major types of grassland biomes- tropical savannah and temperate grasslands. Tropical savannahs are characterized by tall grasses mixed with sparse trees and shrubs, and are found in areas with alternating dry and rainy seasons. These landscapes are often found in highly weathered regions, and as such, soils in these areas include Alfisols, Ultisols, and occasionally Oxisols. These soils are generally low in fertility due to the fast decomposition of organic material and leaching of nutrients over time.

Some of the most productive soils in the world are located in temperate grasslands (Figure 7-13), nearly half of which have been converted to croplands or other land uses. The dominant soil type of this biome is the Mollisol, a well-developed, highly fertile soil with a dark, thick A horizon created by the buildup of organic matter. The amount of organic matter in the soil is dependent upon the type of vegetation, which varies according to rainfall availability. Areas with less rainfall generally have shorter grasses and less soil organic matter, while areas of high precipitation generally have tall grasses and high soil organic matter contents (Figure 7-14). 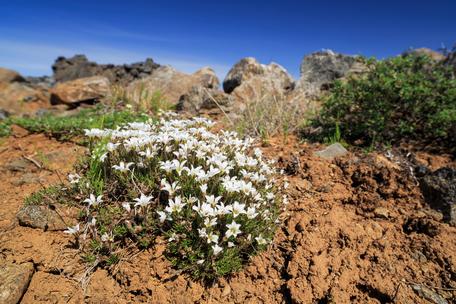 ×
tundra and flowers
Arctic tundra is the northernmost biome on Earth, and is characterized by permafrost, soil that is constantly frozen; strong winds; a short growing season, and shallow soils. The typic soil of this biome is the Gelisol, which is characterized by the presence of permafrost within 1.0 m of the soil surface. These soils are young and have little horizonation due to low temperatures and slow decomposition. Partially decomposed organic matter is stored in these soils, leading them to be a large sink of carbon. If the soil is not frozen, Histosols often form. Alpine tundra biomes are located at high elevations, where soil freeze and thaw are influenced by daily temperature fluctuations rather than by the seasonal-scale temperature changes observed in the arctic tundra. Soil in the alpine tundra are generally young due to the low temperatures, with the exception of Spodosols and Andisols, whose parent materials (Andisols) and organic acids (Spodosols) may lead to greater levels of soil formation.

The dominant characteristic of desert biomes is a lack of precipitation. Deserts can be either hot or cold (Figure 7-22), and often support plants and animals that are specialized to survive in their extreme environments. Deserts cover approximately 19% of the Earth's land surface, and occur in aridic moisture regimes (Figure 7-4). Because of low rainfall levels, soils in deserts are primarily Aridisols, soils which are generally not well-formed and which contain accumulations of clay, carbonates, gypsum, and/or sodium and clay. Other soils may be Entisols, slightly more developed soils which may have some horizonation formed under previous climates.

Shrublands cover 5% of the Earth, and are generally found in transition zones between deserts and other biome types. These areas are dominated by evergreen, fire tolerant shrubs, with interspersed grasses in between. Mollisols and Alfisols are the dominant soil orders found in shrublands, similar to grasslands.

There are two types of wetlands- freshwater wetlands and marine wetlands. These biomes occur where fresh water bodies, such as rivers and streams, meet salt water bodies such as the ocean. Freshwater wetlands have less than 1% salt content, while salt water bodies have higher salt contents. The dominant soil order in all wetlands is Histosols, which are characterized by high levels of organic matter accumulation (Figure 7-30). Because the soils in these biomes are hydric (submerged underwater for significant periods of time), there is little to no air exchange between the soils and the atmosphere. This leads to anaerobic conditions where the soil particles become reduced (Figure 7-29), and limits the formation of distinct soil horizons.