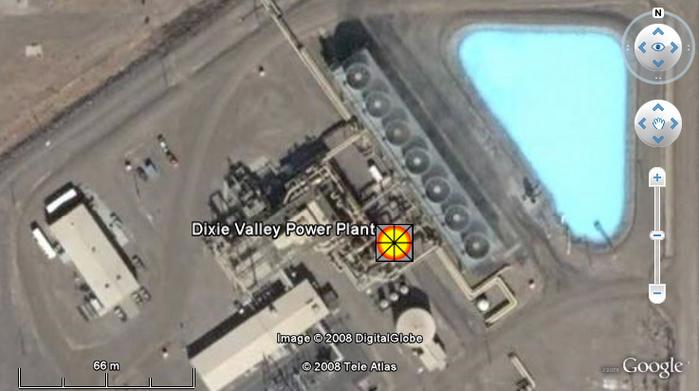 In order for students and educators to use Google Earth effectively, they need to learn the basic functions of the user interface. The Student Google Earth User Guide is designed to help users become familiar with Google Earth's most commonly used functions and offers links to more detailed information. The Google Earth Pro - Tip Sheet (Acrobat (PDF) 5.5MB Aug1 18) is a one-page summary of some of the most frequently used Google Earth functions. Google Earth offers a great deal of data in its layers that can be used for educational purposes. For example, it includes a wide variety of items with in the "Primary Database" that range from National Geographic and NASA resources to the location national parks. Also included is a terrain layer that can be activated in order to visualize the landscape in three-dimensional relief for any part of the world. Image overlays of maps can also be draped over the terrain. This is especially effective for displaying the relationship of contours on a topographic map to the landscape.

In addition, a great deal of third-party data is available on the web that can be displayed in the 3D Viewer. If you are looking for a particular type of data, try searching for the topic and "Google Earth". Many geosciences examples are at Good Places to Get Data for Educational Use. The primary resources that Google provides are Google Earth Education and Google Earth Help Community. There are some Google Earth training modules to train teachers and organizations to create virtual field trips using Google Earth.

For many years there were also open community forums Google Earth. However, those have been discontinued.

Google Earth and its server are periodically upgraded to add new layers and capabilities. In addition to the forums, there are various blogs that can keep you informed about new developments. These include Frank Taylor's Google Earth Blog. Google Earth Lessons offers information on how to user the Google Earth interface and a great deal of ideas, content, and teaching material that can be used in the classroom. In addition to using existing data, students and educator can create their own data to be mapped in the 3D Viewer. This data can be in the form of points (known as Placemarks), paths, which are segmented lines, polygons, overlays of maps, photographs, and three-dimensional models. The Student Google Earth User Guide includes information on how to create new data.

This short book describes what Google Earth does and mentions recent versions and their capabilities. Various things users can do with Google Earth are also discussed.

Google Earth and Virtual Visualizations in Geoscience Education and Research

This is a publication by the Geological Society of America that presents innovations brought by Google Earth into the geoscience classroom. From its use for remote geologic mapping to integration with high-resolution photography collected in the field for virtual field experiences, this resource delves into various applications of Google Earth for teaching, and concludes with a section on educational models, methods, and assessment.

This book explains the use of Google Earth tools and teaches the reader to look at the Earth from a geographic perspective. Recognizing volcanoes, mines, islands, and glaciers is discussed here, as well as historical routes, map overlays, 3D buildings, and images from the past to explain current phenomena. This book includes easy-to-follow steps for an interactive experience.

This book primarily covers Google Maps, the details of the using Google Maps API by creating JavaScript code, reading and handling data from XML files, working with databases, serving data over the web, and working with overlays. The last several chapters are devoted to Google Earth. This includes a discussion of differences between Google Earth and Google Maps, some of the layers, creating and sharing placemarks, basic KML principles, using Perl to generate KML, creating overlays, and creating 3D models. Since it was written in 2006, it is a bit outdated, but still contains a great deal of useful information and ideas.

The KML Handbook offers an introduction to KML, and a great deal of advanced material about the details of the language, and how to use it to create a great variety of different types of content. Along with descriptive text, code examples and illustrations are used throughout the book to demonstrate how to create placemarks, paths, polygons, overlays, and 3D models. Also included are discussions on how to design attractive and informative information balloons, work with photographs, create icons, offer data through network links, serve data with Python scripts, and use time and animations. The book also includes a complete KML reference.

Beginning with simple examples of how to use the standard Google Maps service, and proceeding to discussions of the Google Maps API accompanied by code and illustrations, this book demonstrates many uses for Google Maps. Introductory material includes navigating the map, changing map views, searching for places and getting directions, and sharing maps through urls. The more advanced focus on the API includes working with markers, routes, information balloons, geotagging photographs, server side scripts, mashups with third party data, working with XML data, and databases. One chapter discusses tracking incoming GPS data with Google Earth. This book uses version 1 of the Google Maps API, so it is somewhat out of date, but still offers a great deal of useful information.
Published: 2008

Future of Google Earth is a story about the adventure of exploring the world with Google Earth. It places considerably more focus on facts about places than on technical aspects of Google Earth. It includes information on some features that can be seen in Sky mode. In addition, other Google services are briefly discussed, including the search engine, Google Maps, and Gmail.

These two books present, with examples that include code and illustrations, the fundamentals of the Google Maps API. Many of the examples involve server side scripting with either PHP or Ruby.

This book covers creating mashups with the Google Maps API