The part of Earth any alien visitor to our planet will first encounter is the atmosphere. This thin veil of gas extends only a few hundred kilometers above the surface. If Earth were the size of a basketball, 98% of its atmosphere could be represented by the thickness of 2 sheets of paper. Earth's atmosphere is remarkable for it's concentration of the highly reactive gas oxygen, a product of the biosphere which it supports. High altitude ozone in the atmosphere mediates the impact of solar radiation by absorbing high energy ultraviolet light, protecting sensitive plants and animals on the surface. The atmosphere helps to distribute incoming solar energy and enables the greenhouse effect which warms the Earth to a habitable 300K (26 degrees C) on average.

The earliest atmosphere, some 4.5 billion years ago, reflected the solar abundance of volatiles such as hydrogen and helium, which quickly escaped into space leaving carbon dioxide and water with no free oxygen. Early atmospheric evolution was driven by carbon dioxide dissolving in the ocean and chemical reactions caused by rock weathering, solar radiation and lightning. Earth was sterile, and with no free oxygen, there could have been little ozone in the stratosphere to shield the surface from intense solar ultraviolet radiation. Yet early life took hold in the oceans of this inhospitable world, and over the course of a billion years evolved from single celled anaerobic organisms to more complex blue-green algae that produced oxygen as a byproduct of life through photosynthesis. By one billion years ago enough oxygen was being produced to begin to form a stratospheric ozone layer that would protect the surface from harmful solar radiation, and enable life to extend from the protection of the ocean to dry land. Aerobic organisms emerged that consumed oxygen, and eventually produced carbon dioxide to sustain green plants. A synergistic steady state cycle of oxygen production and carbon dioxide consumption was initiated that continues today. The chemistry of the air we breathe is fundamentally linked to the living biosphere the atmosphere sustains.

The atmosphere is an ocean of air held in place by gravity, extending from the surface to an altitude of hundreds of kilometers, the edge of space. Energy from the sun heating the air and land surface to different degrees, drives atmospheric circulation. Patterns of circulation are also influenced by Earth's rotation, latitude and the distribution of land, ocean and ice. Vast quantities of energy and matter are moved around the planet by the circulating atmosphere, which also enables the hydrologic cycle of evaporation, condensation and precipitation.

Above the troposphere is the stratosphere, home to 90% of the atmospheric ozone that absorbs incoming ultraviolet energy. Manmade chemicals (CFCs) have reached the stratosphere and altered the natural balance of ozone creation and destruction, causing seasonal destruction of ozone, especially in the polar regions. Production of these chemicals has abated, but their long lasting destructive effects as ozone-destroying catalysts remain. 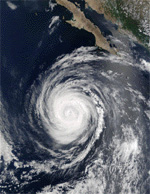 The atmosphere is the critical element controlling Earth's global energy balance. Relatively small quantities of "trace gases" such as carbon dioxide and methane play an important role in trapping heat in the atmosphere and elevating the overall surface temperature. Water vapor is the other critical atmospheric component governing global temperature. A powerful greenhouse gas itself, water vapor also condenses to form clouds which in turn can reflect solar energy into space (high clouds) or trap heat at the surface (low clouds). 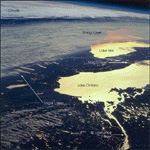 The release of carbon dioxide through burning of fossil fuels has increased significantly in historic times, leading to an enhanced greenhouse effect that is warming the planet. In addtion, the by products of hydrocarbon combustion enter the air we breathe, posing health hazards and potentially affecting climate by changing the radiation balance of the atmosphere by absorbing or reflecting incoming solar energy.