The Modern Synthesis: A Historical Approach

This lecture outline does not address creationism directly, but deals with the complaint that evolution is "just a theory". What is a theory? Does disagreement within the scientific community weaken evolutionary theory?

Every theory in mainstream science has been rigorously tested (otherwise they aren't called theories) and almost none of them strongly resemble the hypotheses that gave birth to them. 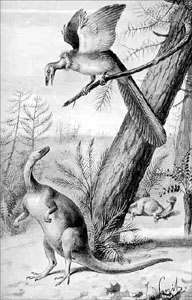 Resources for Teaching about the Development of the Modern Synthesis