David Steer and Kyle Gray, University of Akron
This material is based upon work supported by the National Science Foundation under Grant No. GEO-0506518. 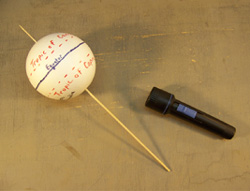 While working in groups to facilitate peer tutoring, students manipulate a hands-on, physical model to better comprehend the Earth's position in space, the Earth's rotation axis and seasons. Students use the model to observe changes in insolation between the equator and poles, and explore the relationship between axial tilt and seasonal changes.
Used this activity? Share your experiences and modifications

This model works best during units on Earth's place in the solar system or weather and climate as a tool for engaging student inquiry. Student manipulation of the model requires more than one person, thus it works best when students are grouped together.

Each student model consists of the following materials: A larger instructor's demonstration model can be used to illustrate the proper orientation of the model and highlight key observations. It consists of"


During the lecture, have the student groups work through each of the following tasks. After groups have completed a task, demonstrate the correct answer using the instructor's demonstration model.

When manipulating this model, the students may encounter the following problems:

Several different assessment techniques can be used depending on time and the needs of your class.