The Colorado River flows almost 1500 km from its headwaters in Wyoming, Colorado, Utah and New Mexico, through Nevada, Arizona, and California, before crossing the border to Mexico and flowing to the Gulf of California. It is the lifeblood of the American Southwest, serving almost 30 million people and enabling cities, industry, and irrigation-based agriculture to thrive in one of the direst climates on Earth (see Figure 1 in Module 8.2). The river also provides hydroelectric power that spurred much of the 20th century development of the Southwestern U.S.

In 1922, these seven western states and the federal government negotiated an agreement, the Colorado River Compact (Figure 15) to allocate water rights on the river. First and foremost the compact partitioned water between Utah, New Mexico, Wyoming, and Colorado (the Upper Basin States) where most of its discharge originates as snowmelt); and Arizona, Nevada, and California (the Lower Basin States), where population growth and water demand were increasing rapidly (Figure 16).

The compact was borne in part out of the Upper Basin States' unease that water projects and use of the river (e.g., by construction of the planned Hoover Dam) by Lower Basin States at the time would, if interpreted through the lens of the doctrine of prior appropriations, impact their future claims to water from the river. The compact specifies that the Upper and Lower Basin would each have the rights to 7.5 million acre-feet of water per year. To accomplish this while recognizing that not all years would be the same, the delivery of 7.5 million acre-feet per year to the Lower Basin is evaluated based on a ten year running average (i.e. the Upper Basin must deliver 75,000,000 acre-feet for any span of ten consecutive years). In fact, the primary purpose of Glen Canyon Dam, unlike Hoover Dam, which generates hydroelectric power and serves as the distributary dam for the Lower Basin States, is to serve as a large "capacitor" in the river system to help ensure that this agreement can be met. Later amendments to the agreement included the 1928 Boulder Canyon Project Act, the 1944 Mexican Water Treaty, and 1948 Upper Basin Compact. In combination, these amendments spelled out the allocation of water between the individual states, and also allocated 1.5 million acre feet for Mexico (Table 1).

Of course, the specification of an absolute amount of water to each of the states and Mexico has raised a few serious problems that remain contentious. First, the river is over-allocated. The 1920's – coincidentally the time that the Compact was negotiated was an anomalously wet period with annual flows as high as ~20 million acre-feet (Figures17-18). In contrast, the long-term mean discharge of the river is about 15 million acre-feet, yet 16.5 million are allocated. Furthermore, the river flow is highly variable, and based on historical data and tree ring reconstructions, it seems that decades-long dry periods with flows less than 13-14 million acre-feet may be common. Second, climate projections indicate that the region will become drier in the long-term, and some have suggested that we have already entered an era of steadily declining river flows along the Colorado. Fourth, improved understanding and renewed interest in the environmental impact of decades of dramatically reduced flow have spurred new pressures to allocate some discharge for the natural system. Finally, demand is likely to increase as populations in the region continue to grow, further stressing the already over-allocated river (Figure 18). 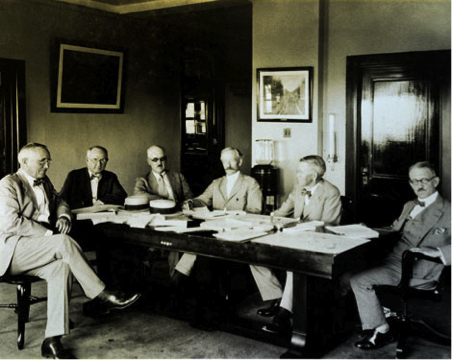 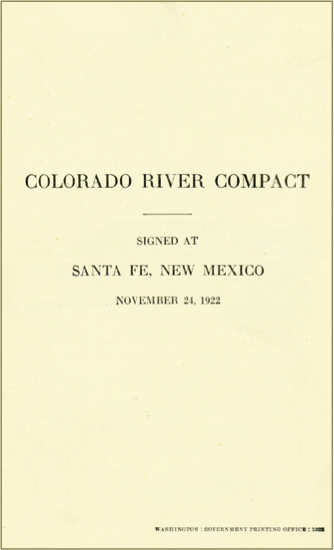 ×
Figure 15. (left) Signing of the Colorado Rover Compact in 1992, with Herbert Hoover, the Secretary of Commerce at the time, serving as the chairman. (right) Cover page of the original Compact.
Sources: Left: U.S. Bureau of Reclamation.Right: National Archives and Records Administration 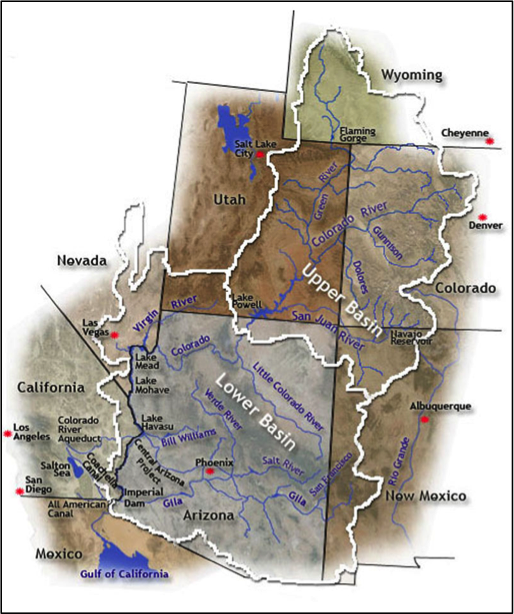 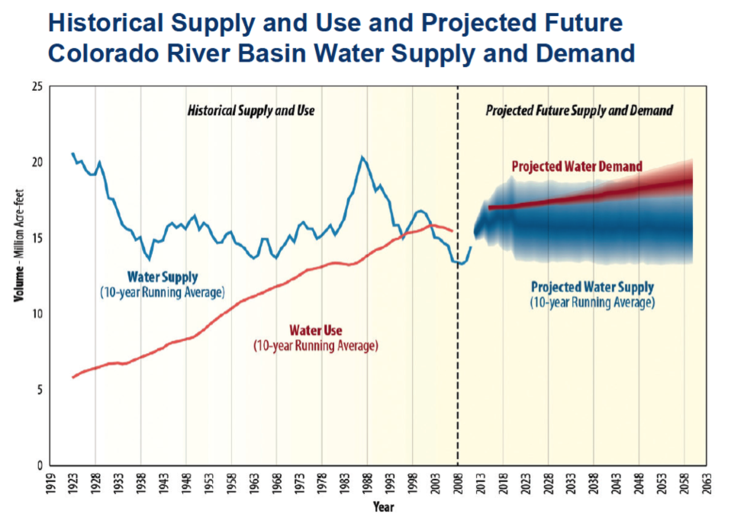 ×
Figure 18. Historical and projected water use and demand along the Colorado River.
Source: U.S. Bureau of Reclamation Colorado River Factsheet.