These student materials complement the Humans' Dependence on Earth's Mineral Resources Instructor Materials. If you would like your students to have access to the student materials, we suggest you either point them at the Student Version which omits the framing pages with information designed for faculty (and this box). Or you can download these pages in several formats that you can include in your course website or local Learning Managment System. Learn more about using, modifying, and sharing InTeGrate teaching materials.

Phosphorus is not one of the most common elements in Earth's crust and mantle, yet it is essential for all life, plant and animal. Phosphorus makes up our bones and teeth, and importantly, phosphorus composes DNA.

Even though plants require more nitrogen and oxygen than they do phosphorus, phosphorus is often the limiting nutrient; the amount of available phosphorus determines the amount of plant growth and development. Where phosphorus is plentiful, plants thrive, and vice versa. However, plants cannot absorb limitless amounts of phosphorus. Phosphorus not used by plants remains in the soil or runs off in streams and groundwater.

The diagram below shows the reservoirs of the phosphorus cycle (in boxes). The processes that move phosphorus from one place to another are in italics, and arrows show the direction in which phosphorus flows. 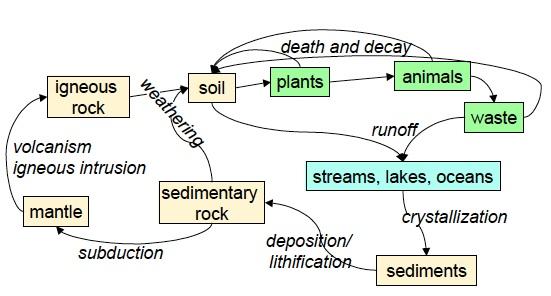 ×
Figure 1. The phosphorus cycle. Reservoirs are colored according to the sphere they inhabit: tan marks the geosphere, blue marks the hydrosphere and green marks the biosphere.

Provenance: Image by Joy Branlund, Southwestern Illinois College.
Reuse: This item is offered under a Creative Commons Attribution-NonCommercial-ShareAlike license http://creativecommons.org/licenses/by-nc-sa/3.0/ You may reuse this item for non-commercial purposes as long as you provide attribution and offer any derivative works under a similar license. 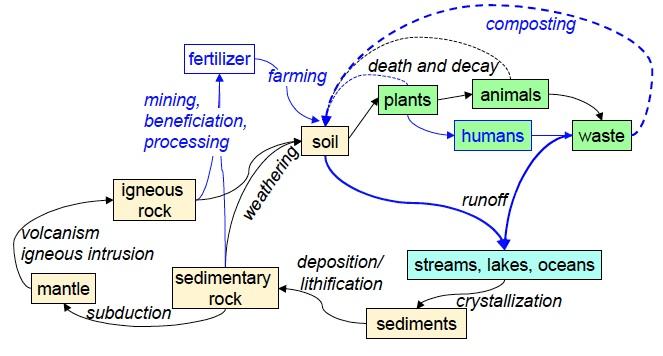 Provenance: Image by Joy Branlund, Southwestern Illinois College.
Reuse: This item is offered under a Creative Commons Attribution-NonCommercial-ShareAlike license http://creativecommons.org/licenses/by-nc-sa/3.0/ You may reuse this item for non-commercial purposes as long as you provide attribution and offer any derivative works under a similar license.

Phosphorus in rock is pretty insoluble and thus not directly available to plants. In nature, rock phosphate can become soluble (and available to plants) either by chemical weathering or through the actions of certain types of plants. The solubility also depends on the type of rock containing the phosphorus and the pH of the soil; phosphorus is most soluble when contained in sedimentary rocks as opposed to igneous rock, and when soil pH is between 5.5 and 7.2. Therefore, just spreading phosphate rock on fields has little effect on plant growth. However, in the mid-1800s, chemists discovered that mixing sulfuric acid with phosphate rock creates a soluble fine powder called superphosphate; this discovery turned phosphate rock into the valuable fertilizer it is today. A caveat, however, is that once fertilizer is applied to the soil, the phosphorus not absorbed by plants can adhere to soil or clay particles and become an insoluble solid once again.

True/ False. Phosphorus is one of the eight most common elements in Earth's crust.

True/ False. Because phosphorus is a main nutrient for plants and animals, it has no substitute.

Naturally, how does phosphorus end up in soil?

The Origin of Phosphate Deposits

Most phosphate reserves are from sedimentary rocks. The phosphate-rich sedimentary rock forms in the shallow oceans mainly due to bacterial activity, but only when several conditions are met. Their formation is pretty rare! For example, phosphates form only in warm, tropical oceans where there is a cold upwelling next to shore. There needs to be a source of phosphorus. Usually this is an abundance of dead organic matter. (There is a reason that Florida's phosphate region is also called the Bone Beds.) Bacteria feed off nutrients from the organic matter and the cold upwelling water and release the phosphorus element from the organic matter. Other bacteria crystallize mud-sized crystals of that phosphate. Finally, the right set of processes is needed to concentrate the phosphate into one layer. This can be a combination of physical processes (e.g., wave erosion) and biological processes (e.g., benthic organisms eating and then excreting phosphate pellets). It should be noted that the previous paragraph overly simplifies a complicated process that is not yet fully understood, in spite of being studied for more than one hundred years!

How Phosphate Is Mined and Processed

Sedimentary phosphate tends to be found in loose sediment, so it can be mined with dredge lines (or picks and shovels). In Florida, the phosphate is found mainly in one layer of clay and sand that's about 10--20 feet thick and 15--50 feet below the surface. After the heavy equipment digs out the overburden (the sediment above the desired layer), they remove and dump the phosphate-rich sediment into a pit. That sediment is mixed with pressurized water to make a slurry, and that slurry is sent through miles of pipeline. Making and pressurizing the slurry requires a lot of electricity (15 kwh per ton of phosphoric acid) as well as water. Many phosphate mines recycle their water, and in Florida, 95% of this water is reused.

The fast movement of the slurry causes it to bang against the pipes and this breaks apart any clay balls. What arrives at the beneficiation plant is a mixture of fine-grained sand, clay, and phosphate sediments suspended in water. At the beneficiation plant, the slurry is first run through a screen, which filters out the coarser sand. To separate the phosphate from the clay, different equipment causes the finer-grained particles to separate from the coarser grains. Finally, a process called flotation is used to separate the phosphate from smaller-grained sand. In this process, the phosphate and sand mixture is mixed with a hydrocarbon, but the hydrocarbon only sticks to the phosphate. When bubbles move through the liquid, the coated particles attach to the bubbles and rise to the surface. This can be done a second time, but using a different hydrocarbon to attach to the sand.

At this point, the sand, clay, and phosphate have been separated. The sand and overburden are used to help reclaim the land (fill mine pits). The clay is spread out over the land and left to dry. While it eventually does completely harden, the clay remains soggy for a long time. Even after 3--5 years a solid crust will exist on the clay, but underneath the clay will be soft and pudding-like (not ideal to build upon).

The phosphate is sent to a chemical processing plant, or fertilizer manufacturing plant. Here, molten sulfur, shipped to Florida ports and trucked to the plant, is used to create sulfuric acid. The sulfuric acid is then mixed with the phosphate to make phosphoric acid. The phosphoric acid is the main ingredient in fertilizer but can also be used in animal feed supplements, soda, or soap.

The mixing of sulfuric acid and phosphate creates gypsum (called phosphogypsum) as a byproduct. Although gypsum can be used for a variety of purposes, the EPA prevents usage of Florida's phosphogypsum because it retains the low levels of radioactivity found in the host sediments. At present, phosphogypsum is piled up around the processing plant making huge gypsum stacks. Wastewater is also produced. Much is reused, but some wastewater is pumped into ponds at the tops of gypsum stacks where water evaporates, leaving the waste products in the pile.

What processes form the majority of phosphate deposits?

What sorts of problems would you expect to exist from the mining process?