These student materials complement the Humans' Dependence on Earth's Mineral Resources Instructor Materials. If you would like your students to have access to the student materials, we suggest you either point them at the Student Version which omits the framing pages with information designed for faculty (and this box). Or you can download these pages in several formats that you can include in your course website or local Learning Managment System. Learn more about using, modifying, and sharing InTeGrate teaching materials.

A Segue into Mining

The primary ingredients in Li-ion batteries are lithium and cobalt. Both are considered critical materials, which the United States deems necessary for energy and/or defense but at risk of supply disruptions.

Half of the world's known reserves of lithium are found in an uplifted salt flat bordering Chile and Bolivia. In 2012, two of Chile's mines dominated world production. A lithium-bearing mineral, spodumene (LiAlSi2O6), can be mined from intrusive igneous rocks (introduced in this module's Unit 1 and reinforced in Unit 5), but lithium minerals (lithium carbonates and lithium chlorides) that crystallize from brines (very salty water) are cheaper and easier to extract. For example, a brine exists beneath the solid salt surface at the Salar de Uyuni in Bolivia and below the solid salt surface of the Salar de Atacama in Chile. This brine just needs to be pumped to the surface, dried, and then the minerals must be separated.

Sedimentary processes form the brines. These processes were introduced in Unit 1 of this module and will be reinforced in Unit 4.

Mining concerns (for lithium brine). Whether or not mining will happen depends on a variety of factors, including:

Photos from the references below can be used to view examples of lithium brine mining.

Cobalt: An Example of More Conventional Metal Mining in Idaho

Note: Most cobalt mining happens in Africa. There is an example of how to use the Unit 2 concept map dealing with cobalt and the wars in Congo. The mining example below deals with historic and proposed mines in the United States.

The Blackbird Mine in Idaho

The Blackbird Mining District in Idaho houses the largest deposit of cobalt in the United States. Mining at the Blackbird Mine peaked in the 1960s; it closed in 1982 and became a Superfund Site. The main pollution problem was acid mine drainage. "Acid rock drainage from the waste rock piles, the underground workings, the tailings impoundment, and tailings deposited along area creeks have resulted in the release of elevated levels of hazardous substances to the environment (groundwater, surface water, soils), including but not limited to copper, cobalt, and arsenic. These releases have contributed to the elevated levels of dissolved copper and cobalt in Panther Creek and its tributaries. Contaminated soil, sediments, water rock, and tailings were also released from the Blackbird Mine site during high water flows from thunderstorms and snowmelt and deposited in soil along the banks of downstream creeks. Investigations showed that irrigation also spread contaminated material along Panther Creek in the over-bank soil as well as pastures. The fisheries and aquatic resources downstream of the Blackbird Mine have been impacted by arsenic, copper, and cobalt releases." (Office of Environmental Cleanup, 2003) 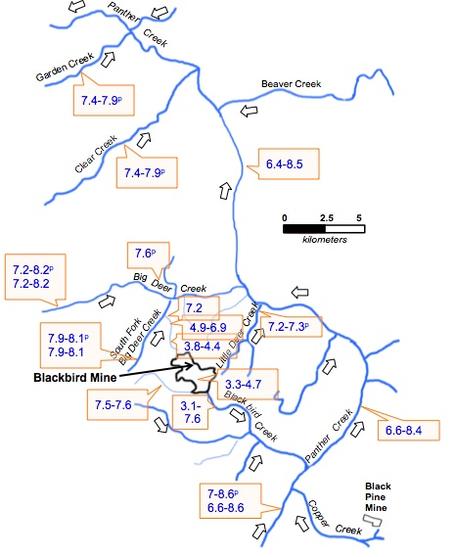 Hide
Map showing Blackbird Mine area (with north being the top of the map). The block arrows show the directions the streams flow. Boxes show pH values measured in streams or springs; the p superscript indicates pH values measured (mostly) before mining activities started. Data from and map after Mebane, 1994. 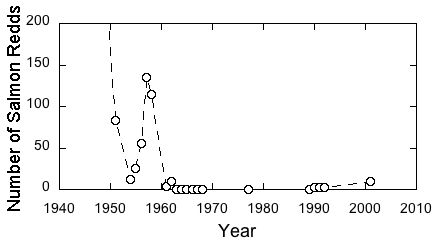 Hide
Observed numbers of Chinook Salmon redds in Panther Creek. Data from Mebane, 1994 and 2000-2013 data from Idaho Fish and Game database. The female creates a depression in the stream sediments (a redd), in which she lays her eggs. 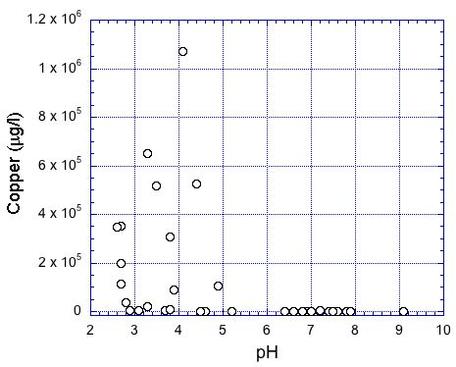 ×
Measured concentrations of copper dissolved in water as a function of the water's pH in waterways near Blackbird Mine. Data from Mebane, 1994.

Questions for discussion (see graphs and figures to the right): Peak mining activities at Blackbird Mine happened in the 1960s. What happened to the amount of salmon breeding in Panther Creek during this time? What clues suggest that mining impacts the pH of water? What happens to the concentrations of metals dissolved in water when the pH changes?

Cobalt mining will resume in the area once the Idaho Cobalt Project finishes constructing its new underground mine (see the website linked below for photos of the mine construction). There will be a nearby mill and the concentrate will be shipped to a cobalt production facility located in state. The rocks are broken underground and brought to the surface. In the mill, rocks containing the metal ore are broken into fine particles, and then a process called flotation separates desired minerals (in this case, copper, gold, and cobalt) from other minerals.

Waste rock, the rock that does not contain ore but that is smashed and brought to the surface during mining, will be used to fill the underground tunnels after mining. In the meantime, the waste rock will be piled on site.

Metal mining typically produces a lot of waste. The proposed Idaho mine, for example, will produce 32 dry tons of concentrate (the cobalt, gold, and copper mixture that will be sent to the production facility) and 768 dry tons of tailings (the pulverized rock particles that are the byproduct of flotation). Some of the tailings will also be used to backfill the mining tunnels. The others will be stored in lined tailings ponds (water cannot escape through the liners but is instead drained by a included system). Once full, the tailings will be capped, and covered with soil and vegetation.

Once mining operations cease, the land will be reclaimed. The water storage pond will be drained, graded (to look like the natural surroundings), and covered with soil and vegetation. The mill buildings will be demolished and removed. The waste rock piles will be removed and the rock used to fill the tunnels. Any unnecessary roads will be removed. Ideally this process of reclamation will return the land to its pre-mining state.

Mining concerns. The success of mining depends on a variety of factors, including:

Environmental and social concerns of the new cobalt mine include: