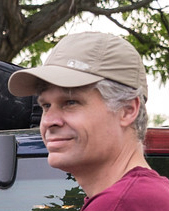 An introductory general education course for non-majors that also serves as one of 4 gateways to the major.

Hide
The Earth is a dynamic planet, as tsunamis, hurricanes, earthquakes, and volcanic eruptions make tragically clear. The very processes that lead to these natural disasters, however, also make life itself possible and create things of beauty and wonder. In this course we will study the forces and processes that shape our natural environment. Topics range in scale from the global pattern of mountain ranges to the atomic structure of minerals and in time from billions of years of Earth history to the few seconds it takes for a fault to slip during an earthquake. Hands-on activities and short field trips complement lectures to bring the material to life--so put on your hiking boots and get ready to explore our planet.

Hide
Course Goals:
After this course students will:
Topics:

My course is an introductory physical geology course that blends hands-on activities that might bet traditionally covered in a separate lab with lecture. I believe that an understanding of the climate system is important for my students in order to understand surface processes, and global change. The interactive and hands-on nature of the module led students to develop a clear understanding of Earth's radiation balance and the importance of the atmosphere in maintaining this balance. Students successfully applied this knowledge later in the semester when discussing temporal and spatial patterns of weathering and sedimentary environments. The use of volcanic forcing in the module's capstone was a nice connection to solid earth topics covered earlier in my course.

"My students are all very aware of climate change. The activities in this module helped them to develop a clearer understanding of the physical processes of the climate system, their interactions and how perturbations to this system can lead to global changes."

I used the materials as written, but due to the structure of my course meeting times I decided to teach the units focused on the radiation balance (1 and 4) in the first 3 hour class period and then moved on to the atmospheric focused units (2, 3, 5, and 6) in the second week.

My course is 13 weeks long and the module was taught in weeks 5 and 6. This module served as a bridge between solid Earth topics covered in the first 4 weeks and surface process topics covered in weeks 7-10. Module material was referenced in discussions of weathering and soil development in the week following the module and in discussions of global change in the last 3 weeks of the course.

I collected and graded the student assignments for the radiation jigsaw and optional atmospheric circulation jigsaw as well as the volcano take-home and capstone assignment. Students also completed a number of in-class and take home assignments that were not graded (self or formative assessments). The students expressed anxiety about the number of assignments and a lack of clarity in the instructions for the assignments. We are addressing both of these problems in our revisions.

I hoped that by using this module in my course that students would have a clearer understanding of the basic workings of the climate system and how it responds to a variety of forcings, including increasing atmospheric CO2 concentration associated with fossil fuel burning. Based on our discussions of global change later in the semester as well as performance on exam questions I would say that the module was a success.