The unit serves as a summation of all previous units to develop a flood inundation extent for different geological areas of the United States. Streamflow data, flood frequency analysis, and hydraulic simulations are performed, and a written report summarises the comparison of flood inundation during three return periods.

Constructing Explanations and Designing Solutions: Apply scientific reasoning, theory, and/or models to link evidence to the claims to assess the extent to which the reasoning and data support the explanation or conclusion. HS-P6.4:

Systems and System Models: Models can be used to predict the behavior of a system, but these predictions have limited precision and reliability due to the assumptions and approximations inherent in models. HS-C4.4:

The Roles of Water in Earth's Surface Processes: Water continually cycles among land, ocean, and atmosphere via transpiration, evaporation, condensation and crystallization, and precipitation, as well as downhill flows on land. MS-ESS2.C1:

This material was developed and reviewed through the GETSI curricular materials development process. Final review and editing is pending.

Final review, editing, and approval by GETSI for this material is still pending.
This page first made public: Dec 5, 2019

This unit serves as the Summative Assessment for the module. Data sets are provided for students to apply concepts learned in prior units to a new scenario. As with Unit 4, this unit uses HEC-RAS. It can be done by students largely outside of class time. 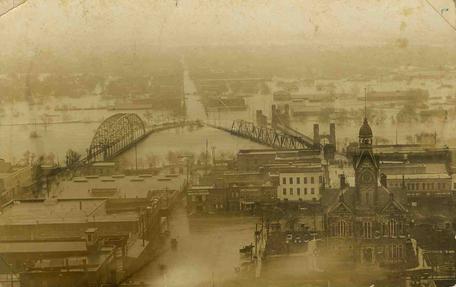 ×
Damage from the 1910 flood of the Brazos River in Waco, Texas. In this unit, students will be able to calculate the return periods of floods along rivers such as the Brazos.

Provenance: Source: https://www.flickr.com/photos/texascollectionbaylor/6144156207
Reuse: This item is offered under a Creative Commons Attribution-NonCommercial-ShareAlike license http://creativecommons.org/licenses/by-nc-sa/3.0/ You may reuse this item for non-commercial purposes as long as you provide attribution and offer any derivative works under a similar license.

The content of Unit 5 is appropriate for advanced geoscience, earth science, civil engineering courses at the junior and/or senior level in which the basics of hydrology and hydraulics are taught. Some of the concepts in the unit are little advanced for a junior level class, so it is recommended to do it later in the course, when students have learned about open channel hydraulics and Manning's equation. Unit 5 is intended for use as a summative assessment for the entire Flood Hazard module and gives students the opportunity to apply the knowledge and skills learned in Units 1-4 for creating a flood inundation map for a new river reach that has not been used in the earlier units. Most likely it would not be possible to use this unit without first also doing at least Unit 4: Hydraulic Modeling and Flood Inundation Mapping using HEC-RAS.

As Unit 5 serves as the summative assessment for the entire Flood Hazard module, the teaching material mainly includes the data and the model that students will need to complete for this unit. There is no new instructional material for this unit, so students should be referred to material from Units 2-4 for completing this unit. Unit 5 can be assigned as an assignment outside of class. Little class time is needed other than to introduce the assignment (which can be done early in the module) and answer student questions as they arise.

HEC-RAS models for multiple reaches are provided here, and the instructor can pick one reach for Unit 5 or distribute different data sets to different students. A presentation is provided to give a brief overview of the reaches and the corresponding models. The student exercise does not specifically ask for exploring societal impacts by looking at any infrastructure data, but a KMZ file is provided for these sites if the instructor wishes to include this part in the exercise. Students can overlay the infrastructure KMZ file with the inundation map in Google Earth to explore the impact of 100- and 500-year inundation on existing infrastructure. If the instructor chooses to select another reach relevant to his/her geographic interest, it is important to make sure that there is a stream gauge at that reach for conducting the flood frequency analysis and that the HEC-RAS model for the reach is available/created for students to perform the hydraulic simulations.

The student exercise consists of the following four parts:

Unit 5 serves as the summative assessment for the flood hazard module.