Students analyze and interpret empirical data with mathematical techniques to identify seasonal and long-term vertical motion Earth's crust due to precipitation and withdrawal of groundwater for irrigation. They write a report of their analyses and create an argument about what the evidence indicates about sustainability and human use of groundwater.

Constructing Explanations and Designing Solutions: Construct and revise an explanation based on valid and reliable evidence obtained from a variety of sources (including students’ own investigations, models, theories, simulations, peer review) and the assumption that theories and laws that describe the natural world operate today as they did in the past and will continue to do so in the future. HS-P6.2:

Cause and effect: Empirical evidence is required to differentiate between cause and correlation and make claims about specific causes and effects. HS-C2.1:

Earth's Systems: Plan and conduct an investigation of the properties of water and its effects on Earth materials and surface processes. HS-ESS2-5:

Earth and Human Activity: Use a computational representation to illustrate the relationships among Earth systems and how those relationships are being modified due to human activity. HS-ESS3-6:

GPS data can measure ground elevation change in response to the changing amount of groundwater in valleys and snow cover in mountains. In this module, students will learn how to read GPS data to interpret how the amount of groundwater in the Central Valley of California is changing, in particular in reaction to the 2012–2015 drought. They will then apply the skills they develop and knowledge they gain to demonstrate their understanding of how GPS data has implications for the future of groundwater resources in California.

Hide
Online-ready: All exercises are electronic and could be done individually or in small online groups. Lecture as currently provided is best done in synchronous format to retain interactive components.
Used this activity? Share your experiences and modifications 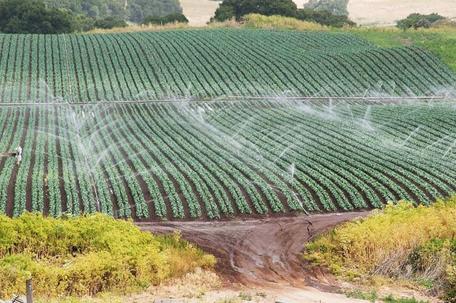 ×
Crops being watered in central California. The effects of depleting groundwater on ground movement is analyzed in this unit through time-series GPS data. From Lance Cheung.

Provenance: From https://commons.wikimedia.org/wiki/File:USDA_Irrigation_2011.jpg
Reuse: This item is offered under a Creative Commons Attribution-NonCommercial-ShareAlike license http://creativecommons.org/licenses/by-nc-sa/3.0/ You may reuse this item for non-commercial purposes as long as you provide attribution and offer any derivative works under a similar license.

The content for Unit 4 is appropriate for introductory geology, environmental science, and other geoscience courses; sophomore-level courses in which hydrology, geodesy, and/or climate studies are being introduced; or non-geoscience courses where climate studies and/or the nature and methods of science are being investigated. Unit 4 activities can easily be adapted to serve small- or large-enrollment classes. They are designed to be flexible in their context and can be executed in lecture and lab settings as an in-class activity, a homework activity, and/or a collaborative lab exercise. For example,

In the Measuring the Earth with GPS module, this unit can be used in sequence with the other units or alone. However, we recommend that it is used after Unit 3: Glaciers, GPS, and Sea Level, because the glaciers unit develops skills that students will then build on in this unit. This unit can be used as a summative assessment of the Measuring Earth with GPS module. This unit is an adaptation of the upper division module Measuring Water Resources - Unit 3: Monitoring Groundwater Storage with GPS Recording Vertical Position. Another introductory module that address water resources using other data sets besides GPS is Eyes on the Hydrosphere: Tracking Water Resources.

This brief lecture introduction provides context for Unit 4 by introducing students to: 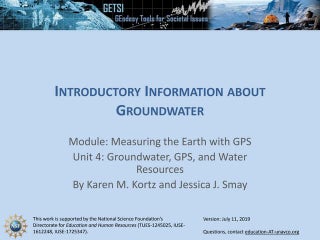 Show How to Turn the Introduction into a Gallery Walk

Hide
If students are already familiar with groundwater concepts and budget (or after they are briefly introduced), the discussion questions on the slides could instead be presented as a gallery walk. The following prompts can be used for the gallery walk:

In this activity, students will be guided to learn how to describe scientific data by making careful observations of it. Students will conclude by using that data to test predictions they made using multiple working hypotheses. The questions guide students through the process that scientists use when they work to solve scientific questions. This particular activity uses data from a GPS station in Puerto Vallarta, Mexico, to better understand the impact precipitation has on the vertical motion of the ground.

Students can complete this handout as homework, in-class individually or in small groups, or in a lab in small groups. The graphs in the handout itself should be supplemented with the large version for easier readability (see below)—if students are working in groups, one large set of graphs per group is enough. If this is done in class, suggestions for formative assessment discussions are given in the teaching tips, below.

If students completed the Unit 3: Glaciers, GPS, and Sea Level unit and understand correlation, then Activity 1 could be skipped, although they may need to learn the concept of correlation before completing Activity 3.

In this activity, students will watch an animation that illustrates how GPS can be used to determine the changing amount of snow cover in mountains and groundwater in valleys. It describes the relationship between changing water resources (snow cover, groundwater) and vertical bedrock motion.

In this activity, students will learn how to analyze and interpret scientific data after describing it. Students will conclude by using that data to support a recommendation they make about an issue relevant to society. The questions guide students through the process that scientists use when they work to solve scientific questions. This particular activity uses data from GPS stations in the Sierra Nevada Mountains and the Central Valley in California to better interpret long-term water resource trends that can be interpreted by analyzing GPS position of the ground.

Students use four GPS stations throughout the activity. In the first part of the activity, they are directed to observe and describe the set of data for only two of them, and then work with students who described the set of data for the other two stations. This initial work can be done individually as homework, in class individually or in pairs, or in lab individually or in pairs. The instructor will need to ensure that equal numbers of students describe the two sets of GPS data, either by allowing student groups to divide them up between themselves or by assigning GPS sets. When they are directed in the activity, students working on the two sets of GPS data should compare their observations and work together to analyze and interpret all four sets of GPS station data, resulting in them working in pairs or groups of four for the remainder of the activity.

Show How to Turn Activity 3 into a Jigsaw

Hide
The description above is for a simplified Jigsaw, where students work on separate pieces of data and then combine that data to solve the larger problem. It can be turned into a full-scale [link https://serc.carleton.edu/sp/library/jigsaws/index.html 'Jigsaw', by having four teams of students describe each of the four GPS station data for Activity 3 of the activity. Then, students reform into mixed groups, with one representative from each team, to complete the activity.

The GPS graphs in the handout itself should be supplemented with the large version for easier readability (see below)—if students are working in groups, one large set of graphs per group is enough. During the activity, students will reach the point where they need the additional location data, precipitation data, and data on groundwater withdrawal impact on society. Those data should be given to each group at that point; they should not be given to the students before, since they give away answers when students are making predictions.

All graphs and original data files

Below are files with handouts, graphs, and data used throughout Unit 4. GPS data come from https://www.unavco.org/instrumentation/networks/status/pbo and http://geodesy.unr.edu/NGLStationPages/gpsnetmap/GPSNetMap.html.

Activities 1 and 2 can be assessed formatively by using some of the questions as prompts for discussions, as described above in Teaching Notes and Tips. In addition, if the students are working in class or lab on the questions, the instructor can circulate and listen to student conversations and answer questions to ensure that the desired learning is occurring.

Resources quoted in the additional data for Student Activity 4.3: