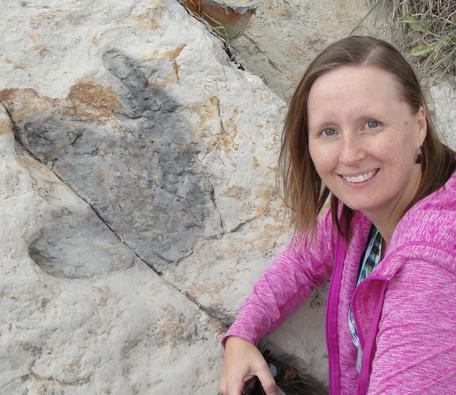 ×
Professor Jessica Smay next to an iguanodon footprint

Provenance: Jessica Smay, San Jose City College
Reuse: This item is offered under a Creative Commons Attribution-NonCommercial-ShareAlike license http://creativecommons.org/licenses/by-nc-sa/3.0/ You may reuse this item for non-commercial purposes as long as you provide attribution and offer any derivative works under a similar license.

Hide
By the end of the course, students should be able to:

The module was used primarily in my lab course, but the PowerPoint material was covered in the lecture or at home as homework. The lab is optional; this semester all of the lab students were also enrolled in the lecture, so I was able to include the background learning in the lecture and the group activities as part of the lab. Unfortunately, this semester I had a high attrition rate, and ended the semester with 9 students. These 9 students were strong students, and they really bonded as they worked through these activities.

I like how it showed students how science relates to their everyday lives, both in the techniques used (like GPS on their phones) and in the repercussions of the findings.

I used the PowerPoint parts of the module in my lecture course, and the group activities in the lab course. Otherwise, I did not make changes.

Relationship of GETSI Materials to My Course

My course is 16 weeks long. I introduced GPS via the presentations in week 8 of my lecture class. The activities for Units 1 and 2 were in week 8 and 9 in the lab course. Unit 2 relates to plate tectonics and earthquakes, which I had covered in my lecture course by then. In particular, I wanted to have covered plate motions and the elastic rebound theory. Units 3 and 4 were in week 13 and 14 of the lab course. They related to glaciers and groundwater, so I wanted to already cover those in the lecture as well. In particular, I wanted to have covered what an aquifer is. Because the lab course was a subset of the students from the lecture course, I did not talk about the lab material in lecture, but I did talk about the lecture material in lab.

Because I had a very small class, I was able to grade all parts of the whole module. However, for Units 2, 3, and 4, if I have a large class, I would either collect one Activity 1 and 2 for each group, and grade individuals for Activity 3, or I would have each student turn in the whole packet and grade for completeness and choose specific questions for a correctness grade.
Besides grading each lab and giving feedback, I gave a final exam that included a few multiple-choice questions and a GPS graph with a long-answer question in the same style as the previous "letter" questions on the labs.

Some of the labs in my course were focused on learning content and less about analyzing and interpreting data. As this was likely the last science class many of these students would take, I wanted them to have more practice with data. I also wanted them to build confidence in working with data. The setup of Units 2, 3, and 4 were similar (Activity 1: Observe and describe GPS data and learn basic information. Activity 2: watch an animation and fill in a worksheet. Activity 3: Analyze and interpret GPS data and apply it to a particular societal situation by writing a letter). By the time students got to Unit 4, they were familiar with this setup, worked with similar data several times, and were able to build confidence in their increasing skill to do science.

Another thing missing from many of my previous labs was a link to society. This module really helped my students work with scientific data sets in a context that was relevant to society. Working with groundwater data and earthquake data was particularly interesting to my students, as these were issues that many of them had heard about in the news.

One last goal for my students was for them to be able to communicate science. Discussing the letters each time brought awareness to the importance of communicating science, particularly using data to support statements. For the first letter or two, many students wrote very generic statements about the data, but by Unit 4 they understood that when they made a statement, they should support it with a specific description and numbers.